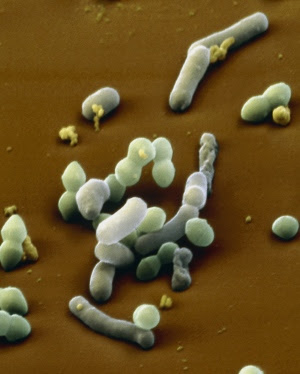 Eye of Science/SPL
Researchers are studying how gut bacteria such as Lactobacillus (grey) interact with the body.
The human body teems with trillions of microorganisms — a microbial landscape that has attracted roughly US$500 million in research spending since 2008. Yet with a few exceptions, such as the use of faecal transplants for treating life- threatening gut infections or inflammatory bowel disease, research on the human microbiome has produced few therapies.
That is poised to change as large pharmaceutical companies eye the medical potential of manipulating interactions between humans and the bacteria that live in or on the body.
On 2 May, drug giant Pfizer announced plans to partner with Second Genome, a biotechnology firm in South San Francisco, California, to study the microbiomes of around 900 people, including those with metabolic disorders and a control group. “We are looking at using this as one piece of a puzzle to understand an individual,” says Barbara Sosnowski, vice-president of external research and development at Pfizer in New York. A day earlier, Paris-based Enterome revealed that it had raised €10 million (US$13.8 million) in venture capital to develop tests that use the composition of gut bacteria to diagnose inflammatory and liver diseases.

Experts predict that the next few months will see a boom in such partnerships and investments, and that new microbiome-derived drugs and therapies will come to market within a few years.
Probiotics, or beneficial gut bacteria, have become a popular therapy in recent years. Television advertisements feature celebrities toutingBifidobacterium-laced yogurt, and consumers flock to buy pills that contain Lactobacillusto quell their gut disturbances and other ailments. But many physicians and scientists doubt the effectiveness of such remedies. “Probiotics may be relatively safe, but not particularly potent in terms of modifying diseases or symptoms,” says Joseph Murray, a gastroenterologist at the Mayo Clinic in Rochester, Minnesota.
But as scientists come to understand the mechanisms by which specific bacteria affect the body, many think that they can pinpoint the right combination of microbes to treat different conditions. Others aim to develop molecules that mimic a beneficial bacterium–host interaction, or block a harmful one. “Undoubtedly, the microbiome is a  little drug factory in our intestine,” says Justin Sonnenburg, a microbiologist at Stanford University in Palo Alto, California.
Murray’s group, for example, has reported that feeding the gut bacterium Prevotella histicola to transgenic mice engineered to have human-like immune systems can suppress the inflammation caused by multiple sclerosis and rheumatoid arthritis. His team is hoping to develop this into a therapy with biotech firm Miomics in New York. Similarly, Vedanta Biosciences in Boston, Massachusetts, is conducting preclinical trials of a pill containing microbes that suppress gut inflammation (Y. Furusawa et al. Nature 504, 446–450; 2013).
And last June, Second Genome announced a deal with Janssen Pharmaceuticals of Beerse, Belgium, to study the microbial populations of people with ulcerative colitis, in the hope of identifying new drugs and drug targets. Although Second Genome remains vague about the details of its products, president Peter DiLaura says that the company hopes to find small molecules and biological compounds such as proteins that can tweak the microbiome to ease diabetes and autoimmune disorders.
Meanwhile, one of Second Genome’s  scientific consultants, bioengineer Michael Fischbach of the University of California, San Francisco, is developing tools to identify  molecules found on bacteria or produced by them, and which bind to receptors on human cells and affect the immune or nervous  systems. “It’s not just a drug-like molecule — it’s a real drug being produced,” he says.

Changing the balance of ‘good’ and ‘bad’ bacteria in the gut microbiome can also influence health — inflammation, for example, or even depression and anxiety. Researchers may already have a wealth of ready-made medications that can alter this equilibrium. Drugs and small molecules that have been discarded because they are not absorbed by the intestine may help to target the gut microbiome specifically, treating it as an organ. Sonnenburg’s team, for instance, has found that a compound called sialic acid builds up in the intestine and helps harmful bacteria to take over the gut when antibiotics have killed off helpful bacteria. The researchers  are now investigating whether treating mice with compounds similar to sialic acid can inhibit this harmful transformation (K. M. Ng et al. Nature 502, 96–99; 2013).
And Microbiome Therapeutics, a biotechnology company in Broomfield, Colorado, is currently conducting clinical trials with two small molecules that select for ‘good’ gut bacteria to help people with diabetes to take up insulin more easily. Chief executive Steven Orndorff says that the company plans to present the first results from the trials next month at an Endocrine Society conference in Chicago, Illinois.
Other companies are turning the microbiome into a diagnostic tool. Enterome has created a genetic-sequencing platform that detects changes in stool microbes that warn of the onset of disorders such as inflammatory bowel disease. The firm has tracked progression of the disease in 100 such patients in a bid to avoid invasive colonoscopies.
Getting microbiome-inspired therapies to market presents a number of challenges, however. Small molecules such as those developed by Microbiome Therapeutics may be able to go through the normal drug regulatory pathway. But there may be a different or new set of regulatory hurdles for genetically modified bacteria — for example, those in development by Ghent-based ActoGeniX in Belgium and ViThera Pharmaceuticals in Cambridge, Massachusetts — that deliver anti-inflammatory agents to the gut. Other issues, including intellectual-property rights for naturally occurring bacteria, may complicate the path of products to market.
Although small start-up firms can be flexible in navigating these issues, funding and guidance from pharmaceutical giants can only help, says Bernat Olle, chief operating officer of Vedanta. In 2013, for example, Vedanta struck a deal with Johnson & Johnson, based in New Brunswick, New Jersey, to develop potential therapies for inflammatory bowel disease and other autoimmune disorders.
Pierre Belichard, Enterome’s chief executive, says that such investment has been a long time coming — but companies are now flocking to microbiome research. “Doctors have been asking questions about why this new and fascinating world of  science is not seen as a place to put money in,” he says. “Until the beginning of this year, that was a very good question.” Now, he says, investors “all want a microbiome company in their portfolio”.