Systematic molecular/genomic epidemiology studies for tuberculosis surveillance cannot be implemented in many countries. We selected Panama as a model for an alternative strategy. Mycobacterial interspersed repetitive unit–variable-number tandem-repeat (MIRU-VNTR) analysis revealed a high proportion (50%) of Mycobacterium tuberculosis isolates included in 6 clusters (A–F) in 2 provinces (Panama and Colon). Cluster A corresponded to the Beijing sublineage. Whole-genome sequencing (WGS) differentiated clusters due to active recent transmission, with low single-nucleotide polymorphism–based diversity (cluster C), from clusters involving long-term prevalent strains with higher diversity (clusters A, B). Prospective application in Panama of 3 tailored strain–specific PCRs targeting marker single-nucleotide polymorphisms identified from WGS data revealed that 31.4% of incident cases involved strains A–C and that the Beijing strain was highly represented and restricted mainly to Colon. Rational integration of MIRU-VNTR, WGS, and tailored strain–specific PCRs could be a new model for tuberculosis surveillance in countries without molecular/genomic epidemiology programs.
Tuberculosis (TB) control depends on rapid diagnosis, efficient therapy, and control of transmission. New genotyping strategies in Mycobacterium tuberculosis have led to development of molecular epidemiology strategies that enable clarification of TB transmission dynamics (1–4). PCR-based molecular epidemiology approaches, namely mycobacterial interspersed repetitive unit–variable-number tandemrepeat (MIRU-VNTR) are being replaced by genomic epidemiology approaches. These approaches are based on the identification of single-nucleotide polymorphisms (SNPs) using whole-genome sequencing (WGS) (5), which offers higher discriminatory power and precision in assigning transmission clusters (6).
The national TB-control programs of many resource-constrained countries with a high TB prevalence lack systematic molecular epidemiology analysis (7). These countries face insurmountable obstacles to availability of genomic epidemiology programs. Panama is an example of a country that, despite recently being classified in the upper-income category, has not implemented a systematic molecular/genomic epidemiology–based surveillance program (7). The lack of such a program, together with other limitations, means that Panama now has the second highest incidence of TB in Central America and the highest TB death rate (8). The recent expansion of the Panama Canal has attracted migrants into the country, which probably has affected host-country TB epidemiology, as reported in other settings (8–10).
The convergence of these circumstances made Panama ideal for evaluating an alternative simplified approach for optimized surveillance of TB transmission. We based our effort on a rational application of MIRU-VNTR, subsequent WGS analysis of clustered representatives, and final tailoring of allele-specific oligonucleotide PCR (ASO-PCR) for local prospective targeted surveillance of TB cases.

The retrospective study sample comprised 94 M. tuberculosis isolates from diagnostic specimens of patients with symptomatic respiratory disease (excluding those under treatment) from 19 health centers and hospitals in Panama and Colon provinces in 2015. This convenience sample comprised 80 isolates from Panama and 14 from Colon. These 2 provinces provided 660 TB cases in 2015; thus, the convenience sample represented 14.4% of TB cases from that year. Among the 91 isolates with susceptibility data, 84 (89.4%) were pansusceptible, 6 (6.4%) were monoresistant to isoniazid (2.1%) and rifampin (4.3%), and the remaining 1 (1.1%) was multidrug-resistant (MDR) (Table). We also included additional prospective isolates from Colon and Panama (January–August 2018), selected following the same selection criteria as the retrospective strain collection.

WGS was performed in Hospital Gregorio Marañón (Madrid, Spain) as detailed elsewhere (14) on 2–3 representative isolates of each cluster. We generated DNA libraries following the Nextera XT Illumina protocol (Nextera XT Library Prep kit [FC-131–1024]; Illumina, https://www.illumina.com). Libraries were run in a MiSeq device (Illumina) by applying a paired-end reading procedure. We mapped the reads for each strain by using the ancestral M. tuberculosis complex genome, which was identical to H37Rv in terms of structure but with the ancestral alleles inferred by using a maximum-likelihood approach (15). SNP calls were made with SAMtools (http://samtools.sourceforge.net/) and VarScan (http://varscan.sourceforge.net/) (coverage of at least 20-fold, mean SNP mapping quality of 20) (14,16). From the variants detected, we kept only the homozygous calls (those present at a specific position in >90% of the reads). Moreover, to filter out potential false-positive SNPs attributable to mapping errors, we omitted the variants detected in repetitive regions, phages, and Pro-Glu (PE)– and Pro-Pro-Glu (PPE)–rich regions. In addition, we omitted SNPs close to insertion/deletions (10-bp window) and those in areas with an anomalous accumulation of variants (>3 SNPs in 10 bp). Alignments and SNP variants were visualized and checked in IGV version 2.3.59 (http://software.broadinstitute.org/software/igv). A cutoff of <12 SNPs was used to consider 2 isolates as clustered due to recent transmission, as defined in Walker et al. (6). We deposited the sequences obtained in EMBL-EBI (http://www.ebi.ac.uk [accession nos. PRJEB23681 and PRJEB29408] and http://bioinfo.indicasat.org.pa).

For MIRU-VNTR–defined clusters A, B, and C, we identified the strain-specific SNPs after comparing WGS data with a database containing 4,598 sequence genomes from strains circulating throughout the world (A. Chiner-Oms, unpub. data). We selected 3 strain-specific SNPs for cluster A and 4 for clusters B and C to be targeted by a multiplex ASO-PCR (Appendix Table 1). We designed these ASO-PCRs to ensure the presence of amplification patterns, regardless of the strain analyzed. For cluster A, we designed 1 selective primer (SNP2) to target the allele found in the cluster A strain, whereas the 2 remaining primers (SNP1 and SNP3) targeted the alternative alleles, as expected in any other non-A strain. For clusters B and C, 2 primers (SNP1/SNP4 and SNP3/SNP4, respectively) targeted the alleles found in strains B and C, whereas the remaining SNPs targeted the alternative alleles. The size of the amplicons was calculated to rule out overlap and led to different band patterns in each case (Appendix Table 1). We fixed the final PCR protocols (Appendix Tables 1, 2) after evaluating multiple experimental conditions until the expected patterns for the strains surveyed and a set of different control strains were confirmed.
The ASO-PCR design and optimization were conducted in Hospital General Universitario Gregorio Marañón (Madrid, Spain). The data were transferred to be applied at the National Tuberculosis Reference Laboratory in Gorgas Memorial Institute in Panama City.
Top

In MIRU-VNTR analysis, 47 (50.0%) of the M. tuberculosis retrospective isolates from Panama and Colon provinces grouped into 6 clusters, A–F. Four clusters (A–D) comprised 7–14 isolates each; the remaining 2 were smaller (E, 3 isolates, and F, 2 isolates) (Appendix Figure). Most (87%) isolates corresponded to lineage 4; 7.4% corresponded to lineage 2. Sublineages for the largest clusters corresponded to Beijing (cluster A) and Haarlem (cluster B), Latin American–Mediterranean (cluster C), and H37Rv-like (cluster D) (Table). Clusters A and F consisted mostly of cases from Colon; the remaining 4 clusters consisted mostly of cases from Panama. Clusters A, D, and F corresponded exclusively to pansusceptible strains; clusters B, C, and E each included 1 isolate that was monoresistant to rifampin.

Representative isolates (2 each from clusters A and B and 3 from cluster C) were available for a more in-depth analysis by WGS in Madrid, Spain. The sequences obtained offered a depth of coverage of 20×–55×, with a Phred score >20. The short pairwise distances (1–3 SNPs) for cluster C were consistent with recent transmission. However, 17 SNPs were found between the isolates in cluster A, and 20 SNPs were found between the isolates in cluster B, which was more consistent with the higher diversity expected for clusters involving long-term prevalent strains. 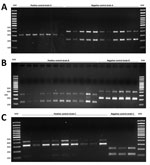 Figure 1. PCR products for allele-specific oligonucleotide PCRs for Mycobacterium tuberculosis cluster A, cluster B, and cluster C strains on a selection of representative strains A, B, and C and a selection of...
Once we identified the coexistence of 1 cluster due to active recent transmission with 2 clusters that were more likely to be prevalent, ASO-PCRs were designed in Madrid with 2 objectives: 1) prioritize the targeted surveillance of the actively transmitted cluster C; and 2) facilitate capture of new cases involved in clusters A and B with the aim of completing the phylogenetic reconstruction of long-term clusters. We designed 3 multiplex ASO-PCRs to target 3 SNPs for cluster A, 3 for cluster B, and 4 for cluster C (Appendix Tables 1, 2). We used all representatives for clusters A and C and 12 of 14 of those in cluster B as positive controls, and we detected the expected amplification patterns. Forty-nine Beijing isolates other than A strain, 46 Haarlem isolates other than B strain, and 36 Latin American–Mediterranean isolates other than C strain were also used as negative controls of the strains targeted. In all cases, the expected patterns were obtained for the non–A–C control isolates (Figure 1).

Prospective Implementation of the ASO-PCR–Based Strategy

We used 51 prospective isolates from Colon and Panama collected during 2018 to evaluate the performance in situ of the 3 sets of cluster A–C–specific ASO-PCRs. The amplification patterns obtained in Madrid in the optimization step were now reproduced exactly in Panama. Cluster A PCR revealed 13 (25.5%) patients infected by Beijing strain A of the total sample, 11 from Colon, and 2 from Panama. Cluster B PCR identified 1 (1.9%) patient infected by strain B and 2 (3.9%) patients infected by strain C; all 3 of these patients were from Panama province.
All the isolates not labeled as corresponding to strains A, B, or C by the strain-specific PCRs were genotyped by VNTR. None showed a pattern corresponding to the strains targeted, (they showed differences in >3 loci). This finding enabled us to rule out that we could be missing some strains related to the clusters targeted.

Figure 2. Networks of relationships based on whole-genome sequencing data of prevalent clusters (A, B) and active transmission cluster (C) in testing of a simplified model to survey tuberculosis transmission using data from...
We used WGS analyzed all cases (except 2 for strain A) captured by the ASO-PCRs to determine the network of relationships between the isolates (Figure 2). As expected, we observed lower SNP-based diversity acquired along a linear topology for cluster C, consistent with a sequential host-to-host recent-transmission nature for this cluster. In contrast, we found more SNPs, acquired along different branches, with several nonsampled nodes (median vectors, mv; Figure 2) for clusters A and B, more likely corresponding to prevalent strains that acquired higher diversity. In fact, for cluster A, this diversity was also detected by MIRU-VNTR; 4 isolates captured by the ASO-PCR showed single-locus variations.
Top