In this retrospective study, we used whole-genome sequencing (WGS) to delineate transmission dynamics, characterize drug-resistance markers, and identify risk factors of transmission among Papua New Guinea residents of the Torres Strait Protected Zone (TSPZ) who had tuberculosis diagnoses during 2010–2015. Of 117 isolates collected, we could acquire WGS data for 100; 79 were Beijing sublineage 2.2.1.1, which was associated with active transmission (odds ratio 6.190, 95% CI 2.221–18.077). Strains were distributed widely throughout the TSPZ. Clustering occurred more often within than between villages (p = 0.0013). Including 4 multidrug-resistant tuberculosis isolates from Australia citizens epidemiologically linked to the TSPZ into the transmission network analysis revealed 2 probable cross-border transmission events. All multidrug-resistant isolates (33/104) belonged to Beijing sublineage 2.2.1.1 and had high-level isoniazid and ethionamide co-resistance; 2 isolates were extensively drug resistant. Including WGS in regional surveillance could improve tuberculosis transmission tracking and control strategies within the TSPZ.
Tuberculosis (TB) is the leading infectious cause of death globally (1). To reduce the burden of TB, many countries committed to achieving a 90% reduction in TB incidence by 2035 as part of the End TB Strategy (2). Australia has already achieved preelimination targets (<10 cases/1 million population) in the nonindigenous, Australia-born population (3). However, achieving TB elimination in Australia remains a daunting challenge, given high population mobility, increased importation of TB cases from high-incidence settings, and cross-border spread from neighboring countries, such as Papua New Guinea (4). In 2013, ≈90% of the TB cases reported in Australia were in persons born overseas (3). The state of Queensland has one of the lowest TB notification rates in Australia (4.0 cases/100,000 population) (5); the Western Province of neighboring country Papua New Guinea has a significantly higher incidence, estimated at 2,901 cases/100,000 population at the provincial capital, Daru (6,7).

Figure 1. Communities within and boundaries of Torres Strait Protected Zone. Green arrow indicates Saibai Island, Australia; red arrow Mabaduan village, Papua New Guinea; and blue arrow Daru Island, Western Province Provincial Capital,...
Daru General Hospital (Port Moresby, Papua New Guinea) is the main health center that offers TB health services to residents of Western Province, including those in the surrounding areas, such as the Torres Strait Protected Zone (TSPZ). The TSPZ is an area where free bidirectional cross-border movement (without passports or visas) is permitted for purposes of traditional customs and economic activities (Figure 1); the zone was created with the signing of the 1978 Torres Strait Treaty by Papua New Guinea and Australia. This area contains a number of Papua New Guinea villages and 14 Australia island communities (estimated population 1,526) that are part of Queensland (9). Cross-border movement of populations within the TSPZ provides a potential route of entry of Mycobacterium tuberculosis into northern Queensland and its spread elsewhere in Australia.
In 2012, an Australia resident of the TSPZ was reported to have pulmonary TB resistant to streptomycin only. After initial improvement with standard therapy, the patient deteriorated clinically. Rifampin resistance was detected by Xpert MTB/RIF assay (Cepheid, http://www.cepheid.com), and multidrug-resistant (MDR) TB was confirmed after positive culture and drug susceptibility testing. The mycobacterial interspersed repetitive unit 24 (MIRU-24) profile of the new isolate differed from the initial isolate and was characteristic of TB strains in Western Province, indicating a possible reinfection with an MDR TB isolate (10). This incident was the first notified case of MDR TB in a citizen of Australia in the Torres Strait Islands. During outbreak epidemiologic investigations, 3 additional MDR TB diagnoses were made in citizens of Australia who were current or previous residents of the TSPZ. These 4 cases were epidemiologically linked through a network of close contacts. At the time of diagnosis, 2 of the patients were living in different Queensland cities distant from the TSPZ.
We sought to use whole-genome sequencing (WGS) to determine the genomic relationship between these isolates and the MDR TB isolates from Papua New Guinea as proof of principle for transmission of MDR TB through the TSPZ. The discriminatory power of WGS enables the delineation of TB transmission with a higher resolution than conventional genotyping (11,12). The aim of this study was to use WGS and epidemiologic data to determine strain diversity within the TSPZ, characterize geno-resistance markers, and identify potential risk factors for transmission.

All patients receiving TB diagnoses in Queensland (including Papua New Guinea citizens receiving TB diagnoses in Queensland clinics in the TSPZ) must be reported to the Queensland Department of Health in Brisbane. In this study, we included isolates from Papua New Guinea citizens residing in the TSPZ who received TB diagnoses in the TSPZ during January 1, 2010–December 31, 2015, which we refer to as cross-border TB isolates. We extracted demographic and clinical data from the Queensland Notifiable Conditions System on April 6, 2016. We included 1 patient given a TB diagnosis previously in Papua New Guinea who subsequently sought treatment in the TSPZ for extensively drug-resistant (XDR) TB; we also included the 4 previously mentioned MDR TB cases in residents of Australia because these infections were linked to the TSPZ. During the study period, a small number of drug-susceptible TB cases (n = 14) were reported among Australia citizens residing in the TSPZ, but we did not include these cases in this study.

Using ape library in R statistical package (http://cran.r-project.org), we calculated pairwise SNP differences (excluding SNPs in known drug-resistance genes) between isolates. We assessed SNP differences by lineage and compared these differences between different localities to set a threshold as a measure of putative transmission. We constructed genomic clusters using a median-joining network (Network version 5, http://www.fluxus-engineering.com/sharenet.htm). We structured links within genomic clusters assuming the existence of linear transmission among isolates from the same locality and putative transmission among isolates from different localities (if the SNP difference was within the limit of the threshold).

We compared patient characteristics using Fisher exact test. We performed univariate and multivariable logistic regression analyses to evaluate associations between patient characteristics and genomic clusters as outcome variables to infer transmission. We used R statistical package for all statistical analyses. This study was approved by the institutional review board of the University of Queensland (Brisbane, Queensland, Australia; approval no. HREC2015000572) and, as required by the Public Health Act of 2005, by Queensland Health (approval no. RD006697).
Top 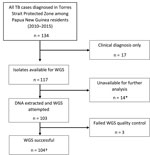 Figure 2. Flow diagram of included Mycobacterium tuberculosis isolates from Papua New Guinea citizens residing in Torres Strait Protected Zone, 2010–2015. *Isolates unable to grow or were contaminated. †Included were 4 additional isolates...
In total, 134 Papua New Guinea citizens were reported to have TB in the TSPZ during the study period (Figure 2), and 117 (87.3%) had culture-confirmed disease. We acquired and successfully sequenced 100 (85.5%) of 117 isolates from these citizens plus 4 isolates from the Australia citizens who resided or previously resided in the TSPZ. Isolates were sequenced with a mean coverage depth of 74 times (range 42–110 times) and mean coverage breadth of 98.5% (range 96.3%–99.8%). MIRU profiles were available for 98 of 104 patients (Appendix Table 2). Sequence comparisons revealed a median SNP difference of 31 (interquartile range [IQR] 24–38) for isolates with the same MIRU profile and 1,101 (IQR 1,066–1,119) for isolates with different MIRU profiles (Appendix Figure 1). SNP differences between all possible pairs within the data set were bimodal; 2 large peaks represent 2 different lineages. The possibility of cross-contamination among isolates with no SNP differences was negligible because specimens were processed and their DNA sequenced on different days. Of the 104 isolates sequenced, phylogenetic analysis revealed that 83, including the 4 MDR TB isolates from Australia citizens, were part of the modern Beijing sublineage 2.2.1.1 and 21 the Euro-American lineage, which consisted of 6 different sublineages (AppendixTable 3, Figure 2). Although the isolates were widely distributed throughout the TSPZ, 50% originated from a single Papua New Guinea village, Mabadauan (Appendix Figure 3).
Evolutionary analysis of the Beijing sublineage 2.2.1.1 isolates revealed that 59% (49/83) were related to clades previously identified in nearby Daru Island (Appendix Figure 4) (7) and 41% were a part of unique clades. The isolates from the Australia residents were clade C, which we inferred to have emerged in the 1980s.

Figure 3. Genomic clusters of highly drug-resistant tuberculosis cases among Papua New Guinea and Australia citizens residing or previously residing in the Torres Strait Protected Zone, 2010–2015, by lineage. The top shows the...
To determine links between isolates from the same and different localities, especially isolates from villages with high numbers of isolates from different lineages, we deduced a threshold of 8 SNPs to distinguish transmission links (Appendix Figure 5). We found 17 genomic clusters (14 Beijing lineage, 3 Euro-American lineage) constituting 74 isolates (65 Beijing lineage, 9 Euro-American lineage) among PNG citizens (Figure 3). In total, 89% (34/38) of isolates from Mabadauan (identified as Beijing lineage) and 100% (4/4) of isolates from Sigabadaru (characterized as Euro-American lineage) clustered. More cases (36/41) formed genomic clusters in 2011 than in any other year, indicative of enhanced transmission leading up to this time point (Appendix Figure 6). The number of isolates from the same locality that formed genomic clusters (41 Beijing, 5 Euro-American) was significantly higher than the number that formed among isolates from different localities (24 Beijing, 4 Euro-American; p = 0.0013). The median SNP difference was 2 (IQR 1–3) among genomic clusters from the same locality and 4 (IQR 2–6) among genomic clusters from different localities. Of the 4 Australia cases, 3 formed 1 MDR TB cross-border genomic cluster having 1 SNP difference and a 15-month difference in sample collection dates. The fourth isolate was linked to another MDR TB cross-border cluster with no SNP differences and a 5-month difference in sample collection dates, suggesting 2 independent episodes of cross-border transmission into Australia citizens.
Most cross-border TB isolates in Papua New Guinea residents (74%, 74/100) were found in young persons (<35 years of age) (Table 1), and male and female sexes were equally represented. Only 1 (1.4%) of 74 patients tested had HIV co-infection. No major differences in characteristics were detectable between patients infected with the Beijing and Euro-American lineage, except for drug resistance, which was strongly associated with the Beijing lineage (p<0.001).
Univariate analysis revealed that the Beijing lineage (odds ratio [OR] 6.190, 95% CI 2.221–18.077; p<0.0005) and resistance to first- and second-line TB drugs (OR 4.677, 95% CI 1.452–20.943; p = 0.019) were strongly associated with transmission (Table 2). In multivariate logistic analysis, we adjusted for these 2 characteristics, and this analysis showed the Beijing lineage was associated with transmission (adjusted OR 4.484, 95% CI 1.526–13.891). The HIV-infected patient was not part of a cluster.
Phenotypic drug susceptibility testing of all isolates showed that 53 (51.0%) were susceptible to all oral first-line drugs tested (Appendix Table 4); 1 showed streptomycin monoresistance. Drug-resistance patterns observed included 13.5% (14/104) with isoniazid and streptomycin co-resistance 31.7% (33/104) with MDR (1 pre-XDR with fluoroquinolone resistance), and 1.9% (2/104) with XDR. In 2010 and 2011, eleven TB cases were MDR or XDR (Appendix Figure 6). All MDR and XDR isolates, including the isolates from the 4 Australia citizens, belonged to clades C and D of Beijing sublineage 2.2.1.1. 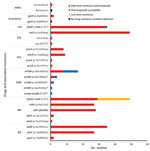 Figure 4. Correlation of phenotypic and genotypic drug resistance among modern Beijing isolates from Papua New Guinea and Australia citizens residing or previously residing in the Torres Strait Protected Zone, 2010–2015. No resistance...
Phenotypic and genotypic resistance profiles correlated, except for ethambutol (Figure 4). Of the 35 MDR and XDR isolates, which were also tested for second-line drug susceptibility, all carried the fabG1-inhA mutation (C15T), and 28 (80%) had high-level (0.4 µg/mL) isoniazid resistance. In total, 27 of these 28 had both ndh (ΔG304) and inhA (p.Ile21Val) mutations, and 1 had a katG (p.Trp191Arg) mutation. All the rifampin-resistant isolates had the same rpoB mutation (p.Ser450Leu), and 29 (82.9%) of 35 had compensatory mutations in the rpoC gene (27 p.Val483Gly and 2 p.Trp484Gly). Of note, nearly all isolates with compensatory rpoC mutations (28/29) and isolates with the fabG1-inhA mutation (48/49) were part of a genomic cluster. Of the 2 isolates with the p.Asp94Ala gyrA mutation conferring fluoroquinolone resistance, 1 was XDR; this isolate had pan–second-line injectable resistance associated with an rrs (A1401G) mutation. The second XDR isolate (from a patient previously treated in Papua New Guinea) had a p.Asp89Asn gyrA mutation and phenotypic kanamycin resistance without a detected mutation conferring aminoglycoside resistance. Mutations in genes potentially conferring resistance to newly available agents were not identified.
Top