The Stages of Sepsis

By Sara RydingReviewed by Lois Zoppi, BA
Sepsis is a potentially fatal or life changing syndrome wherein the body responds to an infection with a systemic immune response. Many clinicians consider sepsis to have three stages, starting with sepsis and progressing to severe sepsis and septic shock. Septic shock is the most serious stage and presents patients with the worst survivability odds, some as high as 50% mortality. 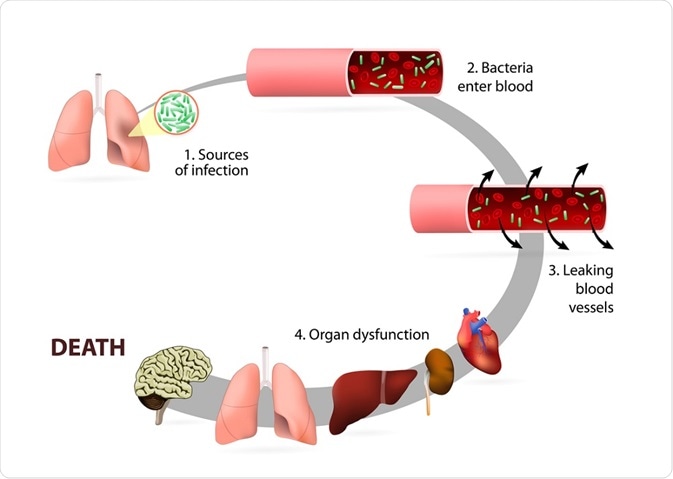 What are the three stages of sepsis?

Sepsis can be hard to identify, but is typically denoted by a very high or low body temperature, high heart rate, high respiratory rate, high or low white blood cell count and a known or suspected infection. The aforementioned signs are actually used to identify Systemic Inflammatory Response Syndrome (SIRS), which only becomes sepsis when an infection is present.
SIRS is, in some circles, a more commonly used term because sepsis is only seen as a subcategory of SIRS. For sepsis, two of the mentioned SIRS signs, as well as an infection, need to be present.

The second stage, called severe sepsis, is diagnosed when acute organ dysfunction begins. Severe sepsis can also be diagnosed when sepsis is present along with hypotension (low blood pressure) or hypoperfusion (decreased blood flow through an organ).
Organ dysfunction is characterized by symptoms such as decreased urine output, sudden changes in mental state, decreased blood platelet count, difficulty breathing, abnormal heart pumping function and abdominal pain. Partly because of this, urine output is one of the factors measured in the SSC Sepsis 6 bundle immediately after diagnosis of sepsis to track progression.

Septic shock is the most severe stage of sepsis. It is defined as the presence of hypotension, induced by sepsis, despite fluid resuscitation. In addition, perfusion abnormalities such as elevated lactate levels. Septic shock has the highest chance of mortality, with estimates ranging from 30% to 50%.

What happens in the first stage of sepsis?

In addition to the three stages of sepsis, several phases are thought to exist within the first stage of sepsis. The late phase of sepsis is dominated by immune suppression, leading to the hypothesis that the immune system changes from hyper-inflammatory to hypo-inflammatory phases during sepsis.
One study found, using a clinical study, that sepsis has three phases. When monitoring mortality rates, three peaks and two dips occurred. From this, they devised the three phases. Phase one lasted up until day 5, phase two up until day 15 and phase three until the end of the study’s observational period, which was at day 150.
They found that these phases differed significantly in their mortality rates and positive blood culture results. Phase two and three had the majority of deaths, at 63%. Phase three also saw a renewal of positive blood cultures, which may indicate inability to overcome the infection or growth of secondary infections.

It is recommended to start treatment as early as possible once sepsis is detected to stop it from progressing. Studies have found that the severity of sepsis and its progression depends partly on the source of infection and type of infection.
In one study, the risk of progressing to severe sepsis or septic shock was highest for those with bacteremia, followed by peritonitis and pneumonia. This can also be broader. Gram-positive cocci and Gram-negative bacilli bacteria in the blood increased the possibility of advancing to severe sepsis or septic shock within the first month in the ICU.
The stage at which sepsis is diagnosed also influences survival chances, as those initially clinically diagnosed with septic shock have an increased chance of dying within 28 days. Progression to severe sepsis and/or septic shock during the first week also increases chances of mortality.