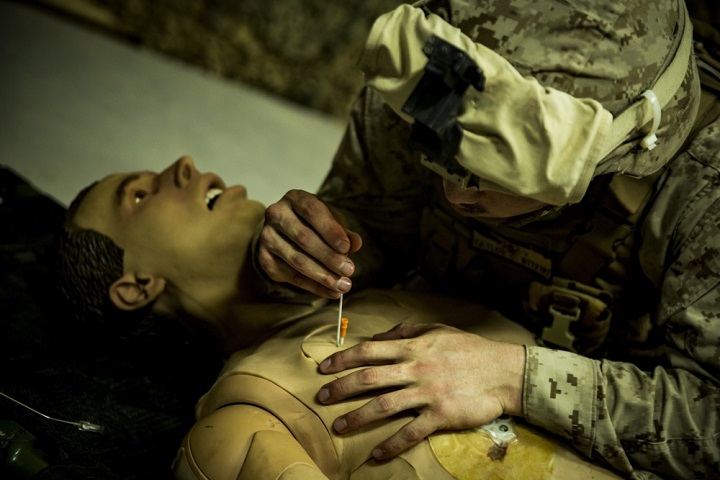 
SAN ANTONIO — The screams of the wounded and dying filled the stale room as medical workers rushed to check for pulses, resuscitate the unconscious and stop the bleeding. The darkness was pierced by red and green lights that illuminated pools of blood on the floor. Nervous hands scrambled to find the proper medical equipment amid the chaos of the combat environment that surrounded them, working frantically and disregarding their own safety.
Fortunately, none of this is real; it's a simulated casualty exercise, part of the training every future Navy hospital corpsman undergoes. The rate is actually the largest and most decorated in the Navy.
“We walk through the hallways and see the faces of all those who have given up their lives just to be part of that legacy,” said Seaman Patricia-Chase Sewell, corpsman “A” school student. “I can't imagine a greater honor, just the pride of being able to be here – and recognizing that this is something that thousands of people want to do but can't."
Sewell explained that she left college after two years of studying nursing to be part of something much bigger than a degree. It was more important for her to follow in the footsteps of past corpsmen.
“I couldn't imagine doing anything other than serving other people and helping other people,” said Sewell. “I can be in the military. I can wear the uniform and do something that I'm proud of and always will be proud of.” 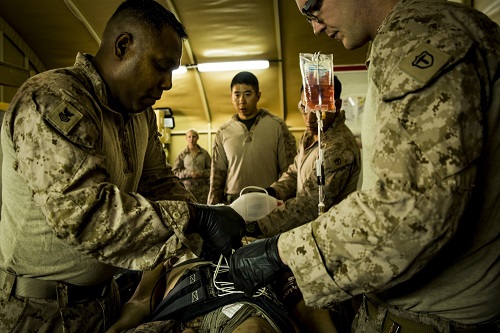 Navy Petty Officer 1st Class Cesar Borrero, left, an x-ray technician, and Seaman Andrew Ott, a field medical technician, fasten a pelvic stabilization device to an essential care simulator manikin during shock trauma section drills. (U.S. Marine Corps photo by Sgt. Justin Huffty)
Navy hospital corpsmen attend 14-week “A” school at the Medical Education and Training Campus in Joint Base San Antonio – Fort Sam Houston, Texas. In the last few years, the curriculum, which is developed by Navy Medicine Education, Training and Logistics Command, has been revamped to more closely align it with the needs of the modern, expeditionary Navy and Marine Corps.
Navy HM1 Joy Lewis, an “A” school instructor, said the biggest difference in the school has been the renewed sense of ownership by the Navy, Navy medicine and the Hospital Corps. She said the instructors have gotten better at molding the next generation of corpsmen as well.
“The changes here at hospital corpsman 'A' school have always been for better medicine and to better understand how to treat personnel on a ship or on the ground with forces in the Marine Corps,” agreed Navy HM2 Briana Bartholomew, an instructor. “So we've incorporated a lot of the modern-day medicine and techniques in order for us to have the best medicine.”
When she went through the school years ago, for example, the curriculum did not allow the students to practice the techniques they learned during lectures. Instead, corpsmen had to get hands-on experience on the job.
“We went from an environment where it was a lot of sitting down and listening to lectures, and we discussed things that they may do,” said Lewis. “We changed that toward about 60 percent practical, so they're sitting in labs every day. They learn how to use a tourniquet, treat a patient and stop bleeding instead of talking about something that they may do someday.”
“Now, they understand how a system works through lessons they learn, by lectures on how a medical procedure works, and why they clean or sterilize the way they do,” added Bartholomew. “Then they work on mannequins, practice looking for a pulse and utilize needles.”
Along with the medical training, Bartholomew tries to instill in her students the values of leadership, motivation and love for the Navy. She wants her students to understand why they do the things they do, and step up when needed.
“My favorite thing about being an instructor is that I'm entrusted to be a mentor and a role model for the students that are coming into the Navy for the first time,” said Bartholomew. “Being entrusted to be a role model here, I find that a lot of students look up to us a lot. I never got looked up to before, so I feel like their hero. I want to strive to make sure that they understand everything that's here.”
According to Bartholomew, the most challenging part is motivating Sailors, and teaching them that they will often be the sole providers of medical care for the men and women with whom they are stationed.
“They're entrusting their lives to us,” said Bartholomew. “They're putting their lives in our hands. And if we have their lives, we need to make sure we're putting in 110 percent in everything.” To reflect that, the school's structure has undergone a revamp as well. Navy HM1 James Gafford, a tactical combat casualty care (TCCC) instructor, previously taught “A” school for two years. He said instruction has evolved from teaching both Navy corpsmen and Air Force medics in a joint environment, to focusing on the needs of the individual services.
“We moved into blocks, and with those blocks, we were able to really take a look at what the fleet is looking for as far as the performance of the corpsmen we were pushing out to them,” he said. Additionally, the course used to be heavily focused on providing care in medical treatment facilities (MTF). Now, the school has an increased emphasis on field training. Gafford explained that TCCC is a five-day course that trains students to provide medical support during combat. It teaches trauma life support in the field, and covers casualty drags, hemorrhage control, chest needle decompression, CPR, splinting and pressure dressings on medical dummies.
Because corpsmen don't always have access to all the equipment available in an MTF, students in the course have to rely on the equipment they will be carrying on their backs.
“Up until right now, they're taught to think in a medical treatment facility type of way,” said Gafford. “Well, here, we have to change their way of thinking just a little bit from combat medicine to ground medicine.”
Bartholomew added that another improvement to the program is that students are being eased into their roles in the fleet by going to naval hospitals or clinics after graduation. They're able to work with patients under supervision as part of Hospital Corpsman Skills Basic course, a three-month class to ensure corpsmen understand everything.
“The quality that we actually get, the response that we get from the fleet coming back to us to let us know, 'Hey, they are doing a good job,' has been higher than we've ever seen before,” said Bartholomew. “It's nice to know and rewarding that we're producing a product that we actually want to have out in the fleet to protect, heal or to be a comfort when we need them the most.”
Disclaimer: Re-published content may have been edited for length and clarity. Read original post.

Reducing risks to patients’ information is a top priority for the DoD
Recommended Content:
Military Hospitals and Clinics | Research and Innovation

The C-5M upgrades allowed the proof of concept to work, but Airmen’s innovation is what made it happen
Recommended Content:
Health Readiness

Madigan's general surgery residents have passed the exam for board certification on their first attempt at a nation-topping rate of 97.6 percent
Recommended Content:
Access, Cost, Quality, and Safety | Military Hospitals and Clinics

Vaccination is the best defense against the flu

We were able to determine he had acute appendicitis
Recommended Content:
Health Readiness | Military Hospitals and Clinics

The realism of it creates that white-knuckle sensation and adrenalin for the Soldier
Recommended Content:
Health Readiness

This update summarizes the frequencies, incidence rates, and correlates of risk of cold injuries among members of both active and reserve components of the U.S. Armed Forces during the past 5 years.
Recommended Content:
Health Readiness | Armed Forces Health Surveillance Branch | Epidemiology and Analysis | Medical Surveillance Monthly Report | Public Health

The 920th RQW is ready to support the next era of human space flight
Recommended Content:
Health Readiness

DoD and FDA leaders signed a memorandum of understanding to foster and prioritize the development of critical medical products
Recommended Content:
Health Readiness