By Deborah Fields, B.Sc.Reviewed by Susha Cheriyedath, M.Sc.
Tungiasis is a skin condition that is caused by a parasitic flea called the Tungapenetrans, and several other related species. The flea is additionally known by other names such as the sand flea, chigoe, jigger, and pique to name just a few of the alternatives. 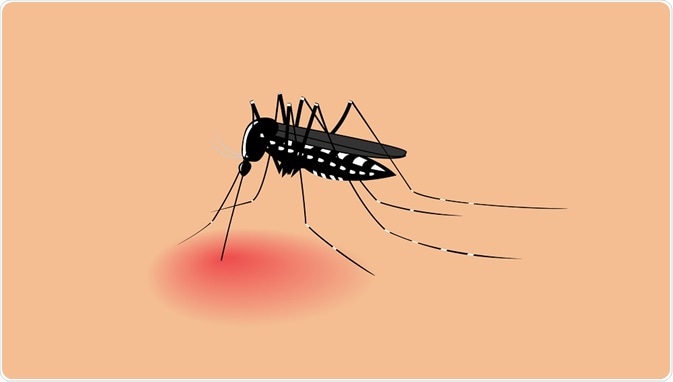 Suz7 | Shutterstock
The most common location for an outbreak of the condition is on the feet of the host as the flea is not able to jump very far from its original location. It can also develop under toenails, insoles of the feet and further afield on the body if these areas have been close to the ground. Tungiasis can cause white patches on the skin with a black dot at each of their centers. The patient may experience itching, irritation, and pain.
Occasionally patients can suffer from superinfections of the disease if a severe case is not identified and suited accordingly. There are also possible complications from other infections such as tetanus and Clostridium.

In which countries is tungiasis endemic?

The flea originates in the Caribbean, West Indies, and Central America region, but it has spread to other hot locations. Now it can be found in Africa, India, South America, and Pakistan. It is believed to have spread to Angola when sand was transported from Brazil in the late 19th Century. The spread of the flea through the world follows trading routes that were common during that period.
The disease tends to be most common in places where there is a lot of sand but it has also been known to exist in rainforest regions and banana plantations that have laterite soil. It is now commonly found in about 88 different countries worldwide. Some of the most recent locations have been Brazil, Madagascar, and Nigeria.
Scientists have studied the incidence of the condition in different locations. In 2012, in Tanzania, two villages were observed to find out how common the condition was there. About 586 people were included in the study who were aged five years or older. The researchers found that 249 people, about 42.5%, were diagnosed with tungiasis. In this particular case, people aged 45 and older had the highest incidence of the condition.
In Trinidad, the condition can be endemic in some places. It has reached a high level of about 54% infestation in males between the ages of 25 to 35 years of age. The peak for women is in those aged 55 years old or older.
The flea does not affect any race any more than another. However, natives to a particular region are usually more affected than visitors.

How do humans become infected?

The flea requires a warm-blooded host to feed on and reproduce. This means that alongside humans, it also bites other animals such as pigs, dogs, cats, and cattle and is a parasite to them as well. Both male and female fleas feed on the body but only the female creates the skin lesions.
The female flea burrows into the host’s epidermis to lay eggs. The flea’s head is deep down into the epidermis to feed on the human’s blood supply while the abdomen is at the outer layer of the skin creating a punctum or an ulceration.
The flea is also able to breathe through this exposed area. It is the abdominal area of the flea which develops into a sac where the eggs are then dropped. These will later fall out. Once the eggs have reached the outside of the body, they then continue through all of the stages of larval and pupal development. The female flea will stay in the skin and die.