Osteoclasts are specialized, multinucleated cells which play a vital role in bone development and regeneration. 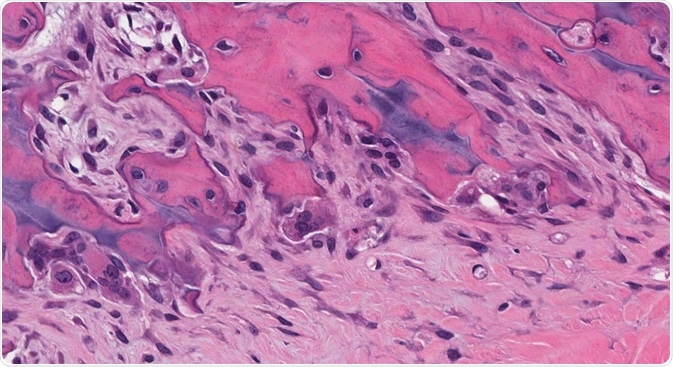 Credit: vetpathologist/Shutterstock.com
Bone is an important composite connective tissue which is remodeled continuously to repair damage, balance calcium levels in the body and maintain the integrity of the skeleton.
The synchronized response of the bone-forming cells (osteoblasts) and osteoclasts are responsible for the dynamic process of bone remodeling. Osteoclasts clear away the aged or damaged mineralized and calcified constituents of the bone matrix.

Osteoclasts originate from the hematopoietic stem cells (HSC) under the presence of macrophage colony stimulating factor (MCSF) and receptor activator of NF-κB ligand (RANKL). The HSC produces a common myeloid progenitor cell which further differentiates into granulocyte/macrophage progenitor (GMP) under the influence of granulocyte/macrophage colony stimulating factor (GM-CSF).
MCSF stimulates the differentiating GMP into cells of macrophage or monocyte lineage which are established osteoclast precursors. The pre-osteoclast cells differentiate to form mature osteoclasts in the presence of RANKL, a member of the tumor necrosis family (TNF).
Osteoclasts are found in various subtype and differ based on the matrix they are positioned, the time of day, and the type of remodeling they perform.

Osteoclasts consist of two distinct features; a ruffled border composed of convoluted membrane and a sealing zone which contains actin filament ring. The ruffled border develops by merging of secretory lysosomes with the plasma membrane. The actin ring surrounds the ruffled border and isolates the acidified microenvironment from the general extracellular space.

Osteoclasts break down both the organic and inorganic components of the bone. They do this by secreting acid and various proteolytic enzymes.
The bone resorption process starts with the polarization of osteoclast leading to the formation of the bone-apposed ruffled membrane. The sealing zone forms an isolated microenvironment, enclosed by the cell and the surface of the bone. The ruffled membrane secretes protons through a vacuolar-type ATPase which combine with chloride transported through chloride channel.
The hydrochloric acid secreted in the resorption compartment dissolves the inorganic components of the underlying bone. After demineralization, the organic component of bone is eaten up by the lysosomal secreted proteolytic enzyme, cathepsin K along with matrix metalloprotease (MMP).
The degraded organic and inorganic materials are removed from the resorption compartment through endocytosis by the ruffled membrane. Osteoclasts may detach and reinitiate the resorption cycle or undergo death after completion of resorption. To maintain the normal physiological balance of bone function, they couple with osteoblasts.
After the degradation phase, osteoclasts promote formation and differentiation of the bone-forming cells. The osteoblasts outline the eroded bone and secrete the organic component of bone which is further mineralized. Certain growth factors such as insulin-like growth factor-1 (IGF-1) and transforming growth factor- β (TGF-β) influence the coupling between osteoblasts and osteoclast.

During normal bone remodeling, bone resorption is firmly coupled to the bone formation to ensure maintenance of bone mass and quality. Loss of the balanced coupling process or dysregulation in osteoclasts function and differentiation results in several bone diseases.
The following conditions demonstrate the importance of normal osteoclast function in the body:
Reviewed by Kate Anderton, BSc