By Jonas Wilson, Ing. Med.
Fractures may occur easily in the mandible owing to its anatomical properties and this bone may account for as many as 70% of fractures occurring in the maxillofacial region. It is fairly prominent on the face and its support is not as strong when compared to other facial bones.  Mandibular fractures are common in young men for a variety of reasons with the most obvious being due to physical altercations. Factors that tend be positively correlated with these fractures include the use of alcohol, conducive environments and lower socioeconomic statuses.

The mandible is shaped like the letter U and the center of this bone is referred to as the symphysis. Horizontally, the body of the mandible contains the alveolar processes, which are responsible for bearing teeth. This horizontal portion of the bone continues distally, where an angle is formed between it and the vertical ramus of the mandible, which is home to the condylar and coronoid processes. These two processes are responsible for the articulation of the mandible with the temporal bone and the insertion site of the temporalis muscle, respectively. 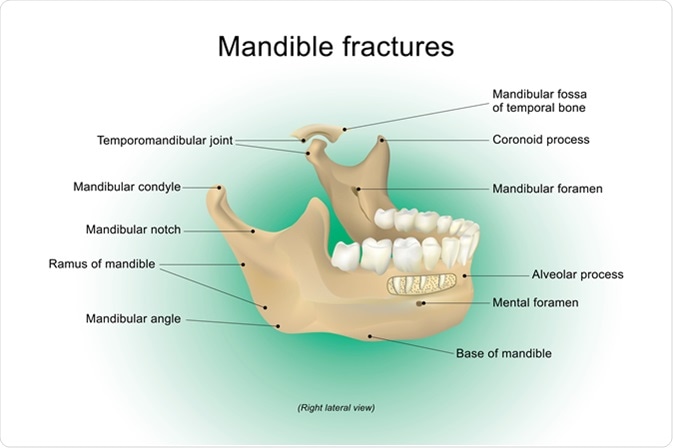 Mandibular fracture, also known as fracture of the jaw, is a break through the mandibular bone. It may result in a decreased ability to fully open the mouth. Image Credit: Studio BKK / Shutterstock

The cause of mandibular fractures may vary depending on where in the world they occur. For instance, studies have shown, that in some countries, such as Japan, Jordan, Denmark and Nigeria, motor vehicular accidents are the major causative factors to result in fractures of the mandible. In contrast, investigators in other countries, such as Sweden, Canada and Bulgaria, report assault as being the commonest etiology. In places like the United States, there seems to be an almost equal divide between mandibular fractures caused by motor vehicular accidents and assaults.
Overall, injury due to road traffic accidents accounts for most mandibular fractures in developing countries, whereas interpersonal violence is responsible for the majority of mandibular fractures in developed nations. Geography, seasonal variations in weather, culture, socioeconomic trends as well as legislation as it pertains to traffic on the roads, account for the differences seen between counties. Other less frequent causes of mandibular fractures include falling down onto the mandible, work-related mandibular injury, and accidents during sporting events, among other miscellaneous etiologies.
Some investigators have shown that fractures occur mostly, in decreasing frequency, in the mandibular body, condyle, angle and symphysis. Fractures of the mandibular ramus and the coronoid process are the least frequent of all mandibular fractures. The angle is the most susceptible region of the mandible to be fractured during interpersonal violence, whereas automobile and motorcycle accidents have a higher likelihood of fracturing the condyle and the symphysis, respectively. Moreover, research has shown that nearly a half of these patients may have other maxillofacial injuries on presentation.

Patients will chiefly present with pain and an inability to correctly align their teeth. The latter phenomenon is referred to as malocclusion as a result of trauma and this sensation is felt easily, because the teeth sense even the slightest change in alignment, which generates the sensation of something being wrong. Other signs and symptoms of a mandibular fracture include, obvious deformity, bruising, swelling, numbness due to inferior alveolar nerve compression, and trismus, which is an inability to fully open the mouth.

While surgery may not be immediately required in these patients, it is crucial to ensure that the airway is secured, because of the bone’s proximity to the upper respiratory tract and the potential for obstructive complications in an emergency setting. Diagnosis is then followed with the help of imaging. A panoramic radiograph is very useful in many cases, because it allows for visualization of the entire mandible. Following diagnosis, fractures may be classified based on location or the condition of the bone and surrounding tissues at the site of the fracture.
Conservative approaches may be used depending on the type of fracture and the extent of the injury. In contrast to a conservative approach, closed or open reduction may also be employed. Fixation may be achieved with splinting and intermaxillary rods, wires, screws and plates. Prognosis is favorable in cases where treatment is not delayed or complicated by other comorbidities, and there is no extensive damage to nervous tissues and other vital maxillofacial structures that may cause permanent deficits.
Reviewed by Afsaneh Khetrapal Bsc (Hons)