In part II of this series, we reveal how the ECM helps body cells move around, a process vital for wounds to heal and a fetus to grow. Here we introduce the extracellular matrix (ECM) and discuss how it makes our tissues stiff or squishy, solid or see-through.
When we think about how our bodies are made and what they do, we usually focus on organs, tissues and cells. These structures have well-known roles. But around, within and between them is a less understood material that also plays an essential part in making us what we are.
This gelatinous filler material is known as the extracellular matrix (ECM). Once thought to be the biological equivalent of bubble wrap, we now know that the ECM is a dynamic, physiologically active component of all our tissues. It guides cell shape, orientation and function.
The ECM is found in all of our body parts. In some tissues, it’s a thin layer separating cells, like mortar between bricks. In other tissues, it’s the major constituent.
The ECM is most prevalent in connective tissue, the material that forms our skeletons, cushions our internal organs and winds between blood vessels and around nerves. In connective tissue, the ECM is more abundant than the cells suspended within it.

The extracellular matrix meets the needs of each body part. In teeth and bones, it’s rock-hard. In corneas, it’s a transparent gel that acts like a camera lens. In tendons, it forms strong fibers that bind muscle to bone. Credit: Stock image.
What makes the ECM truly unique is its variability: Its texture, composition and functions vary by body part. That’s because the ECM’s deceptively simple recipe of water, fibrous proteins and carbohydrates has virtually endless variations.
In general, the fibrous proteins give the ECM its texture and help cells adhere properly. Carbohydrates in the ECM absorb water and swell to form a gel that acts as an excellent shock absorber.
Here we present a gallery of images featuring the ECM, courtesy of Thomas Deerinck and Mark Ellisman of the National Center for Microscopy and Imaging Research at the University of California, San Diego. 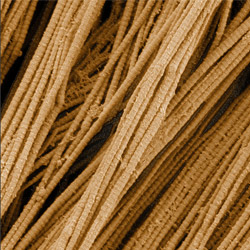 This image shows collagen, a fibrous protein that’s the main component of the ECM. Collagen is a strong, rope-like molecule that forms stretch-resistant fibers. The most abundant protein in our bodies, collagen accounts for about a quarter of our total protein mass. Among its many functions is giving strength to our tendons, ligaments and bones and providing scaffolding for skin wounds to heal. There are about 20 different types of collagen in our bodies, each adapted to the needs of specific tissues. 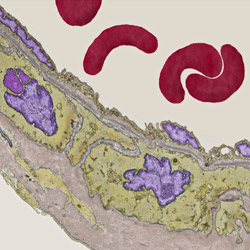 Elastin, another fibrous protein in the ECM, is abundant in artery walls. As its name indicates, elastin confers elasticity. Fibers made of elastin are at least five times stretchier than rubber bands of the same size. Tissues that expand, such as blood vessels and lungs, need to be both strong and elastic, so they contain both collagen and elastin. In this photo, the elastin-rich ECM is colored grayish brown and is most visible at the bottom of the photo. The curved red structures near the top of the image are red blood cells. 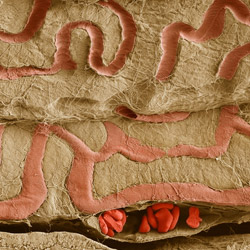 This image shows the ECM on the surface of a soleus (lower calf) muscle in light brown and blood vessels in pink. Near the bottom of the photo, a vessel is opened up to reveal red blood cells. Scientists know less about the ECM in muscle than in other tissues, but studies are making it increasingly clear that the ECM is critical to muscle function, and disruption of the ECM has been associated with many muscle disorders. Scientists have also found that the ECM in muscles can store and release growth factors, suggesting that it might play a key role in cellular communication. 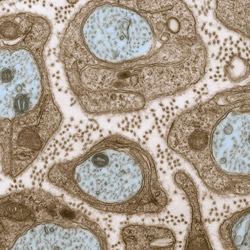 Although there is less ECM in nervous tissue than in connective tissue, it is found between the stems (axons) of nerve cells. In this image, brown-colored Schwann cells act like insulation around the blue-colored nerve axons. The somewhat colorless areas between the Schwann cells are ECM. The tiny brown spots within the ECM are collagen fibers. A broader view of this image also includes two large, reddish brown nuclei. This high-magnification photo of a kidney shows another role of the ECM. It can form a thin, flexible mat, known as a basal lamina, between connective tissue and other tissues. In the kidney, an unusually thick basal lamina acts as a filter that controls which molecules are allowed to pass from the bloodstream into urine. Red marks the main protein in basal lamina, known as laminin; purple marks DNA; and green marks the structural protein known as actin.
Publicado por salud equitativa en 14:25