A new study conducted by researchers at Imperial College London and published today in The BMJ suggested that regular monitoring (“active surveillance”) rather than instant treatment can be effective for moderate cervical lesions–unusual cells on the surface of the cervix, commonly known as cervical intra-epithelial neoplasia grade 2 or CIN2. 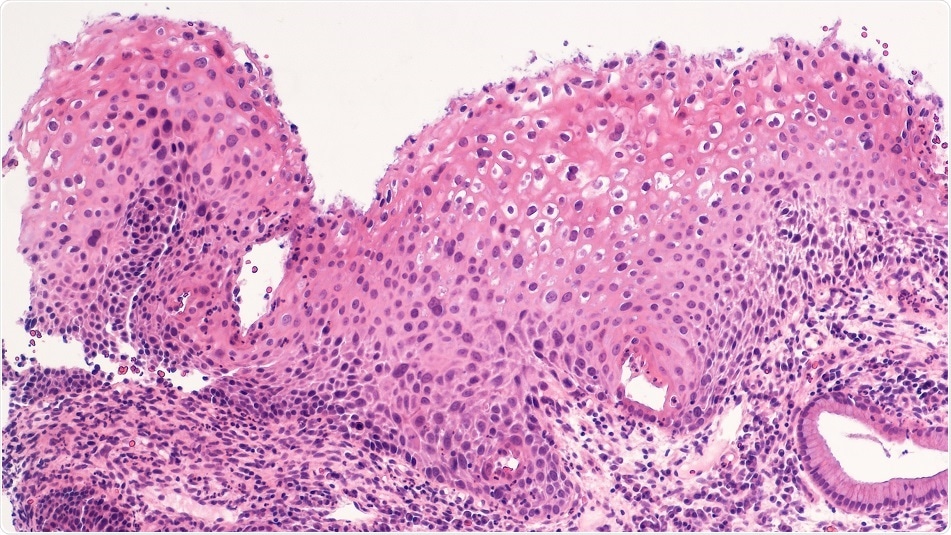 Credit: David Litman/ Shutterstock.com
The study findings should help women make informed decisions along with their physician, but the limitations show that study outcomes should be treated with caution.
CIN is categorized into grades 1, 2 or 3 based on how severe the premalignant conditions are, but CIN is not cervical cancer. It is possible for CIN to lead to cancer but it may also remain unaltered or even return to its normal state.
Currently, a diagnosis of CIN2 is the cut-off point for treatment. However, some studies have recommended that CIN2 lesions often return to their former state without treatment and instead it should be regularly monitored, particularly in younger women, as the treatment would be harmful for pregnancies in future.
The researchers estimated the rates of persistence, progression, and regression of untreated CIN2 lesions in addition to the compliance with regular monitoring.
The study results were analyzed from 36 studies including 3,160 women with a diagnosis of CIN2 confirmed by a laboratory, who were under active surveillance for a minimum period of 3 months.
Differences in study quality and design were considered, and rates of persistence, progression, and regression were measured at 3, 6, 12, 24, 36, and 60 months.
After 2 years, only 18% (one in five) of the lesions progressed to CIN3 or worse, 32% (one third) persisted, and 50% (half) had returned to normal state spontaneously (regression). In women who are below 30, the rate of regression was 60%, persistence was 23%, and progression was 11%.
Based on the above estimates, the scientists describe that in 1000 women aged below 30 with an analysis of CIN2, 600 will undergo regression, 230 will undergo regression, and 110 will progress in a period of 2 years of regular monitoring.

There were only 15 cases of cancer (0.5%) reported in women aged above 30. Compliance with surveillance was higher (90%) over 2 years and identical patterns appeared after further analyses to evaluate the strength of the outcomes.
However, the scientists suggest few disadvantages, such as significant differences between studies and potential misclassification of lesions. Although they were able to explain some of these limitations, they cannot completely ignore the possibility that they may have controlled the results. Thus, the findings should be interpreted with caution.

“Most CIN2 lesions, particularly in women aged less than 30, regress spontaneously. Active surveillance, rather than immediate intervention, is therefore justified, especially among young women who are likely to adhere to monitoring.”
Study authors

Prof. Maggie Cruickshank at the University of Aberdeen questioned how this review will be useful for women who are trying to determine which management option is the best after the diagnosis of CIN2.
It is known that the rate of regression is about 50–60%, and that active surveillance is simply postponing treatment and there is even a small risk of cancer (0.5%), which may be objectionable to some, she added. Other important considerations include the inconvenience of regular clinic visits, the possibility of pregnancy complications, and the effects of treatment.
Prof. Maggie commented: “Knowledge of the rates of regression from CIN2 are reassuring, but they must be presented in a meaningful way alongside clear information about the effects of both surveillance and treatment, so women can make fully informed choices.”
Source:
https://eurekalert.org/pub_releases/2018-02/b-rmr022318.php
Publicado por salud equitativa en 9:43