By Catherine Shaffer, M.Sc.
Rous sarcoma virus (RSV) was discovered by Peyton Rous, who published his findings in the Journal of Experimental Medicine, 1911. 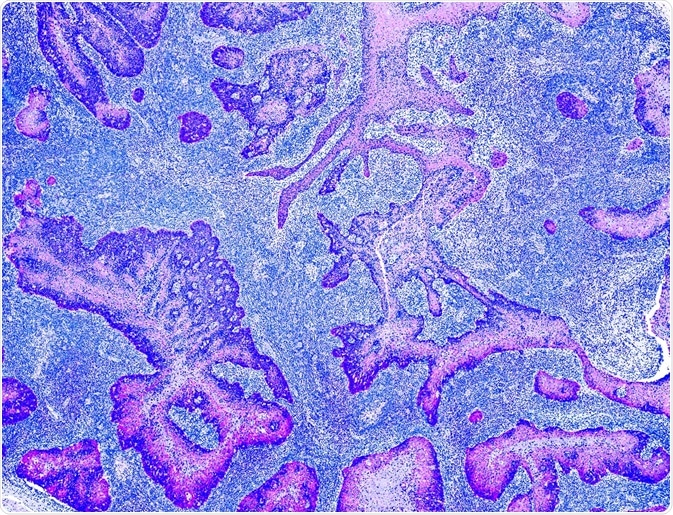 Credit: Carl Dupont/Shutterstock.com
Rous ground tumor cells from a chicken with sarcoma, and filtered it so that only small particles remained. These were neither chicken cells or bacteria, but were able to stimulate the development of a sarcoma in other wild fowl. This was the first demonstration that a malignant tumor could be caused by an infection.
Subsequently, many other tumors induced by viruses have been discovered in other animals, and the first oncogenic human virus, Epstein-Barr virus, was identified in 1964. Rous’ work on RSV was also a technical innovation in studying the molecular mechanisms of cancer.

Peyton Rous did his research on RSV at the Rockefeller Institute. While working in a laboratory for cancer research, he received a young hen with a tumor in its right breast that had been present for about two months. The tumor was found to have widespread necrosis in its center, with translucent, finely striated tissue at the rim.
Peyton implanted small bits of the tissue in the left breast of the same hen and in its peritoneal cavity. He also implanted the tumor tissue into two young hens from the same flock. The original tumor was a sarcoma, and the necrosis was caused by a lack of blood supply and hemorrhage of the thin-walled blood vessels. The original hen subsequently died due to growths from the transplanted tissue in its peritoneum.
Another hen developed similar tumors. Further transplantation experiments were carried out, resulting in some further growths from the tumors. All of the birds that developed tumors were from the same bloodline.
After six serial transmissions, the tumors became fast growing and highly malignant. Rous collected supernatant fluid from centrifuged samples of the tumors, and filtered the fluid to remove bacteria. The fluid was injected into the breast of one chicken. The chicken developed sarcoma at the site of injection.

RSV is now known to be a class VI enveloped virus with a positive sense RNA genome. The RSV genome consists of four genes:
RSV enters the cell through receptor-mediated endocytosis. It binds a receptor on the cell surface and is taken into the cell. Inside the cell, RNA is reverse transcribed into DNA, which is then transcribed into viral proteins through the host cell machinery.
The v-src gene in RSV is structurally closely related to the src gene. The oncogenic src gene encodes a receptor tyrosine kinase. It phosphorylates tyrosine residues of other proteins. It was discovered by J. Michael Bishop and Harold E. Varmus who received a Nobel Prize for their work in 1989.
The normal activity of src is as a signaling molecule promoting survival, angiogenesis, proliferation, and invasion pathways in cells. Overactivation of src, however, such as by mutation, can lead to increased activity of src, which can cause overgrowth and malignancy of cells.
Reviewed by Afsaneh Khetrapal Bsc (Hons)