How common is pancreatic cancer worldwide? Why do you think that new treatments need to be developed?

The cancer we are working on is called pancreatic ductal adenocarcinoma (PDAC), a very aggressive cancer of the pancreas. 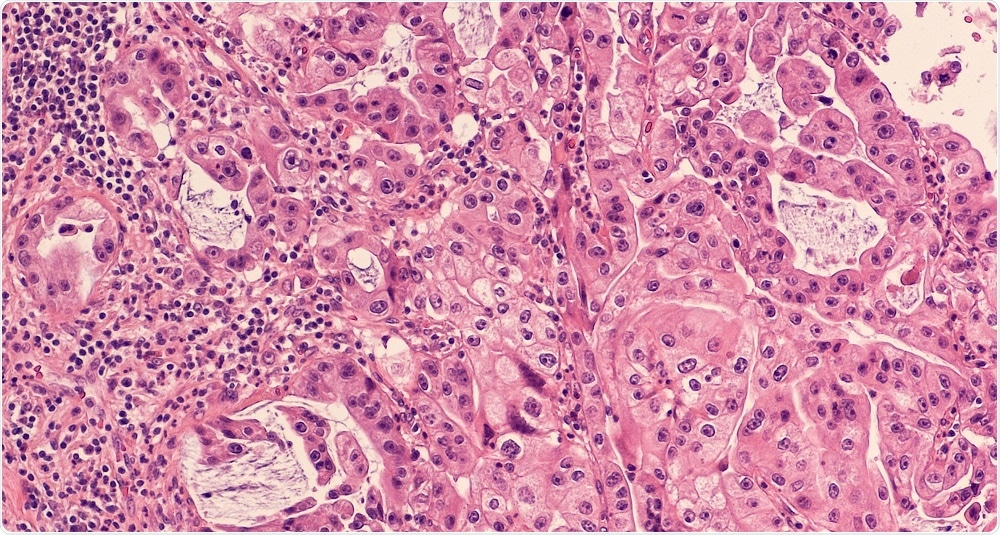 H&E Staining of a Pancreatic Adenocarcinoma Sample. Credit: David Litman/Shutterstock.com
Luckily, it is not a very common cancer, but there are hundreds of thousands of cases a year in the U.K. and the U.S., but it is not as common as prostate, lung and breast cancer. Sadly, it has the highest mortality rate of all cancers, with a five-year survival rate of less than 5%, and that hasn't changed for the last 40 years.
One of the reasons for this is that pancreatic cancer is often discovered late. This is due to a lack of characteristic symptoms, which are easily missed by the general practitioner. These include diffused stomach pain and diffused back pain, which can have many other causes. By the time the patient is sent to the hospital for an MRI or a CT scan, the cancer has typically metastasized to other areas of the body.
The current standard of care is chemotherapy. Unfortunately, most patients will develop resistance to treatment within a few months. On average, patients who are diagnosed late survive six months, or a year, if they’re lucky. Even when the patient has been given a combination of chemotherapies and targeted therapies, the best outcome is prolonging life expectancy by one month.
On the other hand, if the cancer is discovered early, before symptoms are developed, one can have surgery, with greater chances of success. These patients often live up to 10 years longer. But eventually, the cancer is likely to spread and develop several micro-metastases.
This is why it is very important to develop new therapies with different mechanisms that overcome the resistance to chemotherapy. Viruses may represent one alternative, as they can target cancer cells specifically, and in a completely unique way than the current chemotherapeutic drugs and targeted therapies do.

During the last 15 years, oncolytic viruses have become a really hot topic in research. There are many viruses, one of which, adenovirus, can be specifically targeted to cancer cells. Adenovirus is a small, DNA-based virus that produces flu-like symptoms. Most of us have been infected with some kind of adenovirus during our lifetime; symptoms typically last for three to five days and include headache, fever, stomach ache and cold symptoms.
The advantages with adenovirus are their small genome size and that all functions are known, which makes them easy to modify. We, and many other researchers in the world, have managed to genetically engineer the virus so that it will only replicate and propagate in cancer cells. The process is relatively easy; you can delete some genes in the virus preventing it from propagating in normal cells which would otherwise cause it to amplify its genome and kill healthy cells.
Adenovirus is a very good virus to use because it targets all epithelial cells, meaning it can target most adenocarcinomas including pancreatic cancer, prostate cancer, breast cancer, and has even been evaluated clinically in glioma patients.
To date, over 5,000 people have been injected with various forms of adenovirus with no serious side effects, so safety is very well documented. One of the first oncolytic adenoviruses was approved by the Chinese FDA in 2005 for liver, head and neck cancer. While there is currently no adenovirus approved for therapy in the western world, there are many Phase I, II and even Phase III clinical trials with various types of adenoviruses.

Many years ago, we had a student who developed an adenovirus that was not cancer specific but modified to express alpha-V/beta-6 integrin ligands for targeting to this integrin. Importantly, she showed that this virus did not bind to erythrocytes or other blood-factors, and was unlikely to be eliminated by the liver; a major drawback to developing injectable viral treatments for elimination of metastatic sites in patients.
Read the research paper by Dr Gunnel Halldén and her colleagues in Molecular Cancer Therapeutics
Building on these findings, we developed another adenovirus that would only replicate in cancer cells using recombination engineering, in partnership with our collaborator, Dr. Alan Parker, at Cardiff University. We combined the genome of a virus that only replicated in cancer cells with the alpha-V/beta-6 targeting virus.
This resulted in a virus which specifically targets and infects pancreatic cancer cells. It's basically a double safety mechanism; it cannot replicate in nor infect normal cells.
Alan’s team constructed this virus in a few months, and we amplified it and produced it in high quantities. We then conducted experimental studies with the virus in 15 different pancreatic cell lines, and found that the virus was highly effective. It infected and killed all the cell lines to different degrees. The more alpha-V/beta-6 that was expressed, the more cell killing occurred.
We then wanted to know more about the mechanism behind the killing. We found that the virus replicated properly and amplified itself in the cancer cells but not in normal cells. We then carried out animal studies, and found that the virus was highly efficacious at killing human pancreatic cancer cells in mice, eliminating the tumors within four to eight weeks. We could also administer the virus systemically, and proved that the virus reached the tumors after systemic delivery.
Due to the species-specific nature of each adenovirus, we needed to devise a new system to test its efficacy in humans. We developed a three-dimensional culture system, which involved growing human pancreatic cancer cells together with stromal cells to mimic the tumor microenvironment in patients.
In pancreatic cancer, stellate cells in the stroma usually present a big obstacle for drugs entering the pancreas to reach the cancer cells. Using our three-dimensional culture models, we showed that the virus can actually penetrate the stroma, eliminating some of the stellate cells to reach the cancer cells. We were then pretty convinced that the virus is a good alternative and something to pursue for future clinical trials. 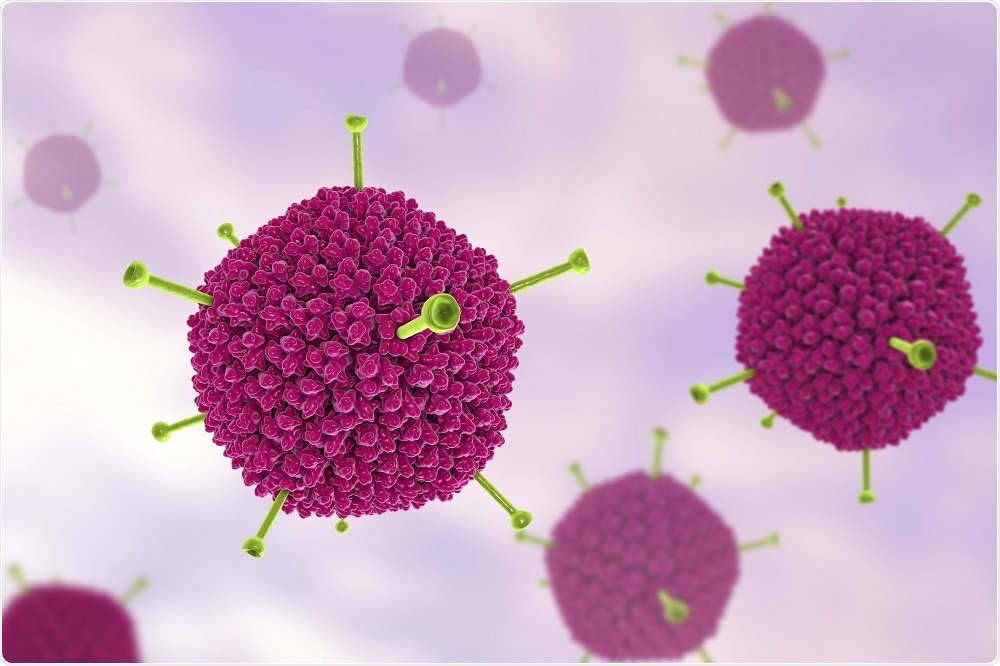 Why are modified oncolytic adenoviruses such an advancement in the field of pancreatic cancer research? Are there any limitations?

The main advantage of oncolytic adenoviruses is that the virus can infect and kill all pancreatic cancer cells, even those that are resistant to current drugs. It can also sensitize these cancer cells so that a lower dose of chemotherapy is required, and they act synergistically with the drugs to kill cancer cell.
In terms of limitations, we haven't come across cells than can mutate quickly enough to become resistant to the virus before it kills them. Within 24 hours of infection, the virus starts to reproduce itself and amplify its genome, and within 48 hours, you have massive cell lysis in the tumor, so we don’t think that this will be a problem.
One obstacle might be the binding of the virus to blood factors. The virus doesn’t infect blood cells, but previous studies have been halted due to the rapid elimination of blood factor-bound virus by the liver. However, our studies suggest we have attenuated the liver uptake and elimination.
Another obstacle is neutralizing antibodies which inactivate the virus. But it has been proven, even in clinical trials with other adenoviruses, that the first injection is usually very potent. To overcome limitations in subsequent injections you can encapsulate the virus with different agents, such as polyethylene glycol, to try and avoid neutralizing antibodies, for example.

What options could this approach provide to patients who are diagnosed with pancreatic cancer?

We think that it would be of great benefit to patients with virtually no other therapeutic options. These would be the late-stage pancreatic cancer patients. The first clinical trials would aim to determine safety and efficacy or at least tumor distribution. It would be delivered together with the current first-line chemotherapy drug, in order to enhance the effect.
But before we get there, you would have to spend one to two million pounds to do additional safety testing in other animal species. Good manufacturing practices would then be required to produce the virus at a clinical grade. This would probably delay clinical trials by another year or so.

In the future, do you think that modified oncolytic adenoviruses will be routinely used to treat pancreatic cancer? Could this approach be applied to any other cancers?

Unfortunately, I don't think modified adenoviruses will be routinely applied, simply because the cost to produce the virus to clinical standards is very expensive. This is typical of new biological therapies, where the process must be very thorough to ensure safety.
Using adenoviruses to treat pancreatic cancer is just one of our projects. We have now tested this virus in breast cancer, including triple negative breast cancer cells, for which there is no therapy available. It turns out that these cancer cells also have high levels of alpha-V/beta-6, so we hope to pursue this treatment for late-stage metastatic triple negative breast cancers as well. Prostate cancer doesn't have alpha-V/beta-6, but they have other proteins that can be targeted, so we're working on that.

What does the future hold for research into pancreatic cancer?

Most research is currently focusing on detecting pancreatic cancer early, to increase the chance of curing the disease. My colleagues here at the center are working on biomarkers, as are other researchers in the world. They have recently developed a panel of micro RNAs and proteins that can be monitored in urine or blood to detect pancreatic cancer early.
We also have another project where we label the adenovirus with radioactivity, which could be used to track micro metastases in patients or even the primary cancer cells to see if it would be taken up in the cancer cells. This would enable early detection.
Immunogenic effects are a big thing for the future as well. All these viruses, especially adenoviruses, induce anti-tumor immune responses. We are hoping that will also be the case in humans with pancreatic cancer, since pancreatic cancer is notorious for avoiding the host immune response. 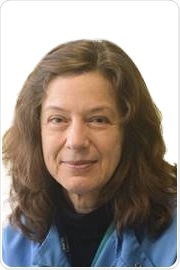 Dr Gunnel Halldén is a Reader in Cancer Gene Therapy at Barts Cancer Institute (QMUL). Her major area of research is to develop highly tumour-selective adenoviral mutants and to dissect the molecular signalling pathways that cause enhanced cell killing in cancer cells in combination with current chemotherapeutic and/or targeted drugs.
She did her BSc in Biochemistry, Organic Chemistry and Physiology at Stockholm University (Sweden), followed by PhD studies and postdoctoral research at the University of California at Berkeley.
She continued her research focusing on oncolytic adenoviruses at Onyx Pharmaceuticals (USA) before transferring to Imperial College, London (UK) in 2002 to develop novel viral mutants. The overall goal of Dr Hallden’s team is to develop improved therapies for late stage, currently treatment-resistant cancers including late stage prostate and pancreatic cancers.
Publicado por salud equitativa en 7:13