Editor at BugBitten
Vera Unwin gained her Bsc (Hons) in Biomedical sciences (University of Dundee), before completing her MSc in Medical Parasitology (LSHTM) and gaining exciting field experience working in the Amazon, Brazil. After working in the malaria vaccine group at the Jenner Institute (University of Oxford), she moved to the Liverpool School of Tropical Medicine to work on filarial nematode cell lines and then Mycobacterium tuberculosis risk factors. She is currently doing a PhD at the LSTM developing and evaluating diagnostics for malaria elimination settings 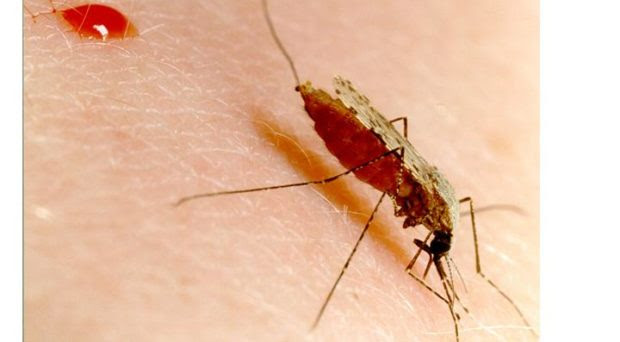 An anopheles mosquito completing a bloodmeal. Credit Hilary Hurd
Malarial parasites are almost exclusively transmitted to humans through a bite from an infected Anopheline mosquito. Other mosquito species are malaria-refractory; they are unable to sustain an infection due to innate immune responses. These defensive mechanisms include melanisation– the deposition of melanin on the cell surface- and the direct lysis of the parasite. Refraction in mosquitoes has been studied for years in the hope that their immune system could be modified to be resistant to malaria.
CRISPR/Cas9
The potential to exploit mosquito immunity has only recently been realised following advances in gene editing technology. The development of the CRISPR/Cas9 system allows both highly specific gene modification and broader chromosomal changes. This (originally bacterial) anti-viral mechanism is best known for its current exploration in therapeutics, specifically for diseases arising from gene abnormality e.g cancers. Within the scientific community CRISPR/Cas9 is readily repurposed for a vast array of studies, from gene-function studies to the replication of human disease models (summarised well here).
These gene editing tools have most recently been used to create malaria-refractory Anopheles gambiae mosquitoes- the principle vectors of malaria. This month, Yuemie Dong and colleagues published their studies on the effects of the inactivation of the fibrinogen-related protein 1 (FREP1) gene on susceptibility to Plasmodium parasites and mosquito fitness.

Although not fully understood, FREP1 is a mosquito host-factor known to facilitate parasite traversal of the mosquito midgut, aiding transmission. Last year the highly conserved fibrinogen-like domain (FBG) of FREP1 was investigated as a target for transmission-blocking vaccines, with encouraging results. The transmission blocking mechanism of FBG was elucidated via interactions with both gametocyte and ookinete stages within the mosquito midgut. Using anti-FREP1 antibodies, transmission of P. berghei and P. vivaxparasites was significantly reduced during standard membrane-feeding assays. This was supported by murine studies where immunization with FBG achieved >75% blocking efficacy, and anti-FBG serum reduced >81% of P. falciparum infection to A. gambiae.
FREP1 silencing in A.gambiae
Building on this, Dong et al use CRISPR/Cas9 to create FREP1 knockout A.gambiae lines. In brief, they crossed two transgenic mosquito lines to generate germline gene-knockouts: 1) a Cas9-expressing line under a VASA2 promoter and 2) a transgenic line expressing FREP1-targeting guided-RNAs (gRNA) under a U6 polymerase III promoter. The progeny of the latter showed stable blue fluorescence in the larvae or adult eyes (via a 3XP3-TFP reporter gene), which was used to identify mutants for further studies. The resulting FREP1 knockouts showed significantly reduced susceptibility to P.falciparum and P.bergheiinfections in comparison to 3 control mosquito lines: WT, Cas9-expressing and FREP1-gRNA lines. Furthermore, this marked reduction was observed in both oocyst and sporozoite stages.
‘Gene drive’ mechanisms using Driving Endonuclease Genes (DEGs) can be utilised to spread genes throughout a mosquito population that would otherwise follow mendelian population genetics. In this way, the FREP1 knockout genotype could be distributed amongst mosquito populations and act as an additional vector control tool for malaria. However, these mechanisms heavily depend on the fitness cost of the gene of interest.
Fitness cost benefits
Unfortunately, FREP1 knockouts in this study suffered significant fitness costs. These included significantly reduced propensity to blood-feed, longevity after blood meal, fecundity, and egg hatching rates. Since FREP1 is thought to have a role in blood feeding and digestion, its disruption may affect nutritional uptake or impair defences in the mosquito midgut leading to the observed fitness costs. The authors also note that CRISPR/Cas9 mediated gene editing is known for creating unwanted changes at non-target sites and although accounting for this in their gRNA design, it is still possible that this could have contributed to the reduced fitness. Since there was no observed impact on the adult mosquito size or life-span of mosquitoes, they suggest overcoming the fitness costs by inducing stage- and tissue-specific gene deletions in the midgut or salivary glands of adult mosquitoes.