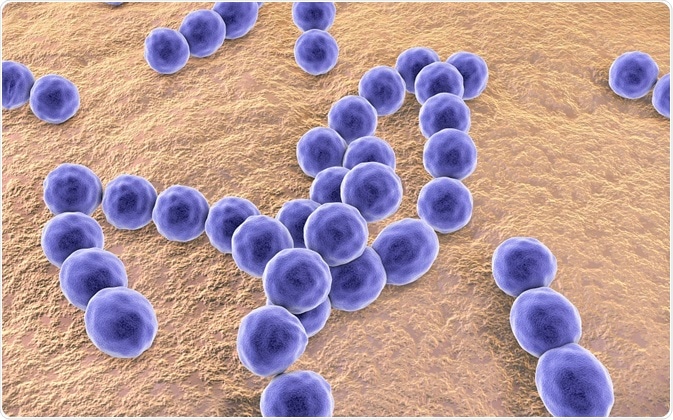 Credit: Katryna Kon/Shutterstock.com
Gram staining was developed in the 1800s as a quick and simple procedure to  distinguish between Gram positive and Gram negative bacteria. It is one of the first laboratory techniques taught to students of microbiology and helps classify microorganisms based on structural differences of their  cell walls.
MRSA is an important example of Gram positive bacteria, characterized by its resistance to widely used antibiotics. 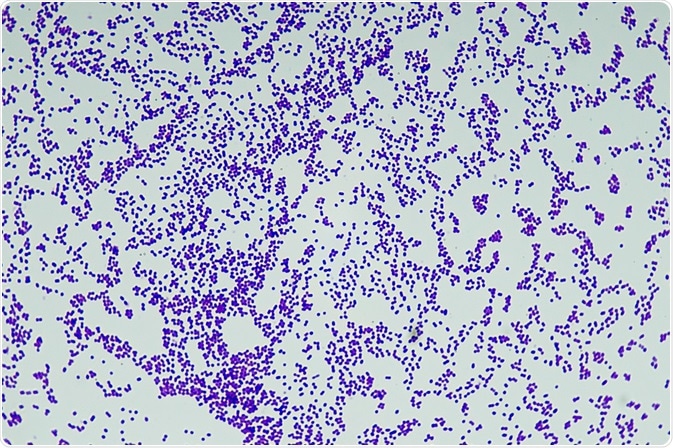 Gram positive bacteria are more susceptible to treatment with antibiotics than Gram negative bacteria because they lack an outer membrane, nonetheless certain bacterial strains display antimicrobial resistance. Methicillin-resistant Staphylococcus aureus or MRSA is a common Gram positive pathogen that is resistant to all β-lactam antimicrobials including penicillin.
Many β-lactam antimicrobials are given as first line therapy for staphylococcal infection because of their superior efficacy. Resistance to these drugs means that second line agents are required, which  complicate treatment regimens and negatively impact patient outcomes.
The effect of antibiotics on Gram positive bacteria is reduced because of antimicrobial resistance mechanisms such as β-lactamase production and modifications to the target site of the antibiotic. The genetic determinants of antibiotic resistance are transmitted between bacteria through both vertical and horizontal transfer, with several genes capable of being inserted in an integron leading to the resistance of multiple antimicrobials.
Therapeutic strategies for the treatment of MRSA and other antimicrobial resistant bacteria include higher antibiotic dosage, combination treatment with non-conventional drugs and the development of new drugs.
Reviewed by Gillian D’Souza, MSc