By Shelley Farrar Stoakes, MSc, BSc
BRCA1 and BRCA2 genes encode for proteins that have important roles in DNA repair and act as tumor suppressors. Though there are differences in the sequence and structure of the proteins produced by BRCA1 and BRCA2, they have similar biological functions. 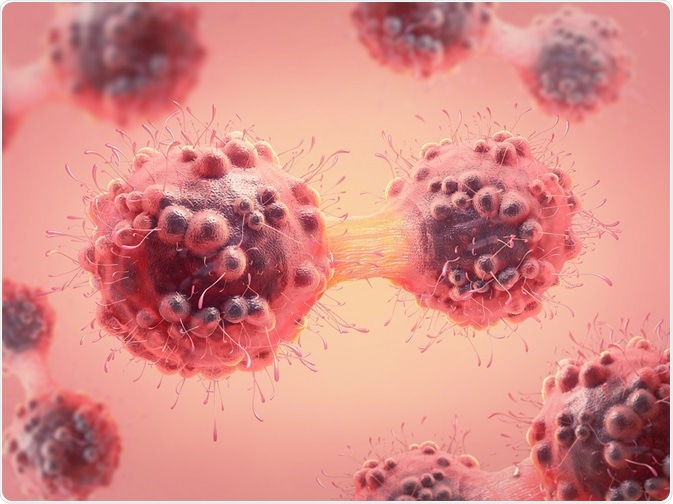 Credit: Christoph Burgstedt/Shutterstock.com
Both BRCA gene products are reported to interact with the RAD51 protein, which is essential for DNA repair through homologous recombination. Mutations to the BRCA genes are associated with an increased risk of breast and ovarian cancers. The production of defective BRCA gene products has been found to inhibit their functional abilities as tumor suppressors leading to an increased risk of malignancy.

The proteins encoded by BRCA genes bind with RAD51, a gene product which aids in the repair of damaged DNA. Homologous recombination is a mechanism for repairing damage to double-stranded DNA to maintain genomic integrity. The mechanism repairs the damaged DNA by exchanging nucleotide sequences utilizing a sister chromatid.
RAD51 is a key component to the homologous recombination mechanism because it promotes homologous pairing and strand exchange. Gene products of BRCA2 directly mediate the recruitment of recombinase RAD51 to double-stranded breaks during homologous recombination. The structure of the BRCA2 protein contains a DNA binding domain that can interact with both single-stranded and double-stranded DNA, along with repeat sequences in the protein for RAD51 binding.
Point mutations in the BCR repeat sequence can compromise the interaction with RAD51. BRCA2 may also help regulate cytokinesis during the physical separation of cell division. A study found that BRCA2 gene products localizes at  the central spindle and midbody during cell division, with the absence of BRCA2 function leading to a failure of cytokinesis.

Though proteins encoded by BRCA1 and BRCA2 work via a common pathway of genomic protection and repair, their roles occur at different stages of the DNA repair mechanism.
The BRCA1 protein has a versatile role in DNA repair through its interaction with tumor suppressors, DNA repair proteins and cell cycle regulators. Therefore, the BRCA1 protein has a more diverse role in multiple DNA repair pathways, including homologous recombination, non-homologous end joining, single strand annealing and checkpoint regulation.
A 2017 study found that a tumor suppressor complex is also formed between BRCA1 and BARD1, a protein associated with BRCA1 and encoded by the BARD1 gene. This enables DNA repair through homologous recombination.
The interaction is an important mechanism for promoting the assembly of the synaptic complex, thereby enhancing RAD51-mediated DNA joint formation during homologous recombination. Defective proteins in the complex weaken the RAD51 interaction and compromise the DNA repair mechanism.

The protein products formed from defective BRCA1 and BRCA2 genes do not function as required by the body. This means that their role in repairing damaged DNA is inhibited leading to an increased risk of cancer.
Mutations to the BRCA genes can be inherited from the mother or father, with a 50% chance of a child inheriting the mutation from a parent with the defective gene variation. BRCA1 and BRCA2 are associated with hereditary breast and ovarian cancer but can also cause an increased risk of prostate and pancreatic cancer.
The risk of malignancy differs depending on whether the mutation involves BRCA1 or BRCA2. For example, the risk of breast cancer in an individual with a BRCA1 mutation is between 46% and 87% whilst the risk from a BRCA2 mutation is between 38% and 84%. Molecular genetic testing is used to identify pathogenic variants of the genes, providing patients with the option of preemptive surgery.
Reviewed by Liji Thomas, MD.