About 10 years ago, University of Utah geneticist Mark Yandell developed a software platform called VAAST (Variant Annotation, Analysis & Search Tool) to identify rare genes. VAAST, which was funded by NHGRI, was instrumental in pinpointing the genetic cause of a mystery disease that killed four boys across two generations in an Ogden, UT family.
NIGMS has been supporting Yandell’s creation of the next generation of his software, called VAAST 2, for the past few years. The new version incorporates models of how genetic sequences are conserved among different species to improve accuracy with which benign genetic sequences can be differentiated from disease-causing variations. These improvements can help identify novel disease-causing genes responsible for both rare and common diseases.
Yandell and his colleagues in the Utah Genome Project recently took part in a panel at the Sundance Film Festival called the “Genetics of Storytelling” to discuss film’s ability to convey the power of science and medicine. Yandell told the audience his story about his efforts to use VAAST to trace the Ogden boys’ genetic variation back to their great-great-great-great-great grandmother.
Below is a blog post published on January 30 by University of Utah science writer Julie Kiefer about the event.
Finding the Story Within: Utah Genome Project at the 2018 Sundance Film Festival 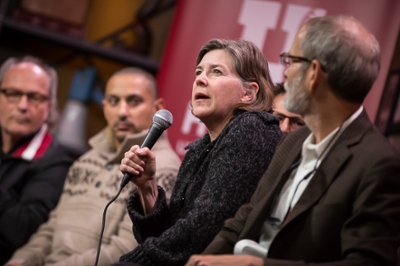 When Helen’s two sons died before they were a year old, she thought she had terrible luck. But when her grandsons died as babies, she knew that something was horribly wrong. In 2011, University of Utah geneticists uncovered the reason for the boys’ deaths. They all had a genetic mutation that caused a serious condition, now known as Ogden syndrome

, named after the Utah town where they lived.
Knowledge is nothing if not power. Armed with this information, Helen’s extended family and others like them can make informed decisions about whether or not to have children, and what to expect if they do.
Mark Yandell, Ph.D., a computational geneticist and Utah Genome Project

(UGP) investigator, relayed the tale as part of the “Genetics of Storytelling” panel last Friday at the Sundance Film festival in Park City, Utah. A collection of artists and scientists, the panel discussed film as a dynamic medium for conveying the power of science and medicine.
“We hope to discover new narratives in our heart, our history, and our genes which is where the story lives,” said moderator Geralyn Dreyfous.
Within the UGP, those stories abound. Already, The Atlantic

has explained how the 14-generation story of a pilgrim family led to discoveries that are preventing modern descendants from dying young of inherited colon cancer. These “previvors” are outliving their ancestors. 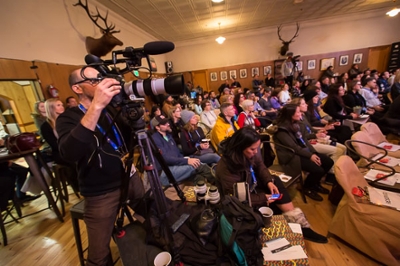 “The research has progressed to the point that people with this disease no longer need to fear cancer,” said UGP and Huntsman Cancer Institute

searching for families who have no idea that their heart could seize unexpectedly. Giving them a simple treatment of beta-blockers could prevent them from becoming the casualty of a misspelled gene.
There is no need to invent stories when telling a true tale can fill a valuable role, said film director Christian Frie. That job could be to raise awareness, bolster support, or stir conversation.
His movie “Genesis 2.0

” fills the latter category by depicting legendary geneticist George Church’s ethically dicey efforts to resurrect the wooly mammoth that has been extinct for over three millennia. “Our job as artists is to turn science into a language people can understand,” he says.
The Ogden syndrome story is one that’s ripe for the telling, but it’s far from over.
With sophisticated algorithms, Yandell is tracing the boys’ genetic variation back in time. Born in 1807, their great-great-great-great-great grandmother also carried the mutation.
Consider what it could mean to go back even further, he mused. We rarely think about the effects that genetic disease had on our caveman ancestors. “When we can extrapolate data, it has a huge impact on understanding human health and death.” 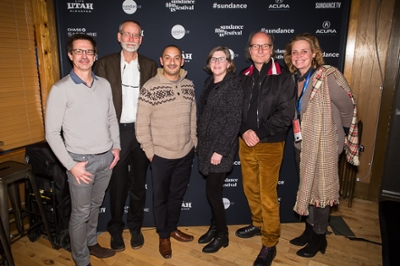 Group picture: Martin Tristani-Firouzi, Mark Yandell, Vineet Mehra (Ancestry DNA), Deborah Neklason, Christian Frei, Geralyn Dreyfous. Credit: Charlie Ehlert
These aren’t just stories of despair. There are many stories of hope. “It’s natural to think about the bad side of knowing your genetics, particularly when you have family dying around you,” said Yandell. “Genetics can also bear good news. It might say that no, you don’t have the mutation, and you never have to worry about it again.”
Utah Genome Project is all about understanding the narrative that lives within us. Along with drama, intrigue, and glory, there is a story that continues to unfold.
Sounds like the making of a good movie.
Source: http://uofuhealth.utah.edu/utah-genome-project/blog/2018/01/sundance.php