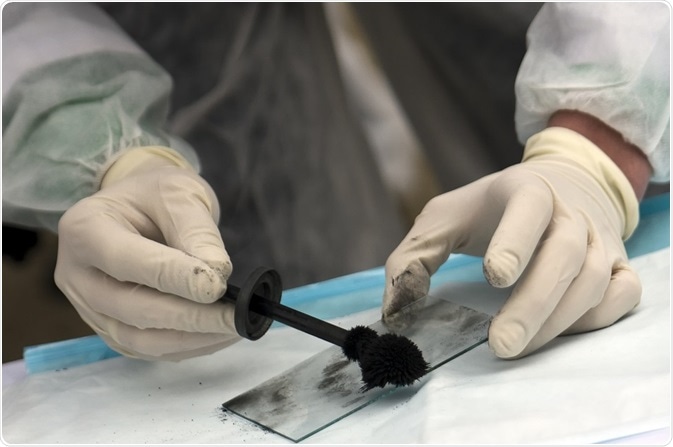 Credit: Alexandru-Radu Borzea/ Shutterstock.com
The most publicized forensic technique is DNA fingerprinting, which can be used to eliminate or further incriminate potential suspects from a police enquiry. The truth is that this represents just the tip of the iceberg.
Forensic laboratories have a wealth of analytical methodologies at their disposal and, with ongoing technological advances, the capabilities of forensic analysis continues to increase. However, with so many next-generation technologies being developed, people would be forgiven for believing that some of the techniques are solely the premise of fictional dramas rather than being scientific realities.
Forensic evidence is now a fundamental aspect of the criminal justice system, being used to establish the guilt or innocence of potential suspects, determine the origins of drugs and other chemicals and detect links between separate crimes.
As criminal activity can arise in many forms and take place in a host of different environments, the nature of the evidence available can vary widely. It may be impressions in materials at the crime scene, such as footprints and markings on bullet casings or perhaps traces of body fluids, drugs or explosives.
In addition, forensic science has become an important tool in the fight against terrorism, through the detection of traces of explosives, for example in improvised devices intended to cause mass devastation, or the identification of devices and their likely origin in the aftermath of an act of terrorism.
Since potential evidence can arise in numerous guises, it follows that a wide range of different techniques are needed to analyze them and uncover the information they contain that could assist in solving the crime and bringing the perpetrator to justice. in forensic analyses.
The techniques used forensic science actually draw on knowledge from all the sciences, including physics, chemistry, biology, computer science and engineering. The resulting array of analytical methodologies include various forms of imaging and optical sensing.
Continuing technological advances are achieving ever-greater analytical capabilities, in terms of sensitivity, specificity, accuracy, efficiency, throughput, or data quality and it is important that the latest technologies are made available to forensic laboratories in a timely manner.
This is a key objective of the National Institute of Justice (NIJ) that is dedicated to advancing scientific research in order to create or enhance tools and techniques to identify, collect, analyze, interpret and preserve forensic evidence.
In 2017, NIJ funded a range of projects aimed at developing forensic science capabilities. These included studies of novel spectroscopic techniques, improved analysis of fingerprints, identification of body fluids, and addition of entries in the national powder database to facilitate the identification of gunpowders found at crime scenes.
Several novel analytical technologies, such as laser-induced breakdown spectroscopy, deep ultraviolet spectroscopy, hyperspectral imaging, and ultraviolet Raman spectroscopy, have already found applications in forensic science.
Read Bruce McCord's interview "Epigenetics: A New Tool for Forensic Detectives"
Analysis of trace evidence plays an essential role in the identification and prosecution of the perpetrators of crime. Information obtained from materials and body fluids collected from a crime scene can provide a picture of events surrounding a crime and link potential suspects to the area where the crime was committed.
Improvements in analytical technologies to enhance their selectivity or sensitivity can allow more reliable or specific information to be obtained from evidence, whereby increasing the efficiency with which guilty parties can be identified and convicted.
For example, MinION sketching has provided a more rapid and cost-effective means of matching DNA samples using comparison of single nucleotide polymorphisms. Furthermore, using Raman Spectroscopy it is now possible to identify the nature of a fluid stain, be it saliva, semen or blood, with a single test since each type of body fluid has its own characteristic Raman spectral signature.
Analysis of microbiomes, the bacterial colonies present on human skin, also holds promise for predicting the physical traits and lifestyle of an individual and associating them with evidence and environments.
In gun crimes, the trace evidence may be in the form of gunshot residue or spent bullet casings. Developments in vibrational spectroscopy have enabled forensic scientists to discern the calibre and type of weapon from traces of gunpowder. In addition, 3D scanning technologies have facilitated the analysis of the specific marking left on a bullet by the issuing weapon.
Such toolmark analysis can identify from which weapon the bullet was fired. Now that digital images of the toolmarks can be created, it is easier to catalogue them, share them and compare them between crimes.
Deep ultraviolet resonance Raman spectroscopy and hyperspectral imaging technologies, both of which are possible in portable handheld devices, are showing much promise for improving the stand-off detection of traces of explosives.
Progress has even been made in detecting explosive in improvised devices, which is more challenging since the presence of multiple additional components that can interfere with imaging. Portable laser-induced breakdown spectroscopy (LIBS) and quantum cascade laser (QCL) instrumentation are also proving beneficial for a variety of forensic analyses.

Pittcon 2018 : Feb 26 - Mar 1
Register for Pittcon 2018
Orange County Convention Center, Orlando, Florida, USA
Pittcon 2018 will comprise a comprehensive program of symposia, oral presentations, short courses, poster sessions, and industry-sponsored demonstrations of cutting-edge technologies.
A session dedicated to scientific innovations applicable to forensic science will provide further details of the innovations highlighted in this article as well as exploring the application of additional technological advances in forensic science.
Numerous market-leading producers of equipment designed to facilitate rapid and reliable analysis of forensic evidence and to detect traces of explosives in the fight against terrorism, including Bruker, Cadre Forensics, ChemImage, Ibsen Photonics, Ocean Optics, and Renishaw, will also be attending Pittcon 2018 to showcase the latest additions to their capabilities.

Pittcon® is a registered trademark of The Pittsburgh Conference on Analytical Chemistry and Applied Spectroscopy, a Pennsylvania non-profit organization. Co-sponsored by the Spectroscopy Society of Pittsburgh and the Society for Analytical Chemists of Pittsburgh, Pittcon is the premier annual conference and exposition on laboratory science.
Proceeds from Pittcon fund science education and outreach at all levels, kindergarten through adult. Pittcon donates more than a million dollars a year to provide financial and administrative support for various science outreach activities including science equipment grants, research grants, scholarships and internships for students, awards to teachers and professors, and grants to public science centers, libraries and museums.
Visit pittcon.org for more information.
Sponsored Content Policy: News-Medical.net publishes articles and related content that may be derived from sources where we have existing commercial relationships, provided such content adds value to the core editorial ethos of News-Medical.Net which is to educate and inform site visitors interested in medical research, science, medical devices and treatments.
Last updated: Feb 23, 2018 at 10:58 AM
Publicado por salud equitativa en 10:37