Heavy metal in the treatment of cancer

Many of the heavy metals have crucial biological functions in the human body, yet they are usually highly toxic. The body's need for them along with their oxidation-reduction properties allow them to avoid the body's protective mechanisms when levels rise above safe limits. 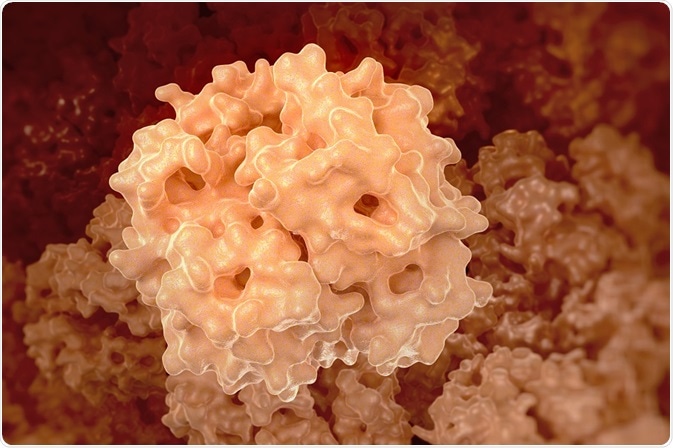 Hemoglobin (human, Hb) protein molecule, chemical structure. Credit: Tatiana Shepeleva
The excess heavy metal ions bind with protein sites that are not made for them and prevent the target metals from reaching their natural binding sites. This leads to cell malfunction and ultimately toxicity.1
Despite their toxicity, heavy metals have been used in medicine for hundreds of years and their importance as treatment options are undisputed. They have therapeutic applications across a range of indications, including microbial infections, ulcers, arthritis and they have proved especially valuable in the battle against cancer. 1
Arsenic, antimony, gold, vanadium, platinum and iron are just a few of the heavy metals widely used in cancer chemotherapy. They have demonstrated impressive efficacy in destroying or preventing the growth of tumor cells, yet their use is often limited by toxicity, such as hepatotoxicity, nephrotoxicity or myelotoxicity2,3.
Chelation therapy has been widely used to clean up excess circulating metal ions to reduce side effects from metallic poisoning after administration of treatments containing heavy metals.

A recent addition to the list of heavy metal cancer treatments is μ-oxo-N,N’-bis(salicylidene)ethylenediamine iron, known as iron-salen or (Fe(Salen))4. Iron-salen works in a similar way to the established chemotherapy agent, cisplatin. Targeted anti-tumor activity has been demonstrated with iron-salen and it has the potential to be a potent single-drug anticancer agent5,6.
Iron-salen has the added benefit of being intrinsically magnetic meaning that it can be made to accumulate locally using a permanent magnet. Consequently, with the application of a magnetic field, iron-salen can be used as a targeted drug delivery system detectable by magnetic resonance imaging.
In addition, application of an alternating magnetic field will give rise to the production of heat, making iron-salen suitable for targeted hyperthermic therapy to specifically destroy cancer cells in situ4,5. However, excess iron-salen has been shown to induce liver dysfunction and renal dysfunction in mice.
Iron is a crucial element for the growth and survival of almost all living organisms, largely because its potential for conversion between ferrous (Fe2+) and ferric (Fe3+) ions makes it ideal for various biological redox processes.
Iron is an essential component of hemoglobin and several enzymes, yet when not bound to protein it results in the release of a wide range of harmful free radicals that attack DNA, causing cellular damage, mutation and malignant transformations7.
High levels of circulating unbound iron can penetrate into cells of the heart, liver and brain causing serious damage. Consequently, although iron-containing compounds can provide effective treatment solutions, they can also increase morbidity and mortality.
It is thus necessary to identify a suitable means for neutralizing excess iron-salen before it can be widely used in clinical applications4.

Deferoxamine mesylate (DFO) is an iron-chelating agent and has been a gold standard treatment for controlling excess iron for several decades. It is a hexadentate siderophore that has a very high affinity for iron.
DFO-iron complexes are metabolically inactive, do not produce free radicals and are readily cleared from the body via the kidneys8,9. DFO has been shown to effectively manage circulating iron ions and it is generally considered to be safe10,11.
DFO thus represented an obvious choice as a chelating agent to prevent accumulation of excess iron after treatment with iron-salen. A recent pre-clinical study has confirmed the efficacy of DFO as an antidote for reducing toxicity resulting from treatment with iron-salen12.
DFO was shown to bind free iron in iron-salen, whereby increasing its efficacy and reducing side effects. DFO also decreased the magnetism of iron-salen.
Iron-salen magnetism was evaluated using a Bruker EMX-8/2.7 ESR spectrometer. The chemical chelating reaction between iron-salen and DFO were performed using UV‑Vis spectroscopy.
Iron-salen was administered intravenously to mice and subsequent administration of DFO was shown to effectively limit cytotoxicity and the generation of free radicals by iron-salen in cancer cells.
DFO reduced acute liver and renal dysfunction after therapeutic doses of iron-salen and improved survival rate after a fatal dose of iron-salen. Furthermore, the anti-cancer effects of iron-salen could be modified by adjusting the concentration of DFO added. This could facilitate the provision of minimally invasive cancer chemotherapy.
The promising results of this study indicate that DFO is a potential antidote for iron-salen based cancer treatments.