Researchers at Juntendo University report in Neurology the potential use of blood levels of caffeine and its byproducts as biomarkers for Parkinson’s disease. The finding is promising for the development of a method enabling early identification of the disease. 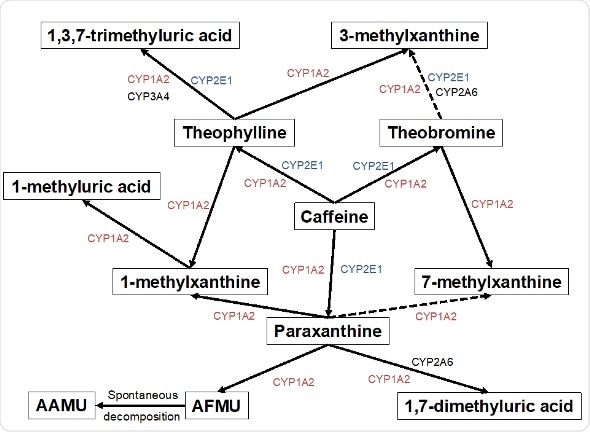 Caffeine and its byproducts (metabolites) after intake in the human body. Levels of these molecules in the blood are lower for patients with Parkinson’s and can hence serve as biomarkers for the disease.
Parkinson’s disease is a degenerative disorder of the central nervous system, affecting the latter’s motor system — the part controlling bodily motion. Its symptoms include shaking, rigidity and difficulty with walking. There is evidence that daily caffeine consumption reduces the risk of developing Parkinson’s.  Now, a team of researchers led by Nobutaka Hattori from Juntendo University School of Medicine have studied how traces of caffeine in the blood, after drinking coffee, can be indicative of Parkinson’s disease. The researchers found that caffeine levels are significantly lower in patients with the disease; caffeine concentrations could therefore be used as an indicator of Parkinson’s, particularly in its early stages.
Video: Professor Nobutaka Hattori describing his group's research on Parkinson's disease.

The researchers studied a group of 139 people, both men and women, with and without Parkinson’s disease. Each person drank between 0 and 5 cups of coffee per day (except for one participant who drank more than six). Then, they checked the participants’ blood serum for traces of caffeine and its 11 so-called downstream metabolites — small molecules produced during caffeine-induced metabolic processes in the human body.
The scientists found that the serum levels of caffeine and of almost all metabolites, including theophylline, theobromine and paraxanthine — caffeine’s main byproducts — were lower in patients with Parkinson’s disease. Although the data obtained by Hattori’s team show that there is a clear relation between a person’s caffeine (metabolite) serum levels and having Parkinson’s disease, there was no significant association between the severity of the disease and the concentration of any of the caffeine-related substances. Also, there was no significant difference in serum levels between male and female patients (males are known to suffer more often from Parkinson’s disease).
The findings of Hattori and colleagues suggest that caffeine and caffeine metabolite levels in the blood can be, quoting the researchers, “early diagnostic biomarkers for the [Parkinson’s] disease”; moreover, the results “further indicated the neuroprotective effects of caffeine”.
Source:
http://www.juntendo.ac.jp/
Publicado por salud equitativa en 10:59