By Sally Robertson, BScFebruary 22, 2018
Research led by scientists at the University of Illinois, Chicago, have established how glial cells may modulate the activity of nerve cells. The study suggests that glial cells modulate neurotransmitter release by increasing the acidity of the immediate extracellular environment. 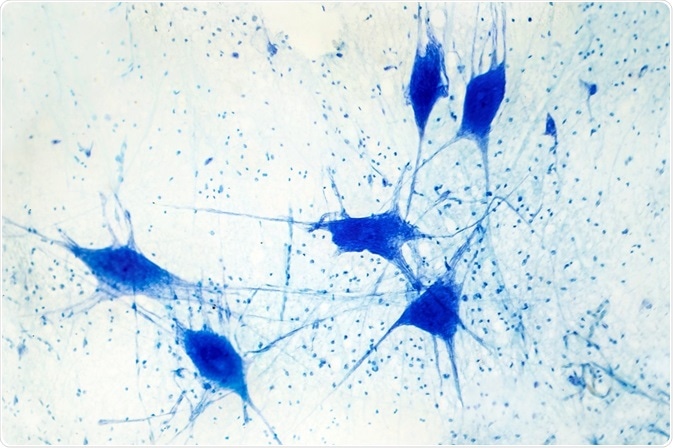 Credit: kateryna kon/ Shutterstock.com
Previous studies have suggested that a common neurotransmitter, adenine triphosphate (ATP), may be involved in the signalling process that occurs between glial cells and nerve cells.
As reported in PLOS ONE, when Robert Paul Malchow and team applied ATP to retinal glial cells, they observed an immediate, mass release of acid from the cells that raised the acidity of the immediate extracellular environment.

We decided to further investigate ATP and glial cells because of this really strong response that raised acid levels in the environment right next to the glial cells more than 1000 percent,"
Robert Paul Malchow,University of Illinois

The study showed that an increase in ATP outside of the nerve cells triggered adjacent glial cells to release hydrogen ions, which increased the acidity of the extracellular environment. The hydrogen ions bind to calcium channels located in the membranes of nerve cells, closing those channels off. When open, the channels enable the release of neurotransmitters.
"Increases in acidity in the extracellular environment produced by the glial cells forms a feedback loop which prevents the release of too much neurotransmitter," Malchow explains.
For the study, the team used highly sensitive pH sensors to measure alterations in pH around retinal glial cells isolated from various organisms, including humans. The sensors were developed by the Marine Biological Laboratory.
The team propose that the release of neurotransmitters from nerve cells is decreased by the acid the glial cells release, with the acid binding to and blocking the neuronal calcium channels that modulate the release of neurotransmitters.
"We believe that this ATP-mediated release of protons by glial cells acts as an essential feedback mechanism throughout the nervous system to limit over-excitability of neurons," concludes Malchow.
Source:
https://www.eurekalert.org/pub_releases/2018-02/uoia-hdn022118.php
Publicado por salud equitativa en 10:06