Researchers at The Ohio University have uncovered the mechanism by which thymine and guanine, the most commonly mutated bases in DNA, become damaged. 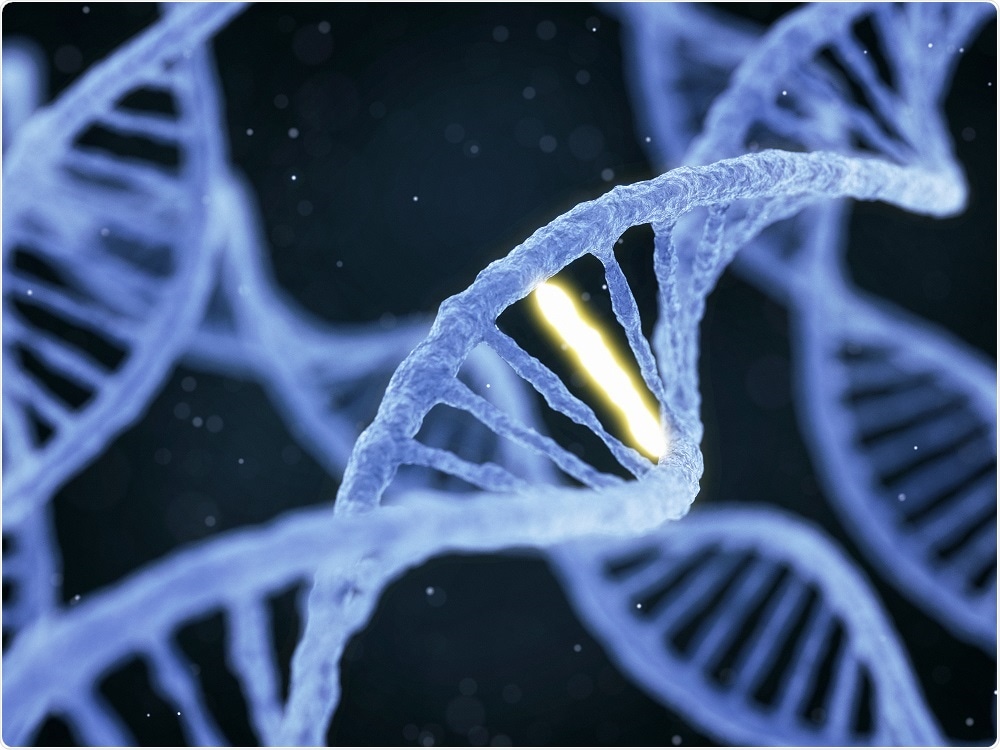 Credit: Konstantin Faraktinov/Shutterstock.com
The study, which was recently published in the journal Nature, describes the ability of two normally mismatched bases in human DNA, thymine and guanine, to change shape in order to form a ring on the helical DNA "ladder”.
This allows them to evade the body's natural defense systems against genetic mutations.

When these two bases form a hydrogen bond by accident, at first, they don't fit quite right. They stick out along the DNA helix, so normally it's easy for the enzymes that replicate DNA to detect them and fix them. But once in a while, before they can be detected, they change shape. It's almost as if the two bases are able to 'fix' each other, so they can fit like a normal base pair and escape DNA repair mechanisms.”
Dr. Zucai Suo, Corresponding Author and Professor of Chemistry The Ohio State University

The study reinforces the work on other types of DNA mutations, which are responsible for diseases, as well as normal aging and even evolution.
Four bases make up DNA. These are: Adenine (A), thymine (T), cytosine (C), and guanine (G), and each has its own size and shape.
Adenine (A) always pairs with thymine (T), and cytosine (C) always pairs with guanine (G). This is the basis of the "Watson–Crick" model of the DNA sequence of  organisms. When DNA bases mispair, for example, if G pairs with T, mutations arise.
G-T mutations are the single most common mutation in human DNA, and occur about once in every 10,000 to 100,000 base pairs. However, cHoweveHompared to the 3 billion base pairs present in the human genome, it is a negligible value.
The current study provides the researchers with an insight into mutations for a better understanding about the pathogenesis of numerous diseases including cancer and also supports future research in the field.
Although researchers postulated that the G-T mispair shape-shifted so as to resemble a normal G-C or A-T pair, this phenomenon had not been directly witnessed until the researchers from Duke University identified that these Watson-Crick-like G-T mispairs form in so-called "naked" DNA.

An interesting question is: What determines the mutation rate in a living organism. From there, we can begin to understand the specific conditions or environmental stressors that can elevate errors."
Dr. Hashim M. Al-Hashimi, Co-Author and Biochemist Duke University

The researchers used a DNA polymerase to implant a G–T mispair into a DNA strand.
By hindering the chemical reaction at different intervals and examining the resulting DNA molecules, they measured the efficiency of the polymerase in forming the G–T mispair.
The scientists concluded that the pairing of G and T bases occur initially in a distorted way. Almost immediately after the mispairing event, the bases re-arrange their chemical bonds so that they split into the shape of a normal base pair, deceiving the polymerase into completing the chemical reaction. This resulted in a mutation.
This mechanism is considered to be a great achievement by the genome as it has to overcome the fundamental physics. The mechanism of base requires sufficient energy, and the easiest, most energy-efficient pairs formed are always the right ones, A–T and C–G.
The G–T pair has to forcibly overcome an energy barrier to form and maintain itself. It emerges when the G and T bases change shape, they become more energy efficient–still less efficient than a normal base pair.
The researchers will now try to replicate the experiments with another, somewhat less common mutation, the A–C mispair.
Source:
https://www.eurekalert.org/pub_releases/2018-02/osu-srh020118.php
Publicado por salud equitativa en 6:15