New research published in the online journal BMJ Open reveals that eating at a slow speed, as well as avoiding eating within 2 hours of going to sleep and after dinner snacks might all help reduce body weight. These adjustments are linked with lower obesity and weight (BMI), and smaller waist circumference. 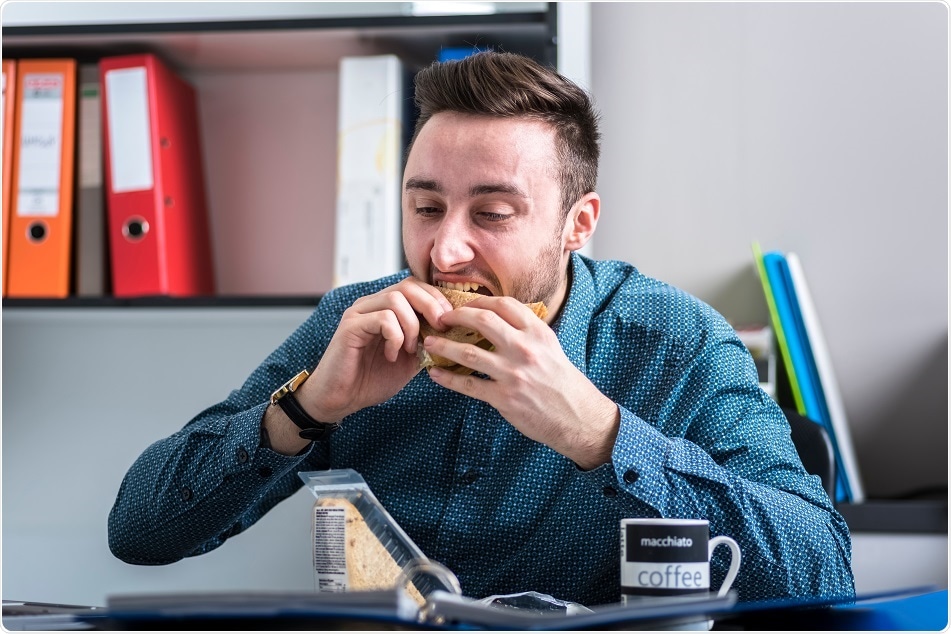 Credit: rlat/ Shutterstock.com
The research findings are based on health insurance data for nearly 60,000 people with diabetes in Japan, who had submitted claims and had routine health check-ups between 2008 and 2013.
The data of the claims comprised information on the dates of consultations and therapies, and the check-ups incorporated the measurements of BMI and waist circumference, and results of blood tests, urine tests and tests for liver function.
During the check-ups, people were interviewed about their lifestyle including their eating and sleep habits along with tobacco and alcohol use. They were specifically questioned about their speed of eating, which was classified as slow, normal or fast.
They were also asked whether they indulge in any of the following activities three or more times a week; eating after 2 hours of going to sleep; snacking after dinner, and skipping breakfast.
About 36.5% of the participants had just a single check-up over six years, 29.5% had undergone two check-ups and only 20% had three check-ups. At the beginning of the study, 22,070 people indulged in speed eating; 33,455 people had a normal eating speed; and 4192 ate slowly.
The findings of the study showed that slow eaters tend to be healthier and possess a healthier lifestyle compared to those who eat at either a fast or normal speed. Around 52% of the total sample changed their eating speed over the six year study.

After analyzing all influential factors, the researchers found that compared to people who indulge in fast eating, people with normal eating speeds were 29% less likely to be obese, and slow eaters were 42% less likely.
Although absolute reductions in waist circumference--an indicator of a potentially harmful midriff bulge--were small among the fast eaters, they were higher among the slow and normal speed eaters.
Eating within 2 hours of going to sleep and snacking after dinner for 3 or more times a week were found to elevate BMI levels, yet skipping breakfast was not reflected in the levels of BMI.
As the current research was an observational study, no firm conclusions were drawn about cause and effect – added to which eating speed was based on subjective assessment – nor did the researchers examine the physical activity or energy intake levels, both of which may have been influential.
Researchers suggest that fast eating is linked to reduced glucose tolerance and insulin resistance. Fast eaters take a longer time to feel full, whereas slow eaters may feel satisfied more rapidly, which helps them to reduce their calorie intake.
"Changes in eating habits can affect obesity, BMI, and waist circumference. Interventions aimed at reducing eating speed may be effective in preventing obesity and lowering the associated health risks," the researchers added.
Source:
Publicado por salud equitativa en 11:27