In support of improving patient care, this activity has been planned and implemented by Medscape, LLC and Emerging Infectious Diseases. Medscape, LLC is jointly accredited by the Accreditation Council for Continuing Medical Education (ACCME), the Accreditation Council for Pharmacy Education (ACPE), and the American Nurses Credentialing Center (ANCC), to provide continuing education for the healthcare team.
Medscape, LLC designates this Journal-based CME activity for a maximum of 1.00 AMA PRA Category 1 Credit(s)™. Physicians should claim only the credit commensurate with the extent of their participation in the activity.
All other clinicians completing this activity will be issued a certificate of participation. To participate in this journal CME activity: (1) review the learning objectives and author disclosures; (2) study the education content; (3) take the post-test with a 75% minimum passing score and complete the evaluation at http://www.medscape.org/journal/eid; and (4) view/print certificate.
Release date: February 16, 2018; Expiration date: February 16, 2019

Using China’s national surveillance data on hand, foot and mouth disease (HFMD) for 2008–2015, we described the epidemiologic and virologic features of recurrent HFMD. A total of 398,010 patients had HFMD recurrence; 1,767 patients had 1,814 cases of recurrent laboratory-confirmed HFMD: 99 reinfections of enterovirus A71 (EV-A71) with EV-A71, 45 of coxsackievirus A16 (CV-A16) with CV-A16, 364 of other enteroviruses with other enteroviruses, 383 of EV-A71 with CV-A16 and CV-A16 with EV-A71, and 923 of EV-A71 or CV-A16 with other enteroviruses and other enteroviruses with EV-A71 or CV-A16. The probability of HFMD recurrence was 1.9% at 12 months, 3.3% at 24 months, 3.9% at 36 months, and 4.0% at 38.8 months after the primary episode. HFMD severity was not associated with recurrent episodes or time interval between episodes. Elucidation of the mechanism underlying HFMD recurrence with the same enterovirus serotype and confirmation that HFMD recurrence is not associated with disease severity is needed.
Hand, foot and mouth disease (HFMD) is a common childhood infectious disease that is mainly caused by enterovirus A71 (EV-A71), coxsackievirus A16 (CV-A16), and CV-A6 (1). Most HFMD patients exhibit a benign, self-limiting illness characterized by skin eruptions on the hands, feet, or buttocks and ulcers or blisters in the mouth with or without fever (2). However, some patients develop neurologic or cardiopulmonary complications or die (3,4). In the past 2 decades, outbreaks of HFMD have been documented in countries of the Western Pacific, including Malaysia, Japan, Singapore, Vietnam, and Cambodia (5–9). In China, HFMD has been prevalent since 2007. During 2008–2015, ≈13 million HFMD cases were reported, including 123,261 severe cases and 3,322 deaths in 31 provinces of mainland China.
Three inactivated monovalent EV-A71 vaccines have been licensed in China. Phase 3 clinical trials proved these vaccines had high efficacy (90.0%–97.4%) against EV-A71–associated HFMD (10,11) but did not confer cross-protection for HFMD caused by non–EV-A71 enteroviruses (11). A natural infection with EV-A71 also confers no or only short-term (<2 months duration) cross-protection against CV-A16–associated illness (12,13). Because of this limited cross-protection from infections of different enterovirus serotypes, multiple HFMD episodes can occur in a single person. Although observational studies indicate that the antibody response induced by the EV-A71 vaccine could last >2 years, reinfection with an enterovirus of the same serotype is still possible because the immunity induced by a natural enterovirus infection might not be lifelong (14). We accessed the national surveillance data for HFMD diagnosed during 2008–2015 in China, in an attempt to describe the epidemiologic features of patients with recurrent HFMD and examine the relationship between disease severity and HFMD recurrence.

As described previously (1), HFMD cases were reported voluntarily to the Chinese Center for Disease Control and Prevention (China CDC) during January 1, 2008–May 1, 2008, and starting May 2, 2008, cases were mandatorily reported online to China CDC within 24 hours after diagnosis. We collected information on basic demographics (name, sex, national identification number, date of birth, home address, name of either of the patient’s parents, contact telephone number); case classification (probable or confirmed); disease severity (severe or mild); date of illness onset, diagnosis, and death (if applicable); and enterovirus serotype (for confirmed cases). For virologic surveillance, clinical specimens were collected from a subsample of cases from each province and tested by PCR with primers and probes for panenterovirus, EV-A71, and CV-A16. We assumed that the enterovirus identified in HFMD patient samples was the causative enterovirus of the HFMD episode.
We included the HFMD surveillance data of 29 provinces of mainland China collected during January 1, 2008–December 31, 2015. We excluded data from Hunan and Hubei Provinces from this study because (since 2010 for Hunan Province and 2012 for Hubei Province) most of the hospitals in these provinces reported EV-A71 infection on the basis of EV-A71 IgM antibody detection assays, which are unreliable tests (15–17).

We defined a probable HFMD patient as a patient who had rashes on the hands, feet, mouth, or buttocks and ulcers or vesicles in the mouth with or without fever. We defined a laboratory-confirmed patient as a probable patient with laboratory evidence of infection with EV-A71, CV-A16, or other enteroviruses. The diagnostic tests used for enterovirus detection were reverse transcription PCR and real-time reverse transcription PCR. Patients were classified as having severe HFMD if they had any complications (i.e., aseptic meningitis, brainstem encephalitis, encephalitis, encephalomyelitis, acute flaccid paralysis or autonomic nervous system dysregulation, pulmonary edema, pulmonary hemorrhage, or cardiorespiratory failure). Otherwise, patients were classified as having mild HFMD. 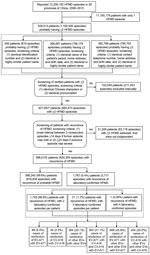 We used medians and interquartile ranges (IQRs) to describe continuous variables and numbers and percentages to summarize categorical variables. We used logistic regression with the forward stepwise selection approach to explore the association between HFMD recurrence and severe disease. We denoted the results as odds ratios (ORs) with 95% CIs. All statistical tests were 2-sided, and we considered an α of 0.05 statistically significant.
We defined the probability of HFMD recurrence as the probability of occurrence of HFMD among children who previously had HFMD and estimated recurrence using survival analysis (the Kaplan-Meier method). To calculate the probability of HFMD recurrence, we took only the event of interest into account and censored other events at the end of observation. When estimating the probability of HFMD recurrence, we enrolled all patients with recurrent HFMD (whether probable or laboratory-confirmed) in the analysis. We censored patients with only 1 HFMD episode. When estimating the probability of reinfection after EV-A71 with EV-A71, we included only the case-patients with a primary episode of EV-A71 infection who were later reinfected with EV-A71. We censored case-patients who had just 1 infection with EV-A71 (i.e., case-patients who were infected with EV-A71 then infected with CV-A16 or other enteroviruses, case-patients who were infected with EV-A71 then had probable HFMD, and case-patients with a single episode of EV-A71 infection). We used similar analyses to estimate the probability of reinfection with the same serotype for other serotypes of enterovirus.
We also conducted a sensitivity analysis to account for the uncertainty of the intervals used to define 2 independent HFMD episodes; in this analysis, we used 16 days (for previous mild episodes) and 61 days (for previous severe episodes) as cutoff values, which were derived from another investigation conducted in China that also investigated HFMD recurrence (27). We conducted data cleaning and analyses using R Project version 3.2.5 (http://cran.r-project.org) and ArcGIS 10.2 (http://www.esri.com/arcgis/about-arcgis). This study was approved by the ethics review committees of China CDC (Beijing, China).
Top

Unsurprisingly, we found that illness severity was inversely associated with age and onset-to-diagnosis interval. EV-A71 infections (OR 7.2, 95% CI 4.0–13.0) and other enterovirus infections (OR 2.7, 95% CI 1.5–5.0) were more severe than CV-A16 infections. Patients who lived in urban areas also had increased risk for severe illness (OR 1.8, 95% CI 1.3–2.5). After adjusting for these risk factors, recurrent HFMD episodes were not found to be associated with illness severity, which means the second and third HFMD episodes did not appear to be more or less severe than the first episode. In addition, the interval between the 2 episodes was not related to disease severity of the latter episode (OR 0.97, 95% CI 0.95–1.01) (Table 2).
Top

We thank staff members at the Bureau of Disease Control and Prevention, the National Health and Family Planning Commission of China, and provincial and local departments of health for providing assistance in coordinating the data collection. We also thank staff members at the county, prefecture, and provincial levels of CDCs and hospitals for data collection.
This study was supported by grants from the National Science Fund for Distinguished Young Scholars (no. 81525023 to H.Y.), the National Natural Science Foundation of China (no. 81473031 to. H.Y.), the Li Ka Shing Oxford Global Health Programme (no. B9RST00-B900.57 to H.Y.), and TOTAL Foundation (no. 2015-099 to H.Y.). The funders had no role in study design, data collection and analysis, decision to publish, or preparation of the manuscript.
Top

To obtain credit, you should first read the journal article. After reading the article, you should be able to answer the following, related, multiple-choice questions. To complete the questions (with a minimum 75% passing score) and earn continuing medical education (CME) credit, please go to http://www.medscape.org/journal/eid. Credit cannot be obtained for tests completed on paper, although you may use the worksheet below to keep a record of your answers.
You must be a registered user on http://www.medscape.org. If you are not registered on http://www.medscape.org, please click on the “Register” link on the right hand side of the website.
Only one answer is correct for each question. Once you successfully answer all post-test questions, you will be able to view and/or print your certificate. For questions regarding this activity, contact the accredited provider, CME@medscape.net. For technical assistance, contact CME@medscape.net. American Medical Association’s Physician’s Recognition Award (AMA PRA) credits are accepted in the US as evidence of participation in CME activities. For further information on this award, please go to https://www.ama-assn.org. The AMA has determined that physicians not licensed in the US who participate in this CME activity are eligible for AMA PRA Category 1 Credits™. Through agreements that the AMA has made with agencies in some countries, AMA PRA credit may be acceptable as evidence of participation in CME activities. If you are not licensed in the US, please complete the questions online, print the AMA PRA CME credit certificate, and present it to your national medical association for review.
Article Title:
Epidemiology of Recurrent Hand, Foot and Mouth Disease, China, 2008–2015