By Cashmere Lashkari
Chronic Obstructive Pulmonary Disease (COPD) refers to a group of lung ailments that can cause breathing difficulties. The two most common disorders associated with COPD are Emphysema and Chronic Bronchitis. 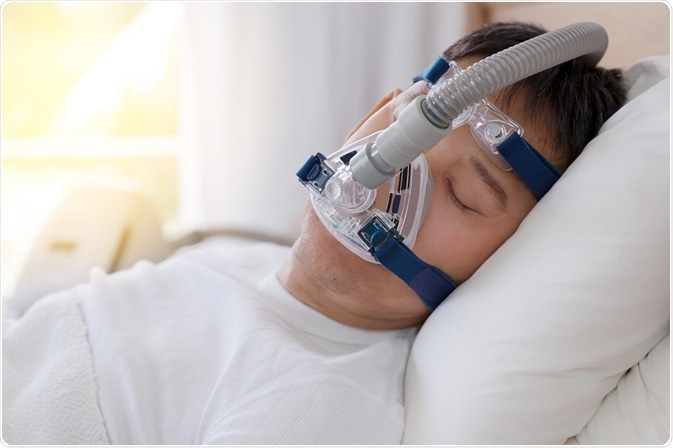 Credit: sbw18/Shutterstock.com
Emphysema refers to damage to the alveoli (air sacs) within the lungs. Chronic Bronchitis is characterized by damage to the lining of the airways that supply the lungs. These airways comprise tubes known as bronchial tubes.
Symptoms of COPD include breathlessness, coughing, frequent chest infections, wheezing, blue lips or nails, fatigue, and swelling of ankles and legs. Severe COPD can result in loss of appetite and weight loss.
COPD causes damage to the lungs that is permanent and irreversible. The disorder can only be managed with medication, which slows down the progression of the disease.

What is Sleep Apnea?

Sleep Apnea, also known as Obstructive Sleep Apnea (OSA), is a common condition wherein the individual nearly stops breathing or actually stops breathing for about 10 seconds whilst sleeping.
In this condition, the upper airway collapses during sleep, causing repeated rounds of hypoxemia (or abnormally low oxygen levels in the blood). More than five respiratory events need to occur in one night for a person to be diagnosed with OSA.
Each time the airways collapse, the person wakes up. This results in sleep deprivation due to an inconsistent sleeping pattern.
Patients experience excessive daytime sleepiness, improper neurocognitive functioning, memory loss, erectile dysfunction, hypertension, and a greater risk of falling asleep at crucial times during the day. In the past, this has resulted in automobile accidents. It also causes disruption to family life.

What is Overlap Syndrome?

As both COPD and OSA affect the individual’s ability to breathe, there are times when both may be present in an individual. This is known as the Overlap syndrome.
Studies conducted by the American Sleep Apnea Association have found that almost half the people with COPD have trouble breathing while sleeping, referring to some level of sleep apnea.
Overlap syndrome occurs in 1% of adults, and causes nocturnal hypoxemia and hypercapnia to be worse than in patients suffering from these lung disorders individually.
While hypoxemia means that the person has abnormally low levels of oxygen in their blood, hypercapnia refers to abnormally high carbon dioxide levels in their blood. Both of which cause dangerous alterations to normal metabolic processes of the body.

In most cases of overlap syndrome, the individual is usually known to be suffering from COPD or OSA. Overlap syndrome is subsequently diagnosed upon further.
COPD is usually identified first and then, as patients complain about sleeping difficulties, they may undergo an overnight sleep study.  The overnight study helps identify breathing patterns that are characteristic of sleep apnea.
Blood samples may also be taken to measure blood oxygen during the night. Once the syndrome has been diagnosed, efforts can be made to help the patient to breathe easier and get a better night’s sleep.

Treatment of overlap syndrome focuses on maintaining the proper level of oxygen in the blood and preventing sleep disordered breathing.
Weight loss is recommended for those who are obese and suffer from OSA. A well-balanced diet and regular exercise program is also beneficial.
Oxygen therapy is used as a treatment to combat hypoxemia. The best results are seen when oxygen is supplemented for more than 18 hours a day, especially during sleep.
The recommended treatment duration is two weeks. If there is no improvement during this time, the patient will be taken off oxygen therapy.
Continuous Positive Airway Pressure (CPAP) is a standard treatment procedure for OSA. It involves using  positive airway pressure ventilator. This ensures that the repeated collapse of the upper airway does not take place.
The mild air pressure contributed by the ventilator keeps the airways from collapsing due to OSA. This allows the individual to breathe easily at night. A number of research studies attempting to identify new, non-invasive ventilation techniques are currently underway.
Inhalers with bronchodilators and corticosteroids may be used to help the individual breathe easier.
Bronchodilators are used to relax the muscles of the bronchial, making it more comfortable to inhale and exhale. They can be short-acting, which last for 4 to 6 hours or long acting, which last for about 12 hours.
Corticosteroids are another medication that can be delivered via the lungs. These medications  reduce inflammation and prevent additional flare ups.
Reviewed by Afsaneh Khetrapal Bsc (Hons)