How do you measure pain? A patient’s furrowed brow, a child’s cries or tears—all are signs of pain. But what if the patient suffers from severe dementia and can’t describe what she is feeling or is a young child who can’t yet talk? Caregivers can help read the signs of pain, but their interpretations may differ greatly from patient to patient, because people have different ways of showing discomfort. And when the patient is unconscious, such as during surgery or while in intensive care, the caregiving team has even fewer ways to measure pain.

Patients can point to one of the faces on this subjective pain scale to show caregivers the level of pain they are experiencing. Credit: Wong-Baker Faces Foundation.
Assessing pain is an inexact science. It includes both subjective and objective measures. A patient might be asked during a subjective assessment (performed, perhaps, with a caregiver showing a pain-rating scale such as the one in the figure), “How much pain are you feeling today?” That feedback is coupled with biological markers such as an increased heart rate, dilated pupils, sweating, and inflammation as well as blood tests to monitor high levels of the stress hormone cortisol. Combined, these measurements can give doctors a fairly clear picture of how much pain a patient feels.
But imagine if members of the surgical or caregiving team could actually “see” how the patient is feeling? Such insight would let them select better drugs to use during and after surgery, tailoring care to each patient. That tool could be put into service in the operating room and by the bedside in intensive care, giving nonstop reports of pain as the patient experiences it.
An objective measure of pain also has uses beyond the operating room and intensive care unit. Given the high risk for opioid misuse, such a measure could take the guesswork out of pain management and give doctors a more accurate indication of pain levels to prevent over-prescribing opioid pain relievers.
Top Down Look at Pain
Researchers are studying several tools to see if any can reliably measure pain in an objective way. One promising technique is functional near-infrared spectroscopy (fNIRS). This noninvasive tool lets researchers measure, in real time, how the brain is responding to certain conditions, such as painful stimuli.
This top-down approach gives scientists a “window” into the brain by detecting changes in oxygen activity in the cerebral cortex, the area of the brain responsible for recognizing and synthesizing signals from across the body.
When the cortex’s activity increases, the oxygen levels also rise as a result of greater blood flow and volume to that area of the brain. In particular, changes occur in the amount of oxygenated and deoxygenated blood cells—indicating how the brain is responding to a wide range of sensations, including pain, cold, and heat. Those changes are then mapped to a chart or displayed as numbers to show the brain’s activity. Other imaging techniques can be used to measure brain activity in this same way, including magnetic resonance imaging (MRI). The chief advantage to fNIRS is that it relies on mild infrared (heat) signals rather than strong magnets or radiation, and it can be used continuously without danger to the patient or to others in the room.
David Boas (of Boston University) and David Borsook (of Boston Children’s Hospital and Massachusetts General Hospital) have developed a portable fNIRS-based device that can be wheeled to the operating room or bedside. This device is now being tested to identify patients who may need more, or a different kind of, pain reliever during surgery. 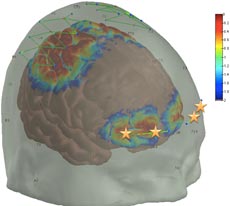 Scientists are working on using fNIRS technology to track pain. This illustration shows responses to pain in the prefrontal cortex (colored region on bottom right, near the stars). The goal is to alleviate patients’ pain before it registers in the brain. This has practical applications during surgery in patients who are unconscious and also in patients who cannot communicate, such as infants or people suffering from stroke. https://doi.org/10.1371
/journal.pone.0158975.g001

In their research, Borsook and Boas have used fNIRS to confirm a specific biomarker for assessing pain. That is, they found that placing optodes (or small sensors) on the patient’s skull above the prefrontal cortex yielded consistently accurate measures of pain (see figure). Because this is the area of the brain that determines how pain will be interpreted and what the response will be, in a sense, it “decides” what is pain. Their next step is to use the prefrontal cortex biomarker in different clinical settings with a variety of types of anesthesia and to further refine the biomarker by filtering out any background “noise” from other interfering signals. Their research team includes fNIRS specialists, pain specialists, and physicians.
Being able to assess and manage a patient’s pain during general anesthesia, when the patient is fully unconscious, is an important advance. If doctors can assess the patient’s pain load and address this pain during the surgery itself, the patient could awaken from surgery with pain already under control. There would be less need for more or additional types of painkillers to make the patient comfortable.
Borsook also believes that better pain management during surgery can help in reducing chronic pain over a patient’s lifetime. He notes that, “43 million surgeries take place each year, and 15 to 30 percent of those patients end up with chronic pain after surgery.” According to Borsook, this pain is not the result of the surgical procedure. Rather it stems from the inability to control pain while the surgery is taking place.
Patients awaken with those pain signals already hard wired into the brain, and it can be difficult to play catch up with medications to ease pain after surgery. A better approach is to squelch the signals that trigger long-term pain before they register in the brain. Taking the guesswork out of pain management during surgery then could reduce the numbers of patients who experience chronic pain, long after the initial healing is complete.
Borsook and Boas are working now to further simplify their fNIRS machine. States Borsook, “It would be ideal to have the device show a green light when the patient’s pain is being managed and a red light when pain signals are reaching the brain.” The team also is looking at ways to better evaluate ongoing pain. This is important because once the initial pain signals are generated, a wide range of inflammatory responses ensue, making nerve endings more sensitive and sometimes causing them to fire spontaneously.
Managing Opioids
An objective measuring of pain has other uses as well. Using fNIRS, researchers are exploring if it can be used to examine how opioids work to relieve pain in healthy men and women. Borsook notes, “Some drugs produce desensitized states” and may not work as effectively in a given patient over time. This is especially true with opioid use. This class of drug actually alters the prefrontal cortex, changing the way it perceives pain and how the brain responds to it. The result is that the drug either doesn’t work as well in the same doses as before (tolerance develops), or the pain seems greater than it was previously (a result of the brain interpreting it differently than before). Using an objective measure could give a clearer picture of how pain is registering in the brain and how best to respond to those pain signals. 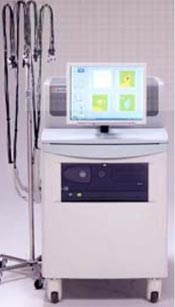 fNIRS machine. Credit: National Library of Medicine.
Other scientists are testing fNIRS for measuring dental pain, back pain, and migraine pain.
It should be noted, too, that fNIRS is not the only high-tech tool that holds promise for assessing pain. A recent report compared three imaging techniques used in monitoring pain in infants: NIRS, functional magnetic resonance imaging (fMRI), and electroencephalography (EEG). All of these tools look for clues to the patient’s pain levels by detecting changes in the brain. Although each tool had merit for monitoring pain, the researchers found that EEG had the most consistent results. The drawback with this technique is that electrodes cannot pinpoint the location of the pain signal in the brain to the same extent as fMRI or NIRS. The report authors noted that EEG and other imaging techniques are most effective when combined with existing pain-detection methods, such as monitoring changes in body movements, grimaces, and cries.
More research will help scientists determine how best to blend these high-tech tools with tried-and-true methods of pain assessment, offering patients the best chance at pain relief, both during surgery and beyond.
This research was funded in part by NIGMS under grants: 4R01GM104986-04 and 1R01GM122405-01A1.
Publicado por salud equitativa en 10:04