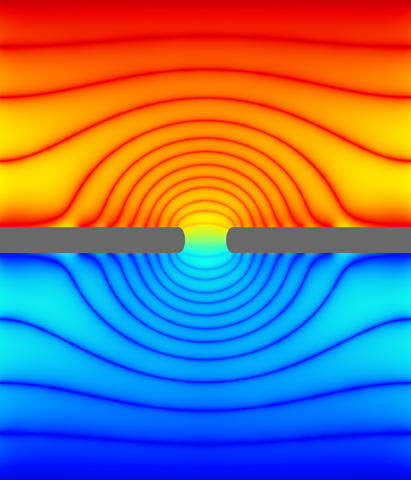 Tiny pores at a cell’s entryway act as miniature bouncers, letting in some electrically charged atoms—ions—but blocking others. Operating as exquisitely sensitive filters, these “ion channels” play a critical role in biological functions such as muscle contraction and the firing of brain cells. To rapidly transport the right ions through the cell membrane, the tiny channels rely on a complex interplay between the ions and surrounding molecules, particularly water, that have an affinity for the charged atoms. But these molecular processes have traditionally been difficult to model—and therefore to understand—using computers or artificial structures.
Now, researchers at the National Institute of Standards and Technology (NIST) and their colleagues have demonstrated that nanometer-scale pores etched into layers of graphene—atomically thin sheets of carbon renowned for their strength and conductivity—can provide a simple model for the complex operation of ion channels.