By Jesharee Sundaram, MBA
Protein and peptide microarrays, the emerging tools for proteomics and clinical assays, are high-throughput methods that track binding events and activities, and decide the function of proteins on a large scale. Microarrays find their place in epitope mapping and serodiagnostic applications. 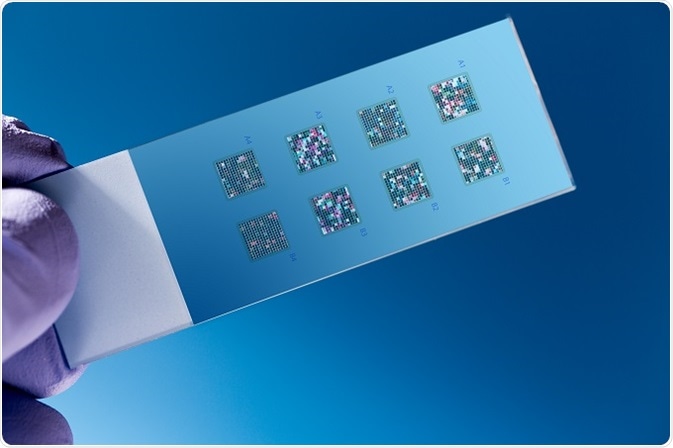 Various types of protein binding properties are detected by developing new assays to characterize protein-DNA and for protein–peptide interaction. Test ligands are directly or indirectly labeled with fluorescent dyes during the analysis of protein–protein and protein–lipid interactions.
Protein–small molecule interaction is used to discover new drug molecules and drug targets, while protein–glycan interaction finds the new role of protein glycosylation in mitochondrial protein function and localization. Since antibodies are widely used in proteomic studies, protein microarrays are helpful in profiling the monoclonal antibody specificity.
An important mechanism to directly control protein activity is the protein posttranslational modification (PTM). Protein application to phosphorylation finds the substrate specificity of the yeast kinome and discovers new tyrosine phosphorylation activity; ubiquitylation controls almost all sorts of cellular events in eukaryotes. Protein acetylation—histone acetylation and deacetylation promise to be important regulators of chromatin structure and transcription, while S-nitrosylation has effects on an extensive range of proteins involved in several cellular processes.

The well established “solid phase peptide synthesis” (SPPS), along with the comparatively easier fabrication of the corresponding microarrays, characterize peptide libraries as a very significant source of microarray applications. The idea of split-and-pool synthesis allowed creating large peptide libraries that consist of a huge number of molecules in very few short steps. A classic representative of peptide microarrays are kinase assays.
Knowledge-based peptide libraries
Knowledge-based libraries can be defined as libraries that are constructed using already known peptide sequences. These peptide libraries are mostly used in investigating proteins with known substrate or interacting partners. They can be constructed by using common combinatorial concepts such as positional scanning, alanine scanning, and amino acid deletion.
To discover peptide substrates with improved binding activity, positional-scanning libraries are used. They are constructed by the introduction of mutation within the known binding sites of the target protein at definite positions.
This can be used in alanine-scanning libraries in which the alanine residue replaces every amino acid in the peptide. It probes the contribution of each amino acid. Deletion libraries are designed by the systematic removal of flanking residues from the parent peptide. These libraries are used in determining the minimum sequence of a peptide needed for their normal activities to take place as usual. The routine investigation of amino acid residues that are essential for molecular interactions is done by the peptide arrays made of this kind of libraries.
Combinatorial libraries
When the target protein’s substrate is unknown, combinatorial peptide library-based microarrays are suitable. To reduce the synthesis of a large number of peptides, a semi-random combinatorial approach is used. This also helps in finding new peptide substrates and learning about proteins that are not known. Peptide microarrays are effective in categorizing known and unknown interactions between protein and peptide and offer possible tools to create peptide-based probes for functional annotation of RNAs in cells. Epigenetic modifications may have greater control on various human diseases.