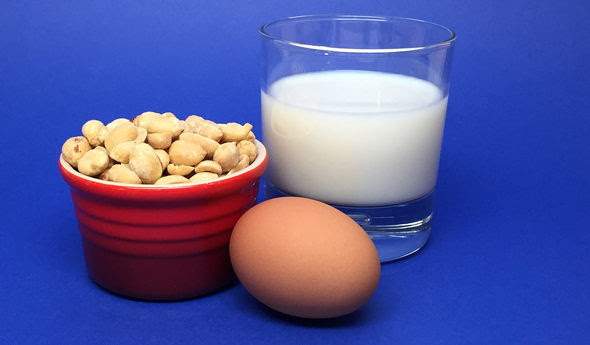 December 11, 2017
Combining a 16-week initial course of the medication omalizumab with oral immunotherapy (OIT) greatly improves the efficacy of OIT for children with allergies to multiple foods, new clinical trial findings show. After 36 weeks, more than 80 percent of children who received omalizumab and OIT could safely consume two-gram portions of at least two foods to which they were allergic, compared with only a third of children who received placebo and OIT.
Approximately 30 percent of people with food allergy are allergic to multiple foods. Results from the Phase 2 study, funded by the National Institute of Allergy and Infectious Diseases (NIAID), part of the National Institutes of Health, build on previous work suggesting that omalizumab, an injectable antibody drug approved to treat moderate to severe allergic asthma, can improve the safety and efficacy of OIT for allergies to a single food. Omalizumab blocks the activity of IgE, an immune system molecule central to the allergic response.
Researchers at the Stanford University School of Medicine enrolled 48 participants aged 4 to 15 years with confirmed allergy to multiple foods, including milk, egg, wheat, soy, sesame seeds, peanut or tree nuts. Participants were randomly assigned to receive omalizumab or placebo injections for the first 16 weeks of the study. At week eight, all participants began daily OIT, an investigational treatment that involves eating small, gradually increasing doses of an allergenic food. They continued OIT until week 36 of the study, at which point they underwent an oral food challenge. Among the 36 children who received omalizumab, 30 (83 percent) were able to eat at least two grams of two or more foods to which they were allergic, compared with only 4 out of 12 children (33 percent) who received placebo. Those who received omalizumab also experienced fewer adverse events from OIT during weeks 8 to 16 of the study.
The findings suggest the potential benefits of using omalizumab to safely and rapidly facilitate desensitization to multiple food allergens. Additional, larger studies will be needed to confirm and expand on these promising results. Neither OIT nor omalizumab (trade name Xolair) currently is approved for the treatment of food allergy.
ARTICLE:S Andorf et al. Anti-IgE treatment with oral immunotherapy in multifood allergic participants: a double-blind, randomized, controlled trial. The Lancet Gastroenterology & Hepatology DOI: 10.1016/S2468-1253(17)30392-8 (2017).
WHO:Amanda Rudman Spergel, M.D., medical officer in the Food Allergy, Atopic Dermatitis and Allergic Mechanisms Section in NIAID’s Division of Allergy, Immunology and Transplantation, is available to discuss the findings.
Publicado por salud equitativa en 9:53