Reported cases of Mycobacterium ulcerans disease (Buruli ulcer) have been increasing in southeastern Australia and spreading into new geographic areas. We analyzed 426 cases of M. ulcerans disease during January 1998–May 2017 in the established disease-endemic region of the Bellarine Peninsula and the emerging endemic region of the Mornington Peninsula. A total of 20.4% of cases patients had severe disease. Over time, there has been an increase in the number of cases managed per year and the proportion associated with severe disease. Risk factors associated with severe disease included age, time period (range of years of diagnosis), and location of lesions over a joint. We highlight the changing epidemiology and pathogenicity of M. ulcerans disease in Australia. Further research, including genomic studies of emergent strains with increased pathogenicity, is urgently needed to improve the understanding of this disease to facilitate implementation of effective public health measures to halt its spread.
Mycobacterium ulcerans causes a necrotizing disease of skin and soft tissue known as Bairnsdale or Daintree ulcer in Australia and Buruli ulcer worldwide. The pathogenesis of M. ulcerans is driven by production of mycolactone, a polyketide-derived macrolide that triggers apoptotic cell death (1). The clinical spectrum of M. ulcerans disease ranges from usually painless nodules or ulcers on the limbs, to more severe forms of the disease, including edematous lesions (2). More severe disease has major implications for patients in terms of increased illness and long-term deformities, more complicated and prolonged treatments, and increased treatment costs (3,4). The World Health Organization (WHO) classification system classifies M. ulcerans disease by severity: category 1 represents mild disease, and categories 2 and 3 represent more severe disease (5). The disease is classified as a WHO neglected tropical disease and has become a major public health issue in sub-Saharan Africa and Australia.
In the state of Victoria in Australia, M. ulcerans disease was first observed in the Bairnsdale District in the 1930s and is now established on the Bellarine Peninsula (6). In recent years, the epidemiology of M. ulcerans disease in southern Victoria has noticeably changed, with rapidly increasing numbers of human cases reported per year and expansion into new geographic areas, including the Mornington Peninsula, an adjacent area with previously few cases (7). The reasons for this expansion are unknown but might be related to changing climate, population expansion, human activities, or a complex zoonotic cycle involving possums (8,9).
Clinicians from Barwon Health, a tertiary hospital in Geelong, Victoria, Australia, which is adjacent to the Bellarine Peninsula, manage a large proportion of reported case-patients in Victoria (10), and have recently observed an increasing number of severe cases of M. ulcerans disease with devastating consequences for patients. If true, this increase might suggest emergence of more pathogenic strains of M. ulcerans among other factors putting humans at risk. Therefore, the purpose of this study was to describe the epidemiology and pathogenesis of severe M. ulcerans disease, assess risk factors for its development, and clarify the evolution of severe disease in this region. Our findings might facilitate development of effective public health interventions to reduce illness and the costs of this disease.

All patients with confirmed M. ulcerans disease managed at Barwon Health during January 1998–May 2017 were included in this study. A confirmed M. ulcerans case was defined as presence of a lesion clinically suggestive of M. ulcerans infection plus 1 of the following: culturing of M. ulcerans from a lesion, a positive PCR result for IS2404 (11) for swab or biopsy specimens from a lesion (performed at the Victorian Infectious Diseases Reference Laboratory, Melbourne, Victoria, Australia), or histopathologic findings for an excised lesion showing a necrotic ulcer and presence of acid-fast bacilli.

We prospectively collected clinical and demographic data by using Epi Info version 6 (Centers for Disease Control and Prevention, Atlanta, GA, USA). These data were information regarding age of patient; duration of symptoms at diagnosis; patient sex; geographic location of the case; concurrent conditions, such as diabetes mellitus and immune suppression; and type, site, and WHO category of lesions. We determined lesion size by measuring the extent of induration associated with the lesion with a ruler. 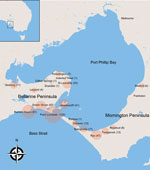 Figure 1. Locations (circles) of 426 cases of Mycobacterium ulcerans disease in Bellarine and Mornington Peninsulas, Barwon Health Cohort, Geelong, Victoria, Australia, January 1998–May 2017. Size of circles indicates number of cases, given...
We defined severe disease as any lesion classified as WHO category 2 or 3 at diagnosis. Using WHO criteria, we defined category 1 lesions as single lesions <5 cm in diameter, category 2 lesions as single lesions 5–15 cm in diameter, and category 3 lesions as single lesions >15 cm in diameter; multiple lesions, lesions at a critical site (eye, breast, genitalia), or osteomyelitis (5). Plaque lesions were firm, painless, elevated lesions >3 cm in diameter with ill-defined edges. Edematous lesions were diffuse and usually nonpitting swelling with ill-defined margins involving part or all of a limb or other body part. A lesion over a joint was defined as a lesion overlying 1 of the following large joints: ankle, elbow, knee, wrist, or shoulder. Immune suppression was defined as current treatment with immunosuppressive medication (e.g., prednisolone) or an active malignancy. We classified cases by geographic location as acquired from either of the disease-endemic areas of the Bellarine or Mornington Peninsulas (Figure 1). Calendar years were categorized as time periods (1998–2004, 2005–2010, and 2011–2017) and included as a variable in analyses to assess whether time periods were associated with disease severity.

We analyzed data by using SPSS version 24 (IBM, Armonk, NY, USA). We compared categorical variables by using the Fisher exact test, χ2 test, or χ2 test for trend and categorical and numerical variables by using the Independent Student t-test, as appropriate between groups. A p value <0.05 indicated statistically significant differences.
We constructed a logistic regression model to assess the association of variables with severe disease. We obtained crude odds ratios (ORs) by performing univariate analysis and then performed multivariable analysis for age and sex a priori and all other variables showing an association with severe disease by univariate analysis (assessed by p<0.20): geographic location, position of lesion over a joint, time period (range of years of diagnosis), and diabetes mellitus. We determined p values for assessing the strength of the association of each variable with disease severity, which were controlled for all other variables in the multivariable model, by using the likelihood ratio test. In addition, we individually compared the association of severe disease at 5 body sites (ankle, elbow, hand, forearm, and knee) with severe disease at all other body sites combined, except for these 5 sites, by using univariate logistic regression.

The study was approved by Barwon Health Human Research and Ethics Committee. All data were deidentified before analysis.

Figure 2. Proportion of severe and nonsevere cases of Mycobacterium ulcerans disease, Barwon Health Cohort, Geelong, Victoria, Australia, January 1998–May 2017.
A total of 446 case-patients with M. ulcerans disease were managed at Barwon Health during the study period. Twenty (4.5%) patients did not have WHO disease category recorded and were excluded. Thus, we included 426 case-patients in the study (Figure 1). We determined the number of cases included per calendar year stratified by disease severity (Figure 2).