Dangers of Noncritical Use of Historical Plague Data

Researchers have published several articles using historical data sets on plague epidemics using impressive digital databases that contain thousands of recorded outbreaks across Europe over the past several centuries. Through the digitization of preexisting data sets, scholars have unprecedented access to the historical record of plague occurrences. However, although these databases offer new research opportunities, noncritical use and reproduction of preexisting data sets can also limit our understanding of how infectious diseases evolved. Many scholars have performed investigations using Jean-Noël Biraben’s data, which contains information on mentions of plague from various kinds of sources, many of which were not cited. When scholars fail to apply source criticism or do not reflect on the content of the data they use, the reliability of their results becomes highly questionable. Researchers using these databases going forward need to verify and restrict content spatially and temporally, and historians should be encouraged to compile the work.
In an article by Jones and Nevell (1), the authors argue that improved access to historical data through digitization projects has benefited research in different scientific fields. However, they also point out that digitization has some unintended consequences. A key issue they identified is the loosening of the rigorous standards of evidence and interpretation scientific researchers typically demand within their own disciplines (1). Although scholars regularly reprimand colleagues for misrepresenting evidence and misusing data to make arguments that their material cannot support, such issues are less frequently addressed when data sets transcend the border from one scientific discipline to the next. This discrepancy poses a problem in an age of greater interdisciplinary research.
Here we focus on the most frequently used record of historical plague outbreaks in Europe. This information was originally compiled >40 years ago by Jean-Noël Biraben as part of his 2-volume work, Les hommes et la peste en France et dans les pays méditerranéens, which documents plague outbreaks from the Black Death (1347–1352) to the 19th century (2,3). Using a digitized version of this data set (https://zenodo.org/record/14973), which includes a limited number of outbreaks in northern Africa, authors have boasted impressive collections of documented European plague outbreaks: 6,929 plague outbreaks across Europe during 1347–1900 (4), 7,711 outbreaks across Europe and Asia during 1347–1900 (5), 5,559 outbreaks across Europe and northern Africa during 1347–1760 (6), and 6,656 outbreaks across Europe during 1347–1760 (7). In one of these studies, the Biraben data set was supplemented with additional outbreaks from Russia and Turkey gleaned from secondary literature (5).
Biraben had the ambition of constructing a pan-European overview of recurring plague outbreaks, and although his work at the time was an extraordinary feat of scholarship, a complete documentation of the occurrence of plague throughout Europe could not be adequately concluded by any single researcher. From a historian’s perspective, the most fundamental problem with Biraben’s data is the lack of systematic justification for the sources used and only cursory referencing of the original documents. However, this article is not meant to be a criticism of Biraben’s 1970s work but of the research published decades later by authors who interpreted Biraben’s results at face value. Scholars who have used this data set have not applied adequate source critique expected within the field of history, failing to pose basic questions concerning how the data were collected and what they represent. The 4 aforementioned studies (4–7) are not the only instances in which the Biraben data set were not used critically; in fact, there are many examples (8–13). However, Büntgen et al., Schmid et al., and Yue et al. are the first to use a digitized version of the data set, which not only causes specific problems but also sets a dangerous precedent for future research (4–7).

Noncritical Use of Historical Plague Databases

In 2012, Büntgen et al. presented the digitized version of the Biraben data set in a short correspondence piece (4). This publication reflected little on the limitations of the data. The only concerns Büntgen et al. addressed were the imprecise geographic descriptions that impeded exact localization and the annual resolution of the data that precluded tracking of outbreaks within the same year. However, through digitization and subsequent publication in a top-ranked journal, the 4-decade-old data set was imbued with a false aura of trustworthiness and the impression of being new historical research. Subsequently, others used the resulting database noncritically, in some cases not referencing the original Biraben data at all (6). The perpetual reuse of these data without structural effort to add new archival evidence has given the impression that our knowledge of historical plague outbreaks is saturated and, moreover, has obscured the fact that large amounts of innovative research on the spatiotemporal spread of plague has been conducted by others since the mid-1970s.

Figure 1. Plague outbreaks in Europe, 1347–1760. Map produced on the basis of data from Biraben (2,3). Map provided courtesy of Yue et al. Navigable rivers facilitated the spread...
These problems can be demonstrated through the maps that have been produced on the basis of Biraben’s data. Büntgen et al. provided a map in the introduction to the database (4), and a copy (Figure 1) was later included in an article on the supposed link between plague spread and navigable rivers (6). However, looking at the map, 2 problems surface immediately. First, France is depicted as the major epicenter of plague activity across 4 centuries, something even accepted as a face-value truth by some scholars (13). However, more than likely, the concentration of plague activity reflected nothing more than the fact that Biraben was French and had exceptional knowledge of the archives in France (14). Second, there are vast areas where no plague was recorded across the whole of the late-medieval and early modern periods. For example, hardly any recorded plague outbreaks appear in a period of 4 centuries in much of the Low Countries in western Europe. 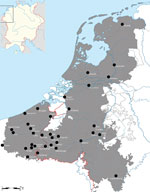 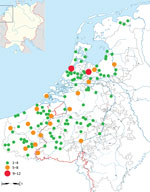 Figure 3. Plague mentions taken from archival sources, Low Countries, 1348–1500 (18). Inset shows location of the Low Countries in western Europe.
If we were to focus exclusively on the initial Black Death outbreak (1347–1352), this evidence would be in agreement with the literature of the mid-1970s. At that time, the consensus was that the Black Death somehow did not reach most parts of the Low Countries (2,15,16). Later this view was refuted, and proof that the Black Death was present in the Low Countries was established (17). In fact, a newly compiled data set of plague mentions shows that many regions of the Low Countries were hit by the Black Death (Figure 2) (18). When we add data of plague mentions across the entirety of the late Middle Ages (1349–1500), this map becomes filled to an even greater extent (Figure 3) (18), without even adding plague data from the 16th and 17th centuries, when many plagues, such as those in 1624‒1625 and 1635‒1636, hit almost every recordable locality of the Low Countries, both urban and rural (19). Biraben’s data set, therefore, is not only hindered by being outdated but also by having crucial gaps in spatial coverage, leaving out large parts of the Low Countries, Denmark, Scotland, Ireland, and Central Europe (20). Even countries well known in the literature for having experienced numerous plagues of exceptional severity across the Middle Ages and during the early modern period, such as Italy (14,21), have very few plague markers on the maps produced with Biraben’s data.

In the examples we mention, 3 transgressions have been attributed to the scholars using the Biraben data set. First, reflection on the data collection process has been improper; second, what the data represent has not been recognized; and third, critique of the original sources has been inadequate. We argued that a critical consideration of any of these 3 elements would have led to the conclusion that the data set could not have been used at face value.

Figure 5. Plague incidences in Europe, 1347–1900. Graph produced on the basis of data from Biraben (2,3). Graph provided courtesy of Schmid BV et al. Climate-driven introduction of the...

Figure 7. Comparison of Biraben’s and Cohn’s historical plague data sets. Biraben’s data set included references to plague in various types of documents from Italy, Iberia, France, the Low Countries, and the British...
We suggest 3 necessary steps to take to rectify some of the mistakes made with the use of digital databases of plague, which were often constructed by using Biraben’s data. First, if we are going to pursue the Biraben database, we at least need to check his plague references with other forms of evidence rather than taking him at his word. Historians have done this in previous years with care by using only a select geographic sample of Biraben’s evidence and comparing the data to other quantifiable indexes, such as the temporal distribution of will production (Figure 7) (39).
Second, scholars looking to test certain hypotheses, such as the effect of navigable rivers, commercialization, trade routes, or climatic fluctuations, should do so by using a historical plague data set of a much more restricted geographic or temporal scope to limit problems such as the inequalities in availability of source material or scholarly attention. We need to escape the confines of excessively localized and excessively macro scales and, instead, reap the benefits of a more workable historical laboratory at a regional level (40). This restriction method is similar to how epidemiologists try to control for confounders by limiting their data to a specific group of persons sharing a specific characteristic. A way of implementing this in practice is by moving away from using data sets that consolidate different kinds of references to plague through different kinds of evidence (often without justification) and moving toward using data sets that can show differences in plague characteristics by comparing the same type of source material, a method that offers greater control. For example, by using only data from church burial records from the 16th and 17th centuries over many parts of Europe, a systemic comparison can be performed between urban and rural localities over time and with regard to plague severity, seasonality, pervasiveness, and various kinds of selectivity (14,18). Epidemiologic information on plagues is better provided by using this approach than by using a random set of diverse manuscripts that may or may not refer to plague.
Third, it is clear that new databases of plague incidence have to be compiled by historians using data sets besides Biraben’s. Given that this task is laborious and time-consuming, incentives are needed for historians to compile this information. One incentive could be the formal inclusion of trained medieval historians in large interdisciplinary scientific teams interested in charting and explaining the spread of plague.
Mr. Roosen is a doctoral student researcher working at Utrecht University (Utrecht, the Netherlands) under the supervision of Bas van Bavel, and Dr. Curtis is an assistant professor at Leiden University (Leiden, the Netherlands). Both authors have research interests in the epidemiologic characteristics of infectious diseases in the past.

This research was funded by the Netherlands Organisation for Scientific Research in the Innovative Research Incentives Scheme (grant no. 275-53-014) and the European Research Council with an Advanced Grant (Bas van Bavel, grant no. 339647).