By Dr Ananya Mandal, MD,December 11, 2017
Canola oil has been marketed as a healthy cooking oil choice because of the low levels of saturated fats that is seen in it. Now a new study has revealed that consumption of canola oil could be linked to worsening of memory functions and learning ability in patients with Alzheimer’s disease.
The study also shows that canola oil consumption could increase the risk of formation of plaques within the brain that is the signature feature of Alzheimer’s disease and also lead to weight gain. The study titled, “Effect of canola oil consumption on memory, synapse and neuropathology in the triple transgenic mouse model of Alzheimer’s disease” was published in the latest issue of the journal Scientific Reports. 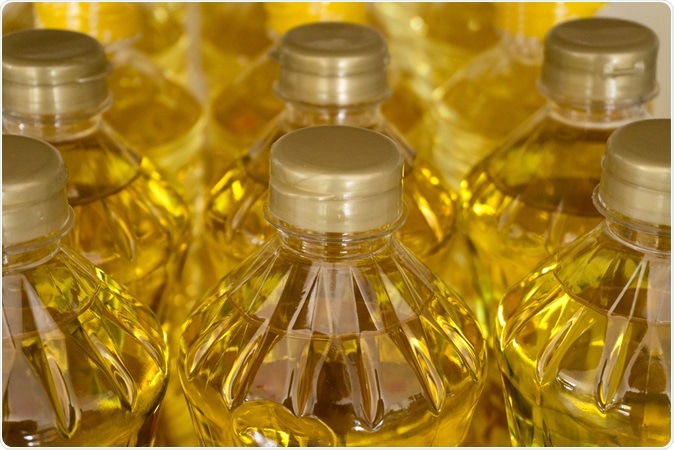 Canolo oil bottles. Image Credit: natthawut ngoensanthia / Shutterstock
This is the first study that shows that consumption of canola oil is not a beneficial choice for the brain. Senior study investigator Professor Domenico Praticò, Professor in the Departments of Pharmacology and Microbiology and director of the Alzheimer's Center at Lewis Katz School of Medicine at Temple University (LKSOM) in Philadelphia, explained that canola oil has been advertised as being healthy and is easily a more “appealing” choice because it is cheaper than other vegetable oils. There have been little or no studies that link its effects on the brain Praticò said.
For this study the team of researchers used a laboratory mice model that was specifically designed to mimic Alzheimer's in humans. These rodents would show no symptoms of memory loss and learning problems early in life and slowly progress to symptoms of Alzheimer’s as they aged. They were classified into two groups at six months of age before they showed any signs of memory loss. One group was given normal diet and the other group received diet supplemented with about two tablespoons of canola oil daily. They were all assessed after a year.

It was seen that canola oil consumption increased body weight significantly over normal diet. Working memory and learning abilities also were reduced in the canola oil group. To test this scientists usually use a set of mazes that the mice need to navigate through. The brains of all the mice were studied and it was noted that amyloid beta 1-40 levels were lower with canola oil consumption. This peptide is known to be protective against Alzheimer’s disease. This group of animals also developed amyloid plaques in the brain that is a hallmark of Alzheimer’s disease. The injuries in the brain were extensive upon examination.
Dr Praticò said, “Based on the evidence from this study, canola oil should not be thought of as being equivalent to oils with proven health benefits.” He explained that they are planning longer studies to check upon the extent of harm caused by the oil and also its effects on other types of dementia and memory loss.
Elisabetta Lauretti, a graduate student in Dr. Pratico’s laboratory at LKSOM and co-author on the new study had earlier worked with him to study the effect of olive oil on Alzheimer’s disease in the same laboratory. This had shown that olive oil was beneficial in terms of brain health. That study too was published earlier this year.
Source:
https://www.nature.com/articles/s41598-017-17373
Publicado por salud equitativa en 11:04