Sponsored by Andor Technology Ltd.Jun 22 2017
How molecules behave can seriously implicate how various biochemical processes and individual cell mechanisms work, which influences one’s behavior as a human. A technique known as single molecule detection can be used to probe the behavior of molecules with unparalled detail. 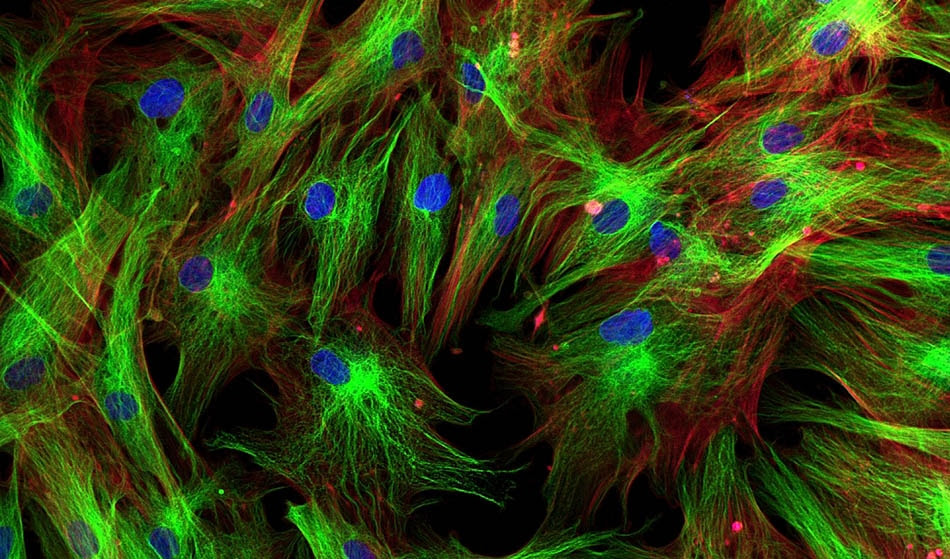 Microscopy is now widely used across many scientific disciplines, none moreso than in the biological sciences. Microscopy has also become a necessary and useful tool for understanding how biological mechanisms are important within the life sciences. Microscopy is also advancing in many other scientific fields, including in nanotechnology, materials science and engineering, to name a few.

Request more information about single-molecule detection technologies from Andor
Fluorescence microscopy has become a fundamental technique in life science research. It is a selective technique, as it enables scientists to isolate and examine individual biological features which have been labelled with a fluorescent dye, also known as a marker. The use of a marker allows the area bound to the dye to become illuminated under the microscope, leaving other regions dark, which enables a specific region to be examined rather than the whole sample.
However, fluorescence microscopy does have its disadvantages also, with the main one being that it is limited by the diffraction of light. The limit is above the resolution required to image, and differentiate between, individual molecules. In simple terms, the limit restricts the amount of detail that can be imaged with standard objectives.
This major disadvantage means that standard fluorescence microscopy cannot be used to image individual cells or individual molecules. Because an organisms behavior is defined by its behavior and characterstics at the molecular level, techniques that can image at this scale are fundamental to improving our knowledge about the behavior in humans and animals.

Single Molecule Detection may be the Answer

When a higher resolution is required, scientists generally turn to confocal and total internal reflectance fluorescence (TIRF) microscopy techniques, and will turn to super-resolution techniques, such as structured illumination microscopy (SIM) and stimulated emission depletion (STED) microscopy, if more detail is required in the image. All of which are a relatively new group of microscopy techniques that allow the user to stretch the resolution boundaries of conventional fluorescence microscopes.
However, these techniques still have their drawbacks. Despite providing an enhanced resolution, the techniques still require multiple molecules to be stimulated simultaneously. The information gathered from imaging a fluorophore or a single molecule is much greater than the bulk measurements obtained from imaging many molecules. This is due to single molecule imaging providing information on the molecular properties and the environement of each individual molecules. As such, the imaging of single molecules has garnered interest in multiple research areas as it allows scientists to study the molecular properties that are otherwise hidden in large molecular groups.
As Professor David Walt of Tufts University says:

Single cells are the fundamental units of biology. Just as single cells have differences when you begin to look at the levels of proteins in them or the sequence of DNA in ostensibly identical cells, when you look at single molecules, you also see a distribution of behaviors.

Various techniques have now emerged that allow for single molecule detection. As an example, Morisaki et al. used nascent chain tracking (NCT) to study the individual mRNA protein synthesis dynamics and is the first time this has been achieved in-vivo.

Many techniques could utilise single molecule detection, including laser scanning confocal microscopy, TIRF, wide-field microscopy, near-field scanning optical microscopy (NSOM) and super-resolution techniques such as SIM and STED.
The basic principle and mechanism is as follows: single molecule detection through fluorescence microscopy is limited by the photons emitted from the fluorophore. Flourescent molecules which become activated need to be separated by a distance greater than the Abbe diffraction limit. This allows parallel recording of individual emitters, with each having their own distinct set of coordinates.
The detector collects image centroids of each of the individual molecules and the coordinates of these molecules can be determined by the number of emitted photons. A readout laser collects images of the emitting molecules, until they re-enter a darkened state through spontaneous processes. By repeating this process, for multiple cycles, it enables the position of the fluorophores to be deduced and an image to be constructed at the end of the experiment.

Take the Next Step…

One major technological development for life science imaging was the implementation of low-light level electron multiplying charge-coupled device (EMCCD) camera systems. However, Andor CCD cameras are known to be the gold standard for single molecule detection.
The iXon Life camera has been exclusively designed for fluorescence microscopy and gets the best out of EMCCD technology across all critical performance specs and parameters.
The accelerated readout rates, combined with ‘Optically Centered Crop Mode’, mean that dynamic single molecule processes can be easily characterised. The 13μm pixel of the 888 model provides superb single molecule resolving capability at the diffraction limit, whilst preserving the optical photon collection efficiency.