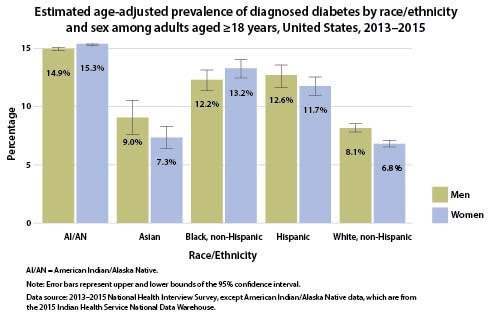 More than 100 million U.S. adults are now living with diabetes or prediabetes, according to a new report released today by the Centers for Disease Control and Prevention (CDC). The report finds that as of 2015, 30.3 million Americans – 9.4 percent of the U.S. population –have diabetes. Another 84.1 million have prediabetes, a condition that if not treated often leads to type 2 diabetes within five years.

For Immediate Release: Weekday, July 18, 2017
Contact: Media Relations
(404) 639-3286
More than 100 million U.S. adults are now living with diabetes or prediabetes, according to a new report released today by the Centers for Disease Control and Prevention (CDC). The report finds that as of 2015, 30.3 million Americans – 9.4 percent of the U.S. population –have diabetes. Another 84.1 million have prediabetes, a condition that if not treated often leads to type 2 diabetes within five years.

The report confirms that the rate of new diabetes diagnoses remains steady. However, the disease continues to represent a growing health problem: Diabetes was the seventh leading cause of death in the U.S. in 2015. The report also includes county-level data for the first time, and shows that some areas of the country bear a heavier diabetes burden than others.
“Although these findings reveal some progress in diabetes management and prevention, there are still too many Americans with diabetes and prediabetes,” said CDC Director Brenda Fitzgerald, M.D. “More than a third of U.S. adults have prediabetes, and the majority don’t know it. Now, more than ever, we must step up our efforts to reduce the burden of this serious disease.”
Diabetes is a serious disease that can often be managed through physical activity, diet, and the appropriate use of insulin and other medications to control blood sugar levels. People with diabetes are at increased risk of serious health complications including premature death, vision loss, heart disease, stroke, kidney failure, and amputation of toes, feet, or legs.
The National Diabetes Statistics Report, released approximately every two years, provides information on diabetes prevalence and incidence, prediabetes, risk factors for complications, acute and long-term complications, mortality, and costs in the U.S.
Key findings from the National Diabetes Statistics Report
The report finds that:
Rates of diagnosed diabetes were higher among American Indians/Alaska Natives (15.1 percent), non-Hispanic blacks (12.7 percent), and Hispanics (12.1 percent), compared to Asians (8.0 percent) and non-Hispanic whites (7.4 percent).
Other differences include:
“Consistent with previous trends, our research shows that diabetes cases are still increasing, although not as quickly as in previous years,” said Ann Albright, Ph.D., R.D., director of CDC’s Division of Diabetes Translation. “Diabetes is a contributing factor to so many other serious health conditions. By addressing diabetes, we limit other health problems such as heart disease, stroke, nerve and kidney diseases, and vision loss.”
CDC partnerships to prevent diabetes
To reduce the impact of prediabetes and type 2 diabetes, CDC established the National Diabetes Prevention Program (National DPP), which provides the framework for type 2 diabetes prevention efforts in the U.S.
Based on the landmark Diabetes Prevention Program research findings funded by the National Institutes of Health (NIH), the National DPP includes an evidence-based, year-long, behavior change program to improve eating habits and increase physical activity to lose a modest amount of weight and significantly reduce the risk of type 2 diabetes.
To raise awareness and help people with prediabetes know where they stand and how to prevent type 2 diabetes, CDC, the American Diabetes Association (ADA), and the American Medical Association (AMA), partnered with the Ad Council to launch the first national public service advertising (PSA) campaign about prediabetes. These humorous PSAs in English and Spanish encourage people to take a short online test at DoIHavePrediabetes.org to learn their risk.
To prevent serious and costly diabetes complications, states are working with CDC to improve access to diabetes self-management education (DSME), with an emphasis on DSME programs that meet national quality standards. Additionally, CDC and NIH’s Natural Experiments for Translation in Diabetes (NEXT-D) study evaluates existing data to determine whether diabetes prevention and control interventions and policies are effective under real-life conditions.
For more information about diabetes and CDC’s diabetes prevention efforts, visit http://www.cdc.gov/diabetes.
Publicado por salud equitativa en 7:35