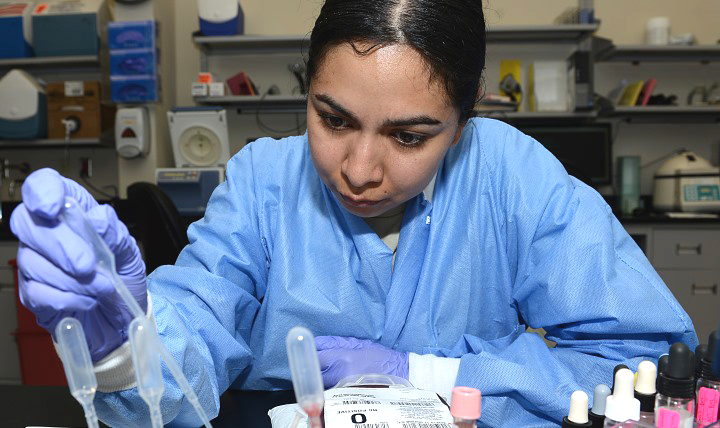 
A program that keeps the Military Health System on the leading edge of medical innovation, and benefits more than 128,000 patients in the system, will continue. The Secretary of Defense has renewed the Non-FDA Approved Laboratory Developed Tests Demonstration Project begun in September 2014.
“These tests are developed within a lab, usually for sole use within that lab,” said Dr. Jim Black, medical director for the Defense Health Agency. The Food and Drug Administration has discretion in its oversight role in approving lab-developed tests, allowing some to be used without going through the agency’s formal approval process, he said.
Hospitals and labs, including those run by the military, can create and use these tests without seeking the FDA’s approval. The Military Health System uses the Laboratory Joint Working Group, a body of clinical and lab experts from all of the military services, to prioritize and review a test. The criteria of that evaluation are based on a hierarchy of reliable evidence of proven medical effectiveness (such as scientifically valid data and information published in refereed medical and scientific literature), as well as TRICARE’s rules involving rare diseases. The group then forwards its recommendation to the director of the Defense Health Agency for final approval for use. The sticking point came in care given outside of military treatment facilities for TRICARE’s beneficiaries. TRICARE requires that all tests it covers meet FDA approval, automatically eliminating many lab-developed tests from even being considered.
“As the whole field of genomic medicine and genetic testing has grown, the difficulty TRICARE faced was that these tests were increasingly being used in the practice of medicine,” said Black. “But without FDA approval and clearance, TRICARE could not cover them.”
The demonstration allows TRICARE to evaluate these tests for safety and value and approve their use. More than 100 tests have been given the green light. Those include tests for diagnosing cancers as well as blood or clotting disorders, genetic diseases or syndromes, and neurological conditions. Some tests are only for specific conditions or rare diseases.
Military hospitals already have their own lab-developed tests. The tests are similar to, but not exactly the same as, those covered under this TRICARE demonstration program. Army Lt. Col. George Leonard, a pathologist in charge of medical oversight for the laboratory at Madigan Army Medical Center at Joint Base Lewis-McChord in Washington state, said they have several tests that help them respond more quickly when treating patients.
“For example, we developed an assay for Bordetella pertussis, better known as whooping cough,” said Leonard. “This allowed us to diagnose Bordetella pertussis within hours, instead of culture testing, which takes days. If you have something that is potentially very contagious and you can’t give a diagnosis until days later, you’ve really gotten yourself behind the curve when it comes to preventive medicine or epidemiologic control of that organism.”
Leonard pointed out that while a patient is being diagnosed over a number of days, disease could spread to a larger community. If caution dictated, everyone who may have come in contact with a patient being tested would be quarantined for several days under the old test. That’s a tremendous amount of lost work and productivity if the test came back negative. The lab-developed tests also help avoid misdiagnosing a disease.
“Bordetella parapertussis (a closely related to but a distinct species from Bordetella pertussis) might present almost the same clinically,” he said. “While culture may only detect pertussis, our assay can tell us if a patient has a related disorder so we can treat them correctly.”
Leonard also wanted to dispel any perception that these lab-developed tests, while not FDA-approved, are not up to par. “We apply the same rigorous standards for accuracy and validity for lab-developed tests as the FDA approved ones. Our tests give accurate and reproducible results,” he said.
Black said these types of testing, under the demonstration project and in use at military facilities, are just one more tool the Military Health System uses to keep up with the rapid pace of innovation in health care.
“The demonstration allowed us to develop a process to evaluate these tests for safety and efficacy,” said Black. “Using lab-developed tests, we’ve made great strides in care.”


One size no longer fits all: MHS’ approach to individualized medicine

Military Health System experts discussed the importance of individualized approach to prevention and treatment, and the need for MHS and Uniformed Services University of Health Sciences to pave the way
Recommended Content:
Preventive Health | Medical Research and Development

Reduction of 3 TRICARE Regions to 2

As 2016 comes to an end, it is important to reflect on the goals, accomplishments and events that shaped DHA this year
Recommended Content:
MHS GENESIS | TRICARE Health Program

TRICARE and the Affordable Care Act

MEC is the "minimum essential coverage" that you're required to have by the Affordable Care Act.
Recommended Content:
TRICARE Health Program

A decade of progress in Women’s health, cancer research