For Many, Friends Are Key to Happiness in Old Age: MedlinePlus Health News

For Many, Friends Are Key to Happiness in Old Age: MedlinePlus Health News

For Many, Friends Are Key to Happiness in Old Age

These relationships may even outstrip family when it comes to well-being, study suggests 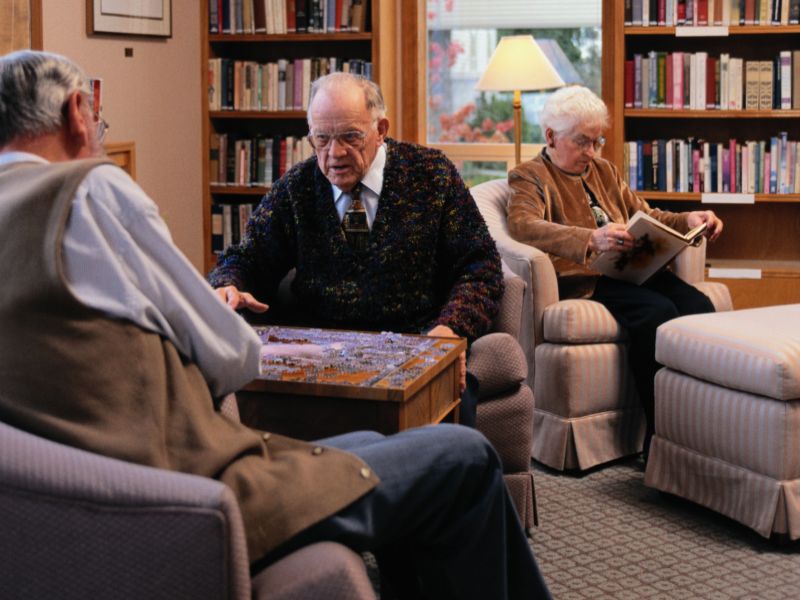 THURSDAY, July 29, 2017 (HealthDay News) -- As you age, the friends you keep wield an ever-greater impact on your health and sense of happiness, new research reveals.
They may even outstrip family in terms of the sway they have over you, according to the pair of new studies.
Lead investigator William Chopik cited several reasons why friendships might pack a bigger punch than blood relationships when it comes to influencing health and well-being.
"We spend leisure time with friends. We freely choose to continue relationships with friends," said Chopik, an assistant professor of psychology at Michigan State University.
If the friendships last until older adulthood, "clearly these are good friendships," he added.
"As we age, we prune away at some of the friendships that are more superficial and acquaintance-like," he said. That means that as older adults, "we're left with the ones that are deeper and make us happy," Chopik explained.
In contrast, he said, family interactions can be very serious or monotonous, and those relationships are harder to leave.
The study findings stem from two surveys that, in total, asked almost 280,000 people about their relationships, their happiness and their health.
First, Chopik reviewed responses regarding thoughts on friendship, family, health, happiness and satisfaction that were collected by the World Values Survey. More than 271,000 males and females across almost 100 countries participated, ranging in age from 15 to 99.
Chopik found that people who placed more importance on friendship and family tended to say they were happier, more satisfied and healthier than those who didn't.
But older participants indicated that only their friendships loomed large as reliably strong predictors of how happy and healthy they felt.
This rising impact of friendship occurs gradually, Chopik said. "I would say the changes begin around age 30 (or) 40, and then peak for ages 50 to 60, and remain large throughout the rest of life," he said.
A second smaller survey involved roughly 7,500 American seniors, average age 68, enrolled in the Health And Retirement Study.
The participants were asked about the support and/or strain they experienced with their friends and family members, including spouses, children and other immediate family. All were also asked to indicate how "satisfied" they felt, as an indicator of overall well-being.
The onset of eight chronic health issues was also noted. Those included high blood pressure, diabetes, cancer, lung disease, heart disease, mental health concerns, arthritis/rheumatism and stroke.
Chopik found that friendships had a clear impact -- both positive and negative -- on a senior's health and satisfaction levels. Among family members, only a spouse or child exerted a similar influence.
However, only friendships -- specifically, strained friendships -- appeared to be associated with an increased risk for chronic illness, the study found.
While the findings aren't conclusive, they suggest that good friendships are a worthwhile investment, the researchers said.
Jamila Bookwala, a professor of psychology at Lafayette College in Easton, Pa., expressed little surprise with the findings.
"Increasingly, researchers have found that friendships are key to health and well-being in general and especially as we age," she said.
"My research has shown, for example, that having a friend as a confidant is key to better well-being at a time of the death of a spouse," Bookwala said. "Family members as confidants did not have the same protective effect."
Why? Friendship is a choice, Bookwala agreed, while family is not. And that choice conveys a sense of "personal control," which is important for health, she said.
In addition, friends tend to be of a similar age. "Thus, friends are more likely to share experiences and similar life challenges," said Bookwala.
"This can mean receiving more acceptance and understanding from friends, and also advice that is more relatable, meaningful, and effective," she said. This is especially true for older adults whose relatives are likely younger, she added.
The findings were published in the June issue of Personal Relationships.
SOURCES: William Chopik, Ph.D., assistant professor, psychology, Michigan State University, East Lansing, Mich.; Jamila Bookwala, Ph.D., professor, psychology, dean of curriculum and research, Lafayette College, Easton, Pa.; June 2017 Personal Relationships
HealthDay
Copyright (c) 2017 HealthDay. All rights reserved.
News stories are written and provided by HealthDay and do not reflect federal policy, the views of MedlinePlus, the National Library of Medicine, the National Institutes of Health, or the U.S. Department of Health and Human Services.