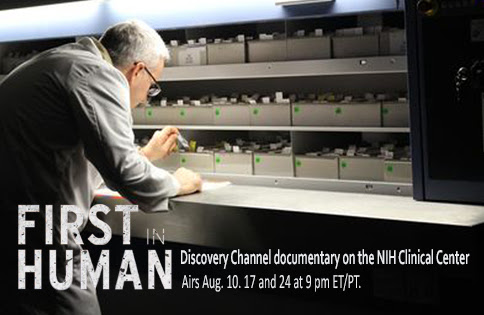 The National Institutes of Health is proud to announce the premiere of Discovery’s three-part documentary,First in Human, which features the real-life experiences of patients, their families, doctors, researchers, staff, and caregivers at the NIH Clinical Center, the nation’s largest hospital devoted entirely to clinical research. Airing on three sequential Thursday evenings on August 10, 17, and 24, at 9:00 p.m. ET/PT on Discovery, First in Human is narrated and executive produced by Emmy®, Golden Globe®, and Critics Choice® winning actor Jim Parsons (The Big Bang Theory, Hidden Figures), in collaboration withJohn Hoffman (Weight of the Nation, Sleepless in America).
For more than a year, Discovery was embedded in the NIH Clinical Center capturing the challenges faced in developing cutting edge science to diagnose and treat diseases. Showcasing the innovative work taking place within the NIH Clinical Center, the documentary provides an in-depth look at the reality of experimental medicine, and the courageous volunteer patients who take part in the first-in-human trials to test safety and effectiveness.
Since opening in 1953, more than 500,000 volunteer patients from all over the world have come through the doors of the NIH Clinical Center to seek treatment from the nation’s top scientists, doctors, and caregivers, often when no other options remain. NIH Clinical Center successes include pioneering the cure of cancerous solid tumors with chemotherapy, the use of nitroglycerin to treat heart attacks, identifying a genetic component in schizophrenia, conducting the first successful replacement of a mitral valve to treat heart disease, and the creation of blood tests to identify AIDS and hepatitis.
There are upcoming opportunities to engage with us on social media using #FirstinHuman to help educate the public about how biomedical discoveries make it from the lab to the bedside. In addition to live tweeting each of the three episodes on August 10, 17 and 24, NIH will host a twitter chat on August 9 from 1-2 pm ET with NIH Director Dr. Francis Collins, and Clinical Center CEO Dr. James Gilman.
For more information on First in Human visit: https://www.nih.gov/health-information/first-human
Publicado por salud equitativa en 6:32