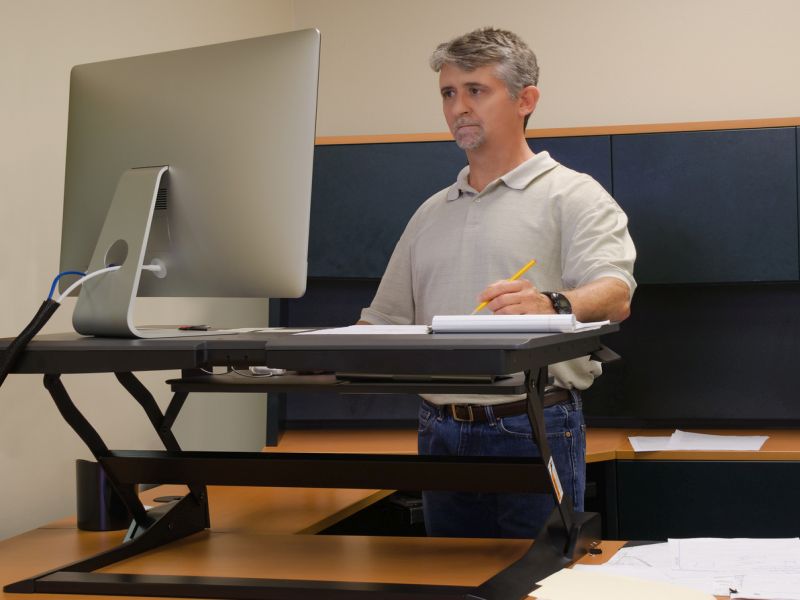 FRIDAY, July 21, 2017 (HealthDay News) -- Companies needn't worry that job performance will suffer when employees use "active" workstations that come with potentially distracting treadmills, bikes or ellipticals.
New research shows that most of the thinking skills needed to get through a typical workday are "not impaired while working on the active workstation," said study author Brandon Alderman.
The evidence on active desks has been mixed, he said. Before the new study, "we knew there was a slight impairment in typing speed and mouse use when using the active workstations," he acknowledged.
The question was whether active workstations interfered with thinking clearly while on the job.
Alderman is vice chair of kinesiology and health at Rutgers University in New Brunswick, N.J.
His team looked at 58 workers in all, including 26 people aged 31 to 65 and 32 workers aged 18 to 28.
Alderman tested the workers on such tasks as resisting distraction, multitasking, the ability to hold multiple concepts in the mind at one time, and planning ability.
During each 50-minute session of low-intensity walking, the workers got in about 4,500 steps, nearly half of the 10,000 steps a day often recommended for good health. "They walked at a very low [self-selected] speed," Alderman explained.
While most tasks remained unaffected by walking on the active workstation, there was a slight reduction in performance on a task involving planning ability. And the middle-aged adults took longer to plan for some of the more difficult tasks when they walked, compared to when they sat.
Overall, however, the researchers concluded that "active workstations may be an effective way to reduce the public health threat of sedentary behavior without negatively affecting executive function."
Alderman's team used TrekDesk, which was donated by the company. The study received no industry funding and the authors have no ties to the company. Prices for active workstations vary, but the TrekDesk sells for about $550 and attaches to many types of treadmills, which can range from another $600 and up.
Active workstations are not meant to take the place of regular cardiovascular workouts, experts concur, but to break up the long hours of sitting, which are linked to poor health and weight gain. According to background information in the study, some experts have found the active workstations could boost energy expenditure by about 100 calories an hour, and that might lead to weight loss.
The findings are not surprising to Gregory Garrett, a Ph.D. candidate at Texas A&M University. He published a study in 2016 that found productivity increased among call center workers who used standing desks. The desks can be used to sit or stand while working. The ones he studied did not have treadmills, bikes or ellipticals attached.
In the past decade, Garrett said, there have been concerns about whether moving from sitting to standing would impair job performance.
"I think we are finding more and more studies are showing this is not the case," he noted.
In Garrett's study of 167 call center workers, those who used the standing desks were 45 percent more productive on a daily basis compared to those who stayed seated. The longer standing desks were used, the more productive the workers were.
Alderman did note that an active workstation does take some getting used to for employees. He has this advice for new users: "Make sure you set goals and break up the amount of time sitting." Workers can build up to more time moving gradually.
Garrett said the treadmill workstations have some issues, with people potentially falling. He prefers active workstations attached to bikes or elliptical trainers.
Another expert who has published research on active workstations agreed there is a learning curve.
"In our study [with the specific tasks that employees had to perform] it took many weeks to learn how to work with a treadmill workstation as well as in a conventional desk," said Avner Ben-Ner, a professor in the University of Minnesota's Center for Human Resources and Labor Studies. "So for a while, on average almost half a year, work performance declined, but then it picked up and eventually exceeded the pre-study level."
But, "the benefits of walking, even a little, are substantial, particularly for those who are sedentary and do no or little exercise," Ben-Ner said.
The new study was published recently in the journal Medicine & Science in Sports & Exercise.
SOURCES: Brandon Alderman, Ph.D., associate professor and vice chair, kinesiology and health, Rutgers University, New Brunswick, N.J.; Gregory Garrett, doctoral candidate, Texas A&M University, College Station; Avner Ben-Ner, Ph.D., professor, Center for Human Resources and Labor Studies, University of Minnesota, Minneapolis; May 2017, Medicine & Science in Sports & Exercise
HealthDay
Copyright (c) 2017 HealthDay. All rights reserved.
News stories are written and provided by HealthDay and do not reflect federal policy, the views of MedlinePlus, the National Library of Medicine, the National Institutes of Health, or the U.S. Department of Health and Human Services.