Don’t divorce: powerful arguments for saving and revitalizing your marriage

Don’t divorce: powerful arguments for saving and revitalizing your marriage

Ruth was married to Joel. Sylvia was married to Christopher. The two couples were the best of friends until Sylvia and Joel had an affair. Soon after Ruth discovered the betrayal of her husband of 15 years, Joel

“took his suitcases to his parents’ house. Still living on the property where he grew up, they had a separate-entrance guesthouse that Joel took over…Joel lived in his folks’ guest house rent-free for three years.
“Seven years after the two divorces, Sylvia and Joel finally did get married.”

Quite understandably, Ruth suffered from “deep depression” while “Christopher carried a hatred for both his ex-wife and former friend.”
But although Joel’s parents “were shocked by their son’s disgraceful behavior” they “felt an obligation to support him.”
Thus concludes one of dozens of true stories of marital abandonment in Dr. Diane Medved’s latest prescription, Don’t Divorce: Powerful Arguments for Saving and Revitalizing Your Marriage.
A clinical psychologist who has worked with troubled marriages for over two decades, Medved takes a no-nonsense, clear-eyed approach to the “divorce momentum” (her phrase) that characterizes our age. Her book is a welcome respite from the anthology of divorce apologetics lining the shelves of most public libraries (and many offices of marriage therapists) in America today. 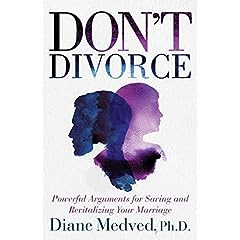 Don't Divorce: Powerful Arguments for Saving and Revitalizing Your Marriage | By Diane Medved | Regnery, Mar 2017 | Hardcover 256 pages | ISBN: 1621575217
The work is also unusual in that it is not primarily a broader philosophical, religious, or data-driven case against divorce (although it includes elements of each). Instead, Medved speaks in her capacity as a clinician to two subsets of people in non-abusive marriages: those who are seriously contemplating divorce but who remain open to the idea of putting it off, and those whose spouses are threatening divorce.

“If you’re determined to leave…you may behave civilly, but you have erected a cruel barrier to the pain and hurt of the one left behind. The spouse executing a ‘chop and run’ divorce has severed the emotional connection that once bound the family. If that’s you…I’ve spent much of my career helping the one you’ve emotionally abandoned.”

Medved’s attempt to reach spouses who would “chop and run,” is a worthy effort and much-needed resource not only for spouses themselves but for advocates who have their true well-being in mind.
Families, friends, clergy, and therapists can exhibit authentic care by holding accountable a son or daughter, a parent, a best friend, a sibling, or a client who has gone astray. To do so means resisting the urge to look away from, or justify, the narcissistic behavior at the core of so many divorces today.
The book is chock-full of reasons to avoid what one researcher calls the “bystander response” to divorce:

“Relatives and friends who don’t want to get involved in your marriage may just step back and do nothing instead of intervening. Siblings, friends, and families of a divorcing couple offer the excuse that a marriage is private.”

In a culture where steps taken to ensure fidelity in one’s own marriage may be considered “sexist,” the task for those who wish to rehabilitate lifelong, monogamous marriage may seem a steep uphill climb – and it surely is.
But one concrete step each of us can take is to reach out to errant spouses in our own lives, in a spirit of true charity to every person involved. We can help him or her embrace the difficult but urgent (and entirely possible) task of repentance, marital reconciliation, and family renewal.
To employ a Catholic buzzword: we can accompany our friend back to the truth of his or her vocation.
Alas, as Medved correctly observes in a section on the high likelihood of peer pressure to leave a spouse for any reason at all (often exerted through Facebook and other social media): “In a culture that overwhelmingly accepts divorce, you’ll have to seek out advocates for the tough job of rebuilding…Beware well-meaning friends!”
The chapter entitled, “The Ruinous Ripples of Divorce,” in particular, is a must-read for anyone still unconvinced of the profound influence of one’s social support network on the decision to keep or break a marriage vow.
From my own perspective as a developmental psychologist who studies marital abandonment, especially as treated within the Catholic Church, Don’t Divorce is limited in one key respect that should give Catholic readers (especially clergy and parish ministry leaders) - and others who hold the marriage bond as binding - pause.
The main issue is the theological and ontological “lens” through which the matter of divorce – and perhaps more importantly the nature of marriage itself – is viewed. Medved’s perspective, that of an observant Jew, is similar to that of many Protestant denominations. Marriage is a sacred covenant ordained and sustained by God, which can be legitimately broken for good reason. In other words, although permanence is to be desired and sought after, marriages can and do “fail,” and sometimes should “end.”
In a chapter called, “When It’s Time to Give Up,” Medved lists at least five scenarios in which “life with another becomes so depressing and punishing that after years of wear and disintegration, the marriage has to end.” These include one spouse’s unwillingness to change, to respond to communication, or to seek therapy. Interestingly, the “chop and run” abandonment scenario which appears so prominently throughout her book is also included.
The problem, of course, is that this list alone represents the reasons for so many divorces today. American civil divorce (as Medved highlights time and again) does not require the consent of both spouses. One spouse can shatter the other’s 20 years of emotional, psychological, spiritual, and financial investment in marriage and family life in a matter of weeks.
So, what to do? If the answer remains divorce in these scenarios, it seems to me we haven’t made much progress in our goal of reversing the divorce momentum. Somewhere, sometime, even victims of infidelity, abuse, emotional abandonment and unilateral divorce must refuse the culture’s call to “move on,” stand firm in their stations, and keep their wedding bands on.
Here is the real dilemma from my vantage point, the significance of which is currently being played out for all the world to see in Catholic and non-Catholic media alike. Roman Catholics remain married in the wake of civil divorce. Divorce and physical separation may be necessary in order to secure legal entitlements or ensure physical safety. But none of this means the marriage is over, or “failed.” Or that the time has come to “give up.”
This sacramental reality, which flows directly from the Church’s understanding of marriage as a reflection of our relationship to God Himself (Who never quits on us, or pronounces our relationship with Him failed) is not an arbitrary rule designed to lock the married faithful into a life of misery.
Among other earthly and spiritual benefits, the theological view of marriage as permanent is the surest safeguard available to maintain our own sexual integrity in the midst of carrying a very heavy cross.  The temptation to “move on” in the midst of marital strife before and after divorce is strong and unfortunately (as described above) encouraged by many peers who are misguided in their efforts to help.
Perhaps most importantly, spousal fidelity during times of marital crisis also serves to protect the children involved - not only from the physical and psychological risks associated with moving on to new partners, but the risk of future divorce itself.
Children of divorce whose parents remarry or cohabit have a substantial risk of divorcing as adults.  (Note: for a powerful treatment of the ontological consequences of divorce for children I strongly recommend the newly published “Torn Asunder: Children, the Myth of the Good Divorce, and the Recovery of Origins.”)
None of this stands as a criticism of Dr. Medved, who herself spends much time refuting the fantasy of divorce and remarriage as a “fresh start.” It is rather an opportunity for Catholics, and others who may share the Catholic view of marriage, to reflect with pride and hope on the Church’s steadfast teachings. For the Church’s position on lifelong marriage is one of hope precisely because it leaves open the possibility of marital reconciliation.
Early on in Don’t Divorce, Medved describes with some fascination a rare breed who actually believe in the indissolubility of the marriage bond:

“Did you ever meet someone who holds that marriage lasts until death, no matter what? Someone who would stay married even in unsatisfactory circumstances? There are such people, and there used to be a lot more of them.”

Indeed, they are called Catholics. And with some encouragement to rediscover and embrace their Church’s ancient wisdom on this matter, we may see their numbers rise again in years to come.
Dr. Hilary Towers is a developmental psychologist and mother of five children. Her work in behavioral genetics appears in a variety of academic journals and books. She writes for many popular publications and speaks frequently on the subjects of marriage and spousal abandonment, especially as those issues are treated within the Catholic Church.
- See more at: https://www.mercatornet.com/features/view/dont-divorce-powerful-arguments-for-saving-and-revitalizing-your-marriage/19671#sthash.xeMZv5a3.dpuf