A vaccination campaign is underway in Nigeria to contain an outbreak of meningitis C, a strain of meningitis which first emerged in the country in 2013. Since the beginning of this year, the country has reported 4637 suspected cases and 489 deaths across five states. 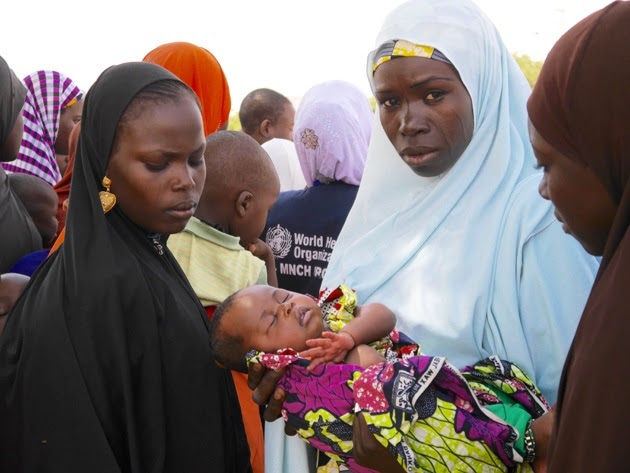 WHO/A. Clements-Hunt
The International Coordinating Group (ICG) on Vaccine Provision, which coordinates the provision of emergency vaccine supplies during outbreak emergencies, has sent 500 000 doses of meningitis C-containing vaccine to Nigeria to combat the epidemic. The vaccines, funded by Gavi, the Vaccine Alliance, have been administered in Zamfara and Katsina states, which are the worst affected by the outbreak. An additional 820 000 doses of a meningitis C conjugate vaccine – a donation from the UK government to the World Health Organization (WHO) - is being sent to the country.
In the last week, the ICG, which is managed by the International Federation of Red Cross and Red Crescent Societies (IFRC), Médecins sans Frontières (MSF), the United Nations Children’s Fund (UNICEF), and WHO, has also sent 341 000 doses of the Gavi-supported meningitis C-containing vaccine to Niger, where there are over 1300 suspected cases of the disease in districts that border with Nigeria and in the Niamey region of the country.
Meningococcal meningitis is a bacterial form of meningitis, a serious infection of the thin lining that surrounds the brain and spinal cord and can cause severe brain damage. Meningococcal meningitis is fatal in 50% of cases if untreated. Though cases of meningitis occur throughout the world, large, recurring epidemics affect an extensive region of sub-Saharan Africa known as the “meningitis belt” which includes 26 countries from Senegal in the west to Ethiopia in the east.
There are several different types of meningococcal meningitis (A, C, W, etc.) that can cause epidemics. Substantial progress has been made in recent years in protecting Africa from disease due to one of the main epidemic types, through the successful introduction of the Men A conjugate vaccine (MACV) against meningitis A. Since MACV was introduced in 2010, more than 260 million people have been vaccinated across 19 countries. This has resulted in a reduction of the number of meningitis cases by more than 57%. Much work, however, remains to be done to protect the region from meningitis C outbreaks and other types of the disease.
In addition to the use of vaccinations to prevent the transmission of meningitis, 20 000 vials of antibiotics have been sent by the ICG to treat people who have the disease in Nigeria. “Vaccination can drastically reduce the magnitude of the epidemic,” says Dr Sylvie Briand, Director of Infectious Hazard Management for WHO. “But in addition, it is essential to strengthen the care of all those affected by the infection and to ensure those people living in hard-to-reach areas can get treatment.”
The Nigeria Centre for Disease Control, with support from WHO, US CDC, UNICEF and other partners, is leading and coordinating the response to the ongoing outbreak, including intensified surveillance, capacity building for case management and risk communication. WHO’s Country Office in Nigeria, including a number of field offices, have been supporting the government since the outbreak began. An additional team of WHO of meningitis experts has arrived in Nigeria to provide additional epidemic response. “In addition to improving the care of the sick, we are focusing on ensuring accurate information about the spread of the outbreak is available as quickly as possible to help us make the most effective use of vaccines,” says Dr Wondimagegnehu Alemu, WHO Representative to Nigeria.

The emergence of meningitis C in Africa
Since 2013, there have been outbreaks of meningitis C in Nigeria, initially limited to a few areas in Kebbi and Sokoto states in 2013 and 2014. In 2015, however, there were more than 2500 cases of the disease across 3 states in Nigeria as well as 8500 cases in Niger.
Concerns about vaccine supply
Most vaccines currently being used for meningitis C outbreaks in Africa are polysaccharide vaccines, which are in short supply as they are being phased out in other parts of the world. The more effective and long-lasting conjugate vaccines, however, are not readily accessible for outbreak response in the region. The ICG global emergency stockpile currently has approximately 1.2 million doses of meningitis C-containing vaccines left.
“The very limited supply of vaccines to control outbreaks of meningitis C can affect our ability to control these epidemics,” says Dr Olivier Ronveaux, WHO meningitis expert. “In the long term, the accelerated development of affordable and effective conjugate vaccines to cover all epidemic types of meningitis is a high priority for WHO and partners.”
Nigeria and Meningitis A
In the past, Nigeria has suffered large-scale outbreaks of meningitis A. In 2009, such an outbreak in the country caused over 55 000 cases with close to 2500 deaths. Niger was also affected, with 13 000 cases and 550 deaths. However, preventive mass vaccination campaigns supported by Gavi and partners, using the safe and effective MACV in Niger (2010-11) and Nigeria (2011-14) have provided high and long-term protection against the bacteria. Since 2010, less than 20 cases of meningitis A have been reported from all vaccinated areas in the region. WHO recommends the continued roll-out of the Men A conjugate vaccine campaigns along with its introduction into routine immunization to prevent a major recurrence of devastating meningitis A epidemics.
Useful links:
International Coordinating Group (ICG) on vaccine provision for meningitis:http://www.who.int/csr/disease/meningococcal/icg/en/
Map of meningitis belt:http://gamapserver.whoint/mapLibrary/Files/Maps/Global_MeningitisRisk_ITHRiskMap.png?ua=1&ua=1&ua=1
Meningococcal meningitis Fact Sheet:  http://www.who.int/mediacentre/factsheets/fs141/en/
Source:
http://www.who.int/emergencies/nigeria/meningitis-c/en/
Publicado por salud equitativa en 7:42