We rapidly assessed the health of Ebola virus disease (EVD) survivors in Kenema, Sierra Leone, by reviewing medical charts of all patients attending the Survivor Clinic of Kenema Government Hospital. Data were abstracted on signs and symptoms at every attendance. As of November 2015, a total of 621 attendances by 115 survivors with laboratory-confirmed EVD were made to the Survivor Clinic. Most (60.9%) survivors were women. Survivors’ median age was 28 years (range 0.25–70 years). Survivors attended the clinic a median of 5 times (range 1–21 times) each, and the median time from EVD discharge to attendance was 261 days (range 4–504 days). The most commonly reported signs and symptoms among the 621 attendances were headache (63.1%), fever (61.7%), and myalgia (43.3%). Because health needs of EVD survivors are complex, rapid chart reviews at survivor clinics should be repeated regularly to assess the extent of illness and prioritize service delivery.
After Ebola virus disease (EVD) emerged in Sierra Leone in 2014, a total of 8,704 confirmed cases and 3,955 deaths had been reported as of the declaration of EVD transmission-free status on November 7, 2015 (1). Approximately 4,000 survivors are in the country, and evidence of the frequency and duration of sequelae over an extended period is limited in this cohort.
Recently published studies highlight the occurrence of post-EVD complications, such as uveitis (2,3) and encephalopathy (4), but these are isolated investigations. Evidence on the prevalence of these and other sequelae is increasing. There is a growing body of evidence on the burden of these and other sequelae, including 1 report based on a survey of 81 survivors in Kenema (Sierra Leone), which found that nonspecific symptoms, such as arthralgia, headache, and myalgia, persist for months after recovery from acute EVD (5–7). Many survivors also face EVD-related stigma and rejection from their communities (5,8) and suffer with posttraumatic stress disorder, depression, or anxiety (5,7–9). Furthermore, new ocular problems, such as uveitis, are commonly reported among survivors (2,5,6,10). A summary of the literature on these sequelae was presented in a recently published review article, but evidence from the 2014–15 West Africa outbreak had a maximum duration of follow-up of 1 year (11).
To rapidly assess the health of survivors in Kenema District, we reviewed the medical charts of all patients of the Survivor Clinic at Kenema Government Hospital (KGH) to determine the frequency of possible EVD-related sequelae among persons in this cohort, many of whom had been in convalescence for >1 year. Secondarily, we determined the frequency of diseases diagnosed within this group.

KGH is the major Ministry of Health and Sanitation, Government of Sierra Leone, referral hospital in Kenema District, the third most populous district in Sierra Leone (population 609,873 [Sierra Leone Population and Household Census 2015, https://www.statistics.sl/wp-content/uploads/2016/06/2015-Census-Provisional-Result.pdf]). In October 2014, an EVD Survivor Clinic was opened at KGH to provide treatment and care at no cost to survivors. This nurse-led clinic has support from an on-call medical doctor and provides treatment for minor complaints and mental health counseling. The Ministry of Social Welfare, Gender and Children’s Affairs of the Government of Sierra Leone maintains a register of EVD survivors in Kenema to facilitate the provision of benefits from the government and nongovernmental organization partners. As of November 2015, records from the Ministry of Social Welfare, Gender and Children’s Affairs in Kenema indicated that 162 EVD survivors were registered to receive benefits there.

After a rapid review of the literature, we developed an electronic proforma to collect demographic data and signs and symptoms previously reported as EVD sequelae using Microsoft Excel 2010 (Microsoft Corp., Redmond, WA, USA) (5). A close-ended list of signs and symptoms was used for consistent data collection. This list included fever because signs and symptoms reported with fever might indicate other acute infectious diseases, rather than EVD sequelae. Data were then abstracted from individual hard copy medical charts for all patients who attended the Survivor Clinic during November 10–13, 2015, by a medical doctor (A.O.V.) and entered by the lead author (H.M.).
For each patient, we collected name, sex, age, address, and date of discharge from KGH after the diagnosis and treatment of EVD and for each of their attendances during convalescence, their complaints (signs and symptoms), and differential diagnoses. Each sign and symptom was collected as a binary variable (yes/no), and the differential diagnoses were entered as open-ended text (verbatim from the medical chart); this text was later queried to generate a list of diseases and conditions by searching for selected text. After entry, a unique identifier was generated for each patient, and personally identifiable information was stripped from the dataset and stored separately on a password-protected terminal at the World Health Organization in Kenema. These patients’ identities were then cross-referenced against the national viral hemorrhagic fever database developed by the US Centers for Disease Control and Prevention (Atlanta, GA, USA) (12) and maintained by the Kenema District Health Medical Team EVD Response Centre to confirm these patients had laboratory-confirmed EVD.

Data analysis was performed on the anonymized dataset and restricted to patients with confirmed EVD. We calculated the time (days) from EVD discharge to attendance date and determined attendance-level frequencies of signs and symptoms (first among all attendances, then among attendances during which fever was not reported). To determine which signs and symptoms were associated with febrile presentation, we assessed associations between each and fever (yes/no) using univariate generalized estimating equations (GEE) logistic regression to account for the clustering of attendances by patient. We also determined associations between fever and age (quartiles), sex, and time since EVD discharge (quartiles) using univariate GEE logistic regression. Similarly, to determine whether signs and symptoms varied between children (<18 adults="" age="" and="" class="text-underline" of="" span="" style="line-height: 25px; text-decoration: underline;" years="">>
18 years of age), we determined associations between age and each sign and symptom using univariate GEE logistic regression, then in GEE models adjusted for the time since discharge. All data cleaning, management and analysis were performed by using Stata version 13.1 (StataCorp LP, College Station, TX, USA). We considered p values <0 .05="" be="" p="" significant.="" statistically="" to="">

This review of medical charts was conducted as part of the response to the outbreak of EVD, a public health emergency of international concern (13). Patient consent was not sought because we performed a secondary analysis of medical chart data. We obtained approval for the review from the District Medical Officer (Ministry of Health & Sanitation).

Figure 1. Hospital discharge and attendances for 115 survivors of laboratory-confirmed Ebola virus disease (EVD) attending the Survivor Clinic at Kenema Government Hospital (KGH), Kenema, Sierra Leone), 2014–2015. A) Discharge from KGH after...
Patients attended the clinic a median of 5 times (range 1–21 times). Median time from EVD discharge to first attendance was 114 days (4–395 days) and from EVD discharge to any attendance was 261 days (4–504 days) (Figure 1). 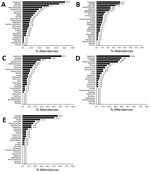 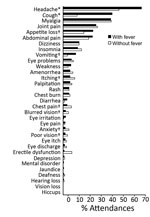 Figure 5. Diseases and conditions with at least a 5% frequency diagnosed at 621 attendances by 115 survivors of laboratory-confirmed Ebola virus disease at the Survivor Clinic at Kenema Government Hospital, Kenema, Sierra...
Of the 621 attendances by the 115 survivors, the most commonly listed differential diagnoses were malaria (52.8% [95% CI 48.8%–56.8%]), musculoskeletal pain (36.1% [95% CI 32.3%–40.0%]), and respiratory tract infections (23.2% [95% CI 19.9%–26.7%]) (Figure 5). However, malaria was not routinely confirmed through diagnostic testing and often was diagnosed on the basis of clinical presentation.
For 45 (7.2%) attendances, musculoskeletal pain was given as the differential diagnosis either solely or in the presence of 1 of the following: abscess, diarrhea, erectile dysfunction, arthritis/sore throat, insomnia, “post-Ebola weakness,” scabies, or ulcer. For the 31 attendances for which only musculoskeletal pain was diagnosed in the absence of fever, the median time from EVD discharge was 231 days (range 43–464 days).

We acknowledge Gladys Gassama and Hawa Foday for facilitating access to survivors’ medical charts. We also acknowledge Catherine O’Connor for her assistance in providing key references and Kevin Mohammed for his assistance formatting the figures.