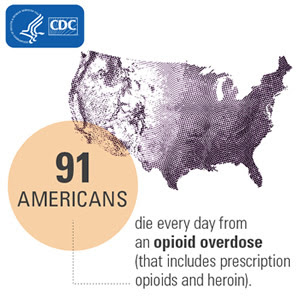 More than 300,000 Americans have lost their lives to opioids—prescription and illicit – since 2000, according to new data published today in CDC’s Morbidity and Mortality Weekly Report. The new report examines opioid overdose rate data and identifies trends by four opioid drug categories, by demographics, and by states. These new 2015 data indicate:
This new report also includes state analyses of death certificate data for opioid overdoses in 28 states with consistent and high quality reporting of specific drugs involved in an overdose. During 2010–2015, the rate of drug overdose deaths in the U.S. increased in 30 states and DC, remained stable in 19 states, and showed decreasing trends followed by increases in two states.
Regionally, natural and semi-synthetic opioid death rates increased in the Northeast and South. Synthetic opioid and heroin death rates increased in all regions from 2014-2015.

What Can Be Done

This new report highlights the increasing trend of opioid abuse, and the urgent need to prevent opioid use disorder and overdose deaths. The findings indicate four ways to prevent overdose deaths and reduce drivers of this epidemic including: