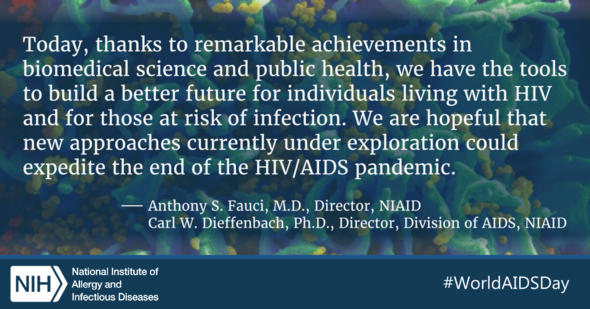 In a new statement marking World AIDS Day, NIAID Director Anthony S. Fauci, M.D., and Carl W. Dieffenbach, Ph.D., director of the NIAID Division of AIDS, reaffirm the Institute’s commitment to supporting HIV research in an effort to end the pandemic. The leaders also highlight the extraordinary achievements in biomedical science and public health that herald a better future for those living with HIV or at risk for HIV infection.


This year, the world marked the 35th anniversary of the first published reports of what would come to be known as HIV/AIDS. This disease has wrought enormous suffering and devastation and caused more than 35 million deaths. Yet today, thanks to remarkable achievements in biomedical science and public health, we have the tools to build a better future for individuals living with HIV and for those at risk of infection. We are hopeful that new approaches currently under exploration could expedite the end of the HIV/AIDS pandemic.
The greatest scientific accomplishment in HIV research has been the development of effective treatments that suppress the virus and prolong the lives of those living with HIV. Over time, scientists have refined and optimized antiretroviral therapy, delivering safer, more effective drugs that are easier to take. Today, a person living with HIV on antiretroviral therapy can expect to live a nearly normal lifespan.
Antiretroviral therapy has been transformational for both individuals and communities. Large studies conducted in diverse settings, from U.S. cities to African villages, have demonstrated the power of treatment to preserve the health of those living with HIV. Additionally, studies have proven that when an individual living with HIV is on antiretroviral therapy and the virus is durably suppressed, the risk that he or she will sexually transmit the virus is negligible. Research also has repeatedly demonstrated that HIV incidence diminishes when HIV testing is aggressively implemented, individuals with HIV infection are linked to treatment, and support is provided to keep them in care. The power of treatment as prevention cannot be underestimated in helping to achieve global targets to dramatically reduce new infections and improve the health of those already living with HIV.
The National Institutes of Health (NIH) is supporting the development of new, innovative methods to prevent the spread of HIV, building on proven HIV prevention tools such as antiretroviral treatment; condoms; voluntary medical male circumcision; and pre-exposure prophylaxis (PrEP), a daily pill that uninfected people can take to prevent infection. Earlier this week, NIH announced the start of HVTN 702, a large HIV vaccine efficacy trial in South Africa that builds on the modest success of the RV144 vaccine trial conducted in Thailand. The HVTN 702 vaccine candidate is designed to prevent infection by the HIV strain most commonly found in southern Africa. About 3,700 people become infected with HIV every day in sub-Saharan Africa.
In April, NIH launched the Antibody-Mediated Prevention Trial (AMP) to test whether a broadly neutralizing antibody delivered intravenously to uninfected individuals is safe, tolerable and effective at preventing HIV infection. Many scientists believe that if an HIV vaccine could elicit broadly neutralizing antibodies in people, it would protect them from infection. By giving participants this antibody directly, researchers expect to gain critical insights to inform HIV prevention and vaccine science.
NIH is testing HIV prevention options that address the unique needs of women, such as a vaginal ring infused with the antiretroviral drug dapivirine, which reduced the risk of HIV infection by only a modest 27 percent in a large clinical trial reported this year. Additional analyses suggest that this product may be much more effective when used regularly. A study launched in July aims to clarify further the relationship between adherence to the ring and efficacy, as well as to understand better the complexities women face when adhering to a vaginal ring.
Science has made remarkable strides in preventing the transmission of HIV from mother to infant during pregnancy, birth and breastfeeding. This summer, researchers reported the results of the PROMISE study, which demonstrated that for mothers living with HIV whose immune systems are in good health, taking a three-drug antiretroviral regimen during breastfeeding essentially eliminates HIV transmission to their infants.
While preventing new infections is essential, it remains critical that the 36.7 million people living with HIV globally benefit from cutting-edge science. Today’s treatments are lifesaving, yet people living with HIV still suffer from higher rates of chronic disease than their uninfected counterparts. Clinical trials are exploring interventions to help prevent these diseases. One example is the REPRIEVE study, a large, international trial exploring the use of a statin drug to prevent heart disease in women and men living with HIV.
Researchers also are working toward the goal of inducing sustained viral remission or absence of viral rebound following discontinuation of antiretroviral therapy. They are testing a number of approaches to successfully withdraw antiretroviral therapy in individuals whose virus is well controlled. In October, a provocative and potentially important advance was achieved in an animal study: An antibody directed against a cell surface marker involved in the homing of lymphocytes to the gut given together with antiretroviral therapy for 5 weeks in monkeys infected with a monkey version of HIV led to a sustained suppression of viral rebound for up to 2 years following discontinuation of all therapy. A study is now underway to explore this strategy in people living with HIV.
These global efforts bring hope on this World AIDS Day that an end to the HIV/AIDS pandemic is achievable. We applaud the trial participants, researchers, health care professionals, advocates and others who are working to make this future a reality.
Publicado por salud equitativa en 6:05