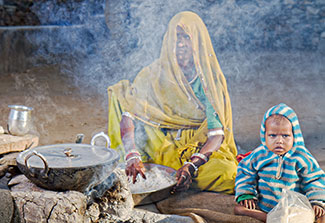 ©2014 Louis Kleynhans, Courtesy of Photoshare
A woman cooks supper in Rajasthan, India.
Household air pollution created by using wood, coal and other solid fuels for cooking and heating homes is a leading cause of respiratory and cardiovascular diseases worldwide, and causes more than 4 million premature deaths each year, according to the WHO. To tackle this global health problem, the NIH is funding a multi-country study to determine if a widely available, clean, alternative cooking fuel significantly reduces deaths and illnesses, especially in women and children who suffer the greatest exposure. This is the first large-scale trial to investigate whether use of cookstoves that run on liquefied petroleum gas (LPG) improve air quality sufficiently to provide measurable health benefits and can be effectively adopted in real world situations.
The NIH, with support from the Bill and Melinda Gates Foundation, is investing up to $30.5 million in the 5-year study. The research is NIH's contribution to a broader international effort totaling more than $50 million to conduct research in 30 countries aimed at discovering how to prevent and manage chronic lung diseases. That initiative is being coordinated by the Global Alliance for Chronic Diseases (GACD), a coalition of the world's largest public funders of health research.
"Indoor air pollution caused by cookstoves is one of the top health risks in developing countries, causing deaths from low birth weight among babies, pneumonia in young children, and heart and lung problems in adults," said NIH Director Dr. Francis S. Collins. "By working with our global partners on alternative fuel solutions, we have an opportunity to reduce that risk significantly for millions of people."
Three billion people worldwide - most of them in low- and middle-income countries (LMICs) - rely on solid fuels for cooking and heating, according to the WHO. The resulting indoor pollution, which includes small particles that can lodge deep in the lungs, causes pneumonia, chronic lung disease, cardiovascular and heart disease, stroke, cancer and other conditions.
NIH-supported researchers will conduct a randomized control trial of LPG cookstoves and fuel in four LMICs: India, Rwanda, Guatemala and Peru. U.S. investigators and collaborators in the trial sites will follow pregnant women, their offspring and older women to provide evidence of the impact the alternative fuel has on household air pollution, child health and development, and adult chronic diseases. Emory University in Atlanta is leading the study.
Investigators plan to recruit 800 pregnant women at each site and will randomly assign half to receive LPG stoves and a supply of gas. Mothers and infants will be followed until the children are 2 years old. Mothers will be evaluated to see if they suffer hypertension during pregnancy, while children will be examined to determine birth weight, growth and development progress, incidence of pneumonia and other health measures. In addition, several hundred older women will be enrolled at each site and monitored to assess cardiopulmonary, metabolic and cancer outcomes. Blood and urine samples will be collected for biomarker analysis. Homes in the control group will receive LPG stoves and fuel at the end of the trial.
The household air pollution trial is one of 13 research projects in the GACD program to address environmental lung diseases. The effort focuses on implementation and intervention research in LMICs, vulnerable populations in high-income countries and aboriginal communities.
"By working together on pressing global health issues such as indoor air pollution, we can share ideas, leverage resources, accelerate discovery and build international networks of scientists and communities that together are better able to produce solutions that benefit us all," noted Fogarty Director Dr. Roger I. Glass, who is also the NIH representative to the GACD and helped found the organization.
Since 2010, the GACD has coordinated international research partnerships on hypertension and diabetes research. A call for proposals focused on global mental health research is underway.