Just How Safe Is That Baby Teether?

Just How Safe Is That Baby Teether? 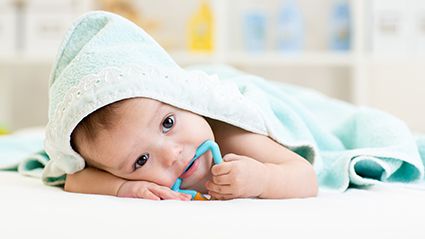 WEDNESDAY, Dec. 7, 2016 (HealthDay News) -- A chemical that's banned from baby bottles and children's drinking cups is still widely used in baby teethers, a new study finds.
Researchers in the United States who tested five dozen baby teethers found all of them contained bisphenol-A (BPA) and other endocrine-disrupting chemicals.
Studies in animals have shown that endocrine disruptors interfere with hormones and cause developmental, reproductive and neurological harm, according to the study authors.
Although most of the teethers were labeled BPA-free or non-toxic, all of them contained BPA, the study found. BPA is banned from children's drinking utensils in the United States and much of Europe.
The teethers also contained a range of parabens and the antimicrobial agents triclosan and triclocarban, which are also endocrine disruptors, the researchers said.
"The findings could be used to develop appropriate policies to protect infants from exposure to potentially toxic chemicals found in teethers," said study author Kurunthachalam Kannan and colleagues from the N.Y. State Department of Health's Wadsworth Center.
Baby teethers are used to soothe babies' gums when their teeth start coming in, at around 3 to 7 months of age.
Because babies suck on teethers, the presence of potentially harmful chemicals on the surface is concerning, the researchers said. The study authors said this is especially true since they found that BPA and other chemicals leached out of the teethers into water.
The 59 teethers analyzed were purchased online in the United States and tested for 26 potential endocrine-disrupting chemicals, the researchers said.
The results were published Dec. 7 in the journal Environmental Science & Technology.
SOURCE: Environmental Science & Technology, news release, Dec. 7, 2016
HealthDay
Copyright (c) 2016 HealthDay. All rights reserved.
News stories are provided by HealthDay and do not reflect the views of MedlinePlus, the National Library of Medicine, the National Institutes of Health, the U.S. Department of Health and Human Services, or federal policy.