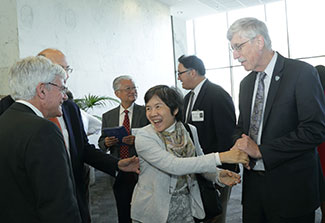 Photo by Bill Branson/NIH
The global health community celebrated Dr. Francis S.
Collins for his many contributions as NIH director.

​Many scientists were surprised when Dr. Francis S. Collins declared global health research would be among his top five priorities as NIH director. The grateful community gathered on Oct. 14 to pay tribute to him for his many accomplishments and review some of the significant global health advances NIH supported during his tenure.
Collins has been a stalwart advocate, said Fogarty director Dr. Roger I. Glass, as he opened the event, which was hosted by the NIH Global Health Research Working Group.
"You've really graced us over the last eight years and provided support beyond anything we could have imagined, extending the reach of global health to all the NIH Institutes and Centers, supporting young investigators to consider global health careers and building exciting new partnerships," added Glass, who also serves as Associate Director for Global Health Research at NIH.
Collins' accomplishments will have lasting impact, Glass said, noting they included helping launch the Consortium of Universities for Global Health, forging an NIH collaboration with the Bill & Melinda Gates Foundation and establishing two cross-cutting programs - the Medical Education Partnership Initiative (MEPI) and Human Heredity and Health in Africa (H3Africa) project. Collins also devoted considerable time to forging international relationships, hosting numerous visitors, including African presidents, the Queen of Spain and the first high-level Cuban delegation in 54 years. He also met with scientists around the world to monitor scientific progress and encourage the next generation of global health leaders. 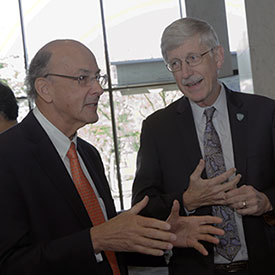 Photo by Bill Branson/NIH
Fogarty Director Dr. Roger I. Glass and NIH Director
Dr. Francis S. Collins reminisced about their many
foreign trips.
"Wherever we've travelled," Glass said, "he's gone out to sit down with students and encourage young researchers by telling them that the career choices they're engaged in are really worthy of being supported."
Collins has had a positive influence on research, both foreign and domestic, said Dr. Doug Lowy, Acting Director of the National Cancer Institute. "Francis has been an amazing force. But what we are celebrating today represents probably one-fiftieth of the impact that he has had since becoming NIH Director," Lowy said. "We owe him a tremendous debt of gratitude for his energy, vision and dedication."
Collins noted that his commitment to global health only deepened during his tenure. "This is a noble enterprise," he said. "It's not just something that we do, not just an academic search for knowledge, it's also about this compelling feeling that we're in this to help others and that doesn't stop at the boundaries of our country."
During the session, NIH global health leaders and their foreign grantees presented outcomes from varied projects including breast cancer research in diverse populations; investigations of the molecular and genetic basis of hearing and vision impairment in Pakistan; research collaborations in Haiti; studies to improve pregnancy outcomes in low-income countries; the increasing emphasis on global mental health; the growing burden of stroke; and genomics research in sub-Saharan Africa. 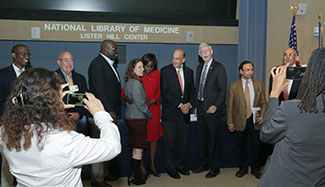 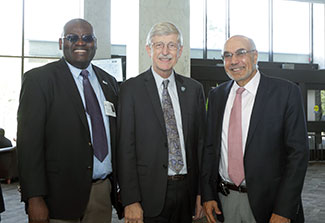 Photo by Bill Branson/NIH
NIH Director Dr. Collins (center) celebrated the global health
accomplishments of grantees including Dr. Clement
Adebamowo of Nigeria (left) and Dr. Bill Pape of Haiti (right).
International collaborations are particularly important for scientists studying genomics, Collins observed. "We are all Africans," he said. "If you want to study genetic variation and you really want to get the full picture, you have to go to Africa because that's where it all started, that's where the founder population is, that's where the richness of human genetic variation is to be found."
Collins described as "electrifying" the progress he saw during visits to Africa to meet with grantees of the H3Africa and MEPI programs. "There's something happening there," he said, "a sense of excitement among the young investigators and a growing recognition by African governments that this is something they should invest in. We should try to push that."
Collins plans to continue his efforts to catalyze development of Africa's science and technology enterprise, empower local researchers and spur discoveries to improve health among the world's poorest populations.
"What a great outcome it would be, to see all the members of our human family given the opportunity to flourish in a new way," Collins said.