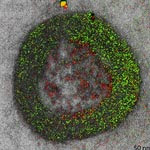 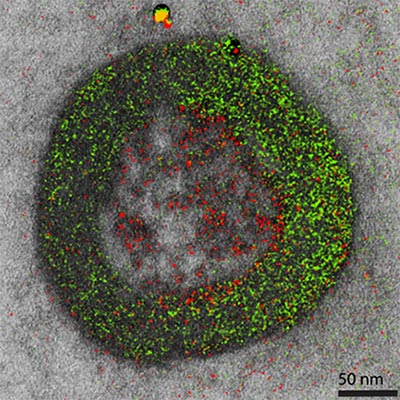 Color electron micrograph of an endosome, a cell organelle. Credit: Ranjan Ramachandra, UCSD
As his Christmas gift to himself each year, the late biochemist Roger Tsien treated himself to two weeks of uninterrupted research in his lab. This image is a product of those annual sojourns. While it may look like a pine wreath dotted with crimson berries, it is in fact one of the world’s first color electron micrographs—and the method used to create it may dramatically advance cell imaging.
Electron microscopy (EM) is a time-honored technique for visualizing cell structures that uses beams of accelerated electrons to magnify objects up to 10 million times their actual size. Standard EM images are in grayscale and any color is added in with computer graphics programs after the image is made. With their new technique, Tsien, who received a Nobel Prize for his development of green fluorescent protein into a tool for visualizing details in living cells using light microscopes, and his colleagues have found a way to incorporate color labeling directly into EM.
Check out more of our winter holiday-themed Cool Image collections

The techniques devised by Tsien and co-workers including Stephen Adams

, co-director of the NIGMS-supported National Center for Microscopy and Imaging Research

, employ serial applications of several different rare earth metals called lanthanides. They serve as labels. Next, the researchers used a kind of EM called electron energy-loss spectroscopy or EELS. EELS differentiates among the lanthanides by measuring differences in the way each one absorbs or deflects energy from an electron beam.
To make their “wreath”—actually a cell organelle called an endosome—the researchers first stained the sample with a lanthanide called cerium, which appears green under EELS. Then they removed  excess cerium—the most difficult step to perfect—and applied the element praseodymium. Praseodymium targeted a second protein of interest in the sample and registers as red under EELS. Finally, the scientists overlaid the green and red images (each highlighting distinct regions of the endosome) on a traditional grayscale EM image to create a composite image.
Tsien and coauthors described the multicolor EM technique in a paper published in Cell Chemical Biology in November. Though still very new, the technique is already providing scientists with previously unobtainable information about cell structure, protein movements within and between cells, and views of cell components at a level of detail not possible with light microscopy. For example, the wreath EM provides vibrant proof confirming a hypothesis about the disparate fates of two molecules that are too small to be seen with light microscopes. Certain short proteins that ferry molecular cargo into cells (called cell-penetrating peptides or CPPs) were thought to be taken up by the cell into the interior of endosomes. The red “berries” in the wreath are one kind of CPP that is labelled with praseodymium and, as hypothesized, they did end up inside the endosome. In the same image, another molecule that is known to accumulate at the endosomal surface appears as vivid green when stained with cerium.
Tsien’s untimely death in August means he will not contribute to the further advancement of this transformative technique. But his innovations will inspire Adams, Ellisman and a new generation of scientists to continue developing new and colorful ways to see the things inside cells. Adding color to electron microscopy will stand as Tsien’s fitting last gift to the scientific world.
This work was funded in part by NIH under grants R01GM086197, P41GM103412 and T32GM007752.
Publicado por salud equitativa en 3:47