We studied anthrax immune globulin intravenous (AIG-IV) use from a 2009–2010 outbreak of Bacillus anthracis soft tissue infection in injection drug users in Scotland, UK, and we compared findings from 15 AIG-IV recipients with findings from 28 nonrecipients. Death rates did not differ significantly between recipients and nonrecipients (33% vs. 21%). However, whereas only 8 (27%) of 30 patients at low risk for death (admission sequential organ failure assessment score of 0–5) received AIG-IV, 7 (54%) of the 13 patients at high risk for death (sequential organ failure assessment score of 6–11) received treatment. AIG-IV recipients had surgery more often and, among survivors, had longer hospital stays than did nonrecipients. AIG-IV recipients were sicker than nonrecipients. This difference and the small number of higher risk patients confound assessment of AIG-IV effectiveness in this outbreak.
Bacillus anthracis is identified as a select agent subject to select agent regulations (1–3) and as a potential bioweapon that presents a high risk to the US public (4,5). Production of lethal toxins and edema toxins by B. anthracis is central to the bacterium’s pathogenesis (6–8). The Centers for Disease Control and Prevention (CDC) guidelines now recommend that patients with clinical evidence of systemic anthrax disease receive an antitoxin agent in combination with antimicrobial agents (9).
Anthrax immune globulin intravenous (AIG-IV; current trade name Anthrasil, manufactured by Emergent BioSolutions Inc., Rockville, MD, USA) is one of the few antitoxin agents approved by the Food and Drug Administration (FDA) and included in the Strategic National Stockpile (10). It is a polyclonal human antibody prepared from the serum of persons previously vaccinated with anthrax vaccine adsorbed (BioThrax; Emergent BioSolutions, Gaithersburg, MD, USA). Because of the infrequency of invasive B. anthracis infection, AIG-IV approval was based on its efficacy in anthrax animal models in combination with safety data from healthy humans (11,12). Therefore, although AIG-IV has been the only antitoxin therapy administered clinically since the 2001 US anthrax outbreak, its actual efficacy in humans is unknown. Reviewing clinical experiences where AIG-IV has been administered for anthrax is important to inform future use of this agent and of antitoxin agents in general.
Although AIG-IV use has been reported in 3 isolated anthrax cases (13–16), the largest clinical experience with it came during an outbreak of B. anthracis soft tissue infection in injection drug users in the United Kingdom during 2009–2010. These cases were secondary to heroin injections contaminated with the same B. anthracis strain (17–24). Of the 52 confirmed cases in this outbreak, 47 occurred in Scotland, and 15 of these persons received AIG-IV through the coordinated efforts of CDC, Health Protection Scotland (HPS), and the Scottish National Anthrax Outbreak Control Team. Although the epidemiology of this outbreak and the clinical characteristics of a subgroup of 27 patients has been reported, a review of experience with AIG-IV itself and its effects on recovery has not (18,25). Here we examine that experience in 15 recipients and 28 nonrecipients of the agent.

This study used de-identified data collected during routine hospital care of patients. The Office of Human Subjects Research from the Clinical Center at the National Institutes of Health (Bethesda, MD, USA) determined the study to be exempt from institutional review board review.

Representatives of CDC and the Scottish National Anthrax Outbreak Control Team directly involved with the 2009–2010 UK anthrax outbreak provided information about how AIG-IV was distributed and administered. Data from a previously published survey of physicians caring for patients during the outbreak were also reviewed (18).

Data regarding the clinical characteristics and outcomes of patients came from 2 sources. One was clinical data CDC obtained under its AIG-IV emergency investigational new drug application (E-IND). The other was from a previous survey of physicians caring for patients during the outbreak that had sought information about the disease characteristics, care, and outcome of patients (18). This previous survey did not compare AIG-IV recipients and nonrecipients.

We analyzed parameters for which >50% of patients had data reported for that parameter. The sequential organ failure assessment (SOFA) scores analyzed were those recorded by physicians caring for patients (27). Categorical data were analyzed with χ2 if not sparse or with Fisher exact test if otherwise. Normally distributed continuous data were analyzed by calculating the mean ± SE and compared between groups by using 2-sample t tests. Otherwise, data were summarized with medians (interquartile range [IQR]). Times from exposure to symptom onset; from symptom onset to hospital admission; and from hospital admission to anthrax diagnosis, surgery, AIG-IV administration, and intensive care unit (ICU) or hospital discharge were compared with Wilcoxon rank sum tests, and physical and laboratory findings not normally distributed were log-transformed and then compared by using 2-sample t tests. To assess the trend of LF over time, we used a linear regression model with a common slope and different intercepts for survivors and nonsurvivors. LF levels were log10-transformed, and a random subject effect was used to account for repeated measures. We considered 2-sided p values <0.05 to be significant without adjusting for multiple comparisons. All analysis were done by using SAS version 9.3 (SAS Institute, Cary, NC, USA).

During the B. anthracis outbreak in the United Kingdom during December 9, 2009–July 12, 2010, a total of 47 confirmed cases were reported in Scotland from 14 hospitals. A case was defined as confirmed on the basis of a positive bacterial culture or PCR result from blood or tissue or on paired serology samples showing increasing antibody protective antigen or LF titers (25).

During the outbreak, 15 patients received AIG-IV under the CDCs E-IND, and all treatments were from the same AIG-IV batch (Cangene Corp., Winnipeg, MB, Canada). CDC’s Division of Strategic National Stockpile provided the first set of AIG-IV doses for use on December 18, 2009, and a limited number of AIG-IV doses were available throughout the remainder of the outbreak. HPS distributed AIG-IV during the outbreak. Clinicians identified patients for AIG-IV treatment in accordance with criteria outlined in the E-IND and published by HPS (28). To be eligible to receive AIG-IV, patients had to have laboratory confirmation of B. anthracis infection based on positive cultures or PCR results; visualization of gram-positive bacilli from blood, tissue, or a normally sterile site; or other confirmed evidence of anthrax (e.g., positive paired serologic results as noted earlier) consistent with B. anthracis infection (Table 1). Having met these criteria, however, whether a patient was administered AIG-IV was at the discretion of the treating physicians and their impression that a patient would or would not benefit from this treatment.
Under the E-IND, patients receiving AIG-IV were assessed, and baseline status was recorded before AIG-IV administration. All patients received a single similar dose (420 U) of AIG-IV. Patients were then monitored during and after the infusion until discharge. Monitoring during infusion frequently occurred in the ICU. 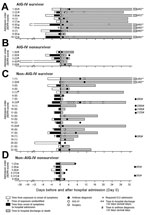 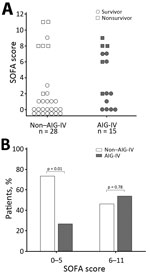 Four Patients from the Outbreak for Whom Data Were Unavailable

Figure 3. Individual LF levels (nanograms per milliliter) in 12 anthrax patients receiving AIG-IV from 10 h before until 50 h after treatment administration, Scotland, UK, 2009–2010. AIG-IV, anthrax immune hlobulin intravenous; LF,...
LF levels were available for 5 nonsurvivors and 7 survivors receiving AIG-IV and from no nonrecipients. These levels were examined over the period they were available for both nonsurvivors and survivors (10 h before and up to 50 h after AIG-IV administration). Before AIG-IV treatment, LF levels trended to be higher but did not differ significantly between nonsurvivors and survivors (p = 0.42) (Figure 3). Two survivors had LF levels <0 .1="" a="" after="" aig-iv="" and="" approaching="" common="" levels="" lower="" ml="" ng="" noticeably="" of="" other="" p="0.08).</p" patients.="" significance="" slightly="" slope="" than="" treatment="" trended="" with="">

We thank Yon Yu and Tina Bhavsar for their contributions and clarifications about AIG-IV E-IND data collected under the CDC-sponsored E-IND.
C.X. and P.Q.E. have received study reagents from Human Genome Sciences for other investigations.
The work was supported by the National Institutes of Health Intramural Research Program and the Clinical Center and by CDC.