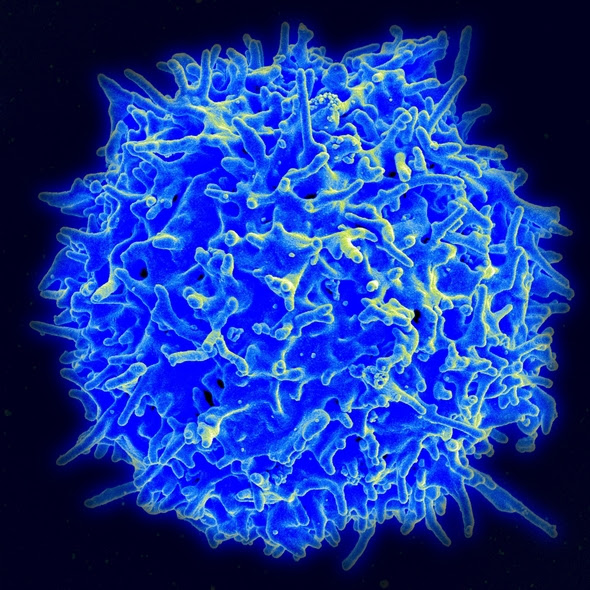 New research from investigators at the National Institute of Allergy and Infectious Diseases suggests the magnitude of differences between T lymphocytes, or T cells, may indicate an individual’s age and genetic predisposition to disease. Learning more about so-called cell-to-cell expression variation, or CEV, may further illuminate how the immune system functions and one day serve as a diagnostic tool to help implement precision medicine, according to the researchers.

NIH Scientists Develop Systematic Analysis of Cell-to-Cell Variation, May Augment Personalized Medicine Approach
November 15, 2016
Different cells of the human body differ greatly in structure and function. However, variation exists even among cells of one type. New research from investigators at the National Institutes of Health suggests the magnitude of such differences in T lymphocytes, or T cells, may indicate an individual’s age and genetic predisposition to disease. Learning more about so-called cell-to-cell expression variation, or CEV, may further illuminate how the immune system functions and one day serve as a diagnostic tool to help implement personalized medicine, according to the researchers. The scientists, led by John S. Tsang, Ph.D., of the Laboratory of Systems Biology at the National Institute of Allergy and Infectious Diseases, part of NIH, published their findings today in the journal Immunity.
In this first-in-human analysis, Dr. Tsang, computational biologist Yong Lu, Ph.D., and their colleagues used data from a previous study in which blood samples from a healthy, unrelated cohort of individuals were drawn at an initial visit, one week later, and at two months. The scientists analyzed different subtypes of T cells(link is external)—immune cells that facilitate, regulate and direct the destruction of infected or cancerous cells—in these samples by quantifying protein expression in single cells. While identifying cell-surface proteins is a standard method for categorizing T cells, the NIH team also quantified cell-to-cell variation of protein levels and compared how such differences varied among individuals and in a single person over time.
Although the degree of cell-to-cell variation for many protein and cell combinations remained relatively constant in individuals over the two-month observation period, the magnitude of variation seemed to differ among individuals and could serve as unique personal markers, the authors write. Furthermore, certain variations were associated with age and carrying genes linked to disease. For example, individuals who carried a genetic variant associated with an increased risk for developing asthma were more likely to have more variable expression of a specific protein called CD38 among a subtype of T cells. The team plans to use the framework they developed to help identify potential CEV biomarkers for autoimmune diseases and other health problems. Learn more about this study and explore interactive figures portraying the study data.
ARTICLE:Y Lu et al. Systematic Analysis of Cell-to-Cell Expression Variation of T Lymphocytes in a Human Cohort Identifies Aging and Genetic Associations(link is external). Immunity DOI: 10.1016/j.immuni.2016.10.025 (2016).
WHO:Principal investigator John S. Tsang, Ph.D., Systems Genomics and Bioinformatics Unit Chief in the Laboratory of Systems Biology in NIAID’s Division of Intramural Research, is available to comment.
Publicado por salud equitativa en 10:13