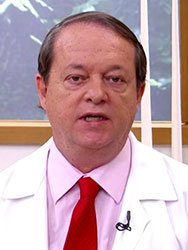 Fábio Mesquita, M.D., PH.D.
Dr. Fábio Mesquita is the technical officer in charge of HIV and viral hepatitis for the WHO in Jakarta. A globally recognized harm reduction specialist, he has spent most of his career in his native Brazil, where he served from 2013 until August 2016 as director of the Health Ministry’s department of STDs, AIDS and hepatitis. Dr. Mesquita devised and managed Brazil’s first city-specific AIDS response, which became the basis of the country’s successful national HIV program. He has previously worked on HIV/AIDS programs in Indonesia, as well as in the Philippines and Vietnam.

How did Fogarty training advance your career?
I would say that my international engagement and career are completely the result of the Fogarty-funded training and research I did in the 1990s. First, I attended a research training course on AIDS from 1990-1991 in the Department of Epidemiology at the University of California, Berkeley. It helped improve my research skills, and taught me to critically analyze my work and publish the findings. That was a big change from the way we do things in Brazil, and it was key to launching my career.
In Brazil, we have extremely good people working very hard on interesting projects but we’re not used to publishing what we do - especially not in English. When we do publish, it’s normally in Portuguese, which limits the audience the article will reach. So one of the best things I learned during that training is to publish whatever you are doing, and today, I publish at least one paper per year.
I went back to Berkeley in 1999 with additional support from Fogarty. The focus of my research was the dissemination of HIV among people who inject drugs in the city of Santos, in Sao Paulo state, on understanding their behavior and analyzing seroprevalence rates. I set up Brazil’s first city AIDS program in Santos, which at the time had the highest rate of HIV infection throughout the country, with half the cases related to people who injected cocaine. That research and the lessons I learned in my training at Berkeley have been crucial for my career.
How has Fogarty helped Brazil respond to HIV?
Brazil is considered to have one of the best responses to HIV in the developing world - comprehensive, well-structured and successful. We provide free antiretrovirals to everyone with HIV/AIDS, have an effective harm reduction program and offer HIV testing at primary care facilities, among other things. The AIDS program in the city of Santos, which I led after completing my Fogarty training, was the main inspiration for the national HIV response in Brazil. 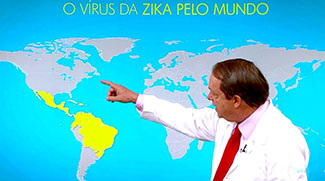 Pictures courtesy Dr. Fabio Mesquita
Dr. Fabio Mesquita, then director of the department of STDs,
AIDS and hepatitis at Brazil’s health ministry takes part in a
television show on the Rede Globo network in April 2016, on
the sexual transmission of Zika.
Brazil’s connection to Fogarty has been crucial to building the national HIV response. One of the heads of the STD, AIDS and Viral Hepatitis Department at the Ministry of Health in the 1980s, Dr. Lair Guerra de Macedo Rodrigues, very wisely connected us to Fogarty. After she left, almost all of the directors of the national AIDS program were former Fogarty trainees. We have led the national response to HIV for many years, and our Fogarty training was catalytic in developing the response.
How is Brazil building global health research capacity?
Brazil supports a great deal of south-south cooperation, particularly in Latin America, where we are especially active in poor countries like Paraguay and Bolivia. But this cooperation is more in the form of technical support or the donation of medicines. It’s very pragmatic in terms of saving lives or helping countries to develop their programs, but it’s not focused on research.
We also help build capacity for research in some of the African countries that speak Portuguese. We have developed a research component in Africa, but it’s not as advanced as we’d like it to be. In Brazil, we have a very strong scientific capacity and collaborate with many international agencies, including the NIH, but we must continually advocate for investments in science. We need to prioritize research funding - and not just AIDS research.
What are your goals for Indonesia?
Indonesia is considered by UNAIDS to have a growing HIV epidemic. With the fourth largest population in the world, it’s considered a critical country for the global AIDS response. The WHO was looking for someone with experience in facing challenges in developing countries to help the people of Indonesia lead the response to their HIV epidemic. My colleagues and I are working to build local capacity through targeted training programs, and transferring the knowledge and technology needed for a successful HIV response.