Births outside marriage decline in U.S.

The trend is largely due to higher immigrant births. 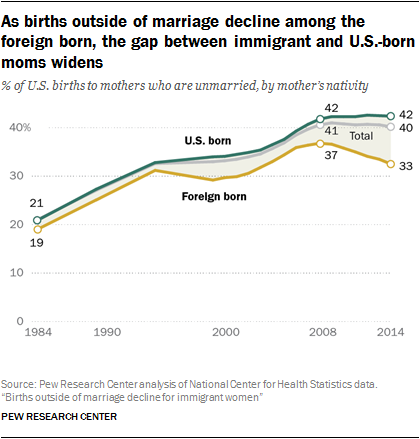 According the Pew Research Centre, the newest available data (2014) finds that 33% of all births to foreign-born mothers were to unmarried women, down from a peak of 37% in 2008, and that the rate has steadied for U.S.-born women at 42%.  The disparity between U.S.-born women and immigrant women now stands at almost 10%, the largest since records became available 30 years ago.  At that time 21% of babies were born to unmarried women overall.
One reason births outside of marriage among immigrants has decreased is a declining share of babies born to Latin American mothers, and an increasing number to Asian mothers. New foreign-born mothers from Latin America were roughly four times as likely as mothers from Asia to be unmarried in 2014.  The shifting origin of immigrant mothers is due to both a decline in immigrants from Latin America and dramatically falling birth rates among Hispanic immigrants.
More than half of all babies born to foreign-born women in the U.S. are to those from nine countries and one U.S. territory: Mexico, China, India, El Salvador, Guatemala, the Philippines, Honduras, Vietnam, Dominican Republic and Puerto Rico.  Among these, India stands out for its low share of births outside marriage (1%). New mothers from Honduras are most likely to be unmarried (66%).
Foreign-born mothers have not only helped to curb the share of babies born to unmarried mothers in the U.S., but they are also responsible for the long-term growth in annual births.  Growth in U.S. birth rates has been driven entirely by increasing numbers of babies born to immigrant women who are having disproportionately more children than their U.S.-born counterparts. In 2014, there were 58.3 births for every 1,000 U.S.-born women of childbearing age, and 84.2 among their foreign-born counterparts.  This is positive for a country struggling to recover from a childbearing slowdown sparked by the start of the recession in 2007.
It is also positive for U.S. babies if increasing numbers are being born into settled family environments with parents dedicated to each other and to them.

Tuesday is almost over in Sydney, but in the United States it has barely begun. Voters in the tiny New Hampshire town of Dixville Notch sent encouraging news to Hillary Clinton. Four of its eight voters backed her; two backed Donald Trump, one the Libertarian candidate Gary Johnson, and one Mitt Romney (a write-in). But there are many hours to go before the polls close in Hawaii.
Two years ago, most of us thought that this would be an expensive but lacklustre contest between Mrs Clinton (who else?) and a conventional GOP stalwart. But voters ignored the professional politicians and chose the extraordinary figure of Trump. Why? Journalists, historians and sociologists will be asking that question for years to come. Has the United States really changed or was this bitter, spiteful, emotion-driven campaign an anomaly?
In a very insightful analysis, MercatorNet's deputy editor, Carolyn Moynihan says No. The election reflects the dynamics of the changing American family, she argues. How could one possibly think that shrinking the basic cell of society and trashing marriage would leave politics unaffected?